Ghostlight Records will celebrate the release of Miss You Like Hell — Original Cast Recording with a special release concert at Joe’s Pub at The Public on Monday, October 8 featuring members of the creative team and original cast.  The event will benefit Madre (www.madre.org), an organization that works with migrant mothers and families separated by migration. The recording will be released in digital formats on Friday, October 5, with a physical CD release to follow later this year. The New York premiere production of the timely and emotional new musical was presented by The Public Theater (Artistic Director, Oskar Eustis; Executive Director, Patrick Willingham). With book and lyrics by Quiara Alegría Hudes, music and lyrics by Erin McKeown, and choreography by Danny Mefford, the show was directed by Public Theater Resident Director and Founder of Public Works Lear deBessonet, and starred Daphne Rubin-Vega and Gizel Jiménez. The recording was produced by Erin McKeown, with Kurt Deutsch serving as executive producer. To pre-order the album, please visit: https://www.ghostlightrecords.com/miss-you-like-hell-original-cast-recording.html 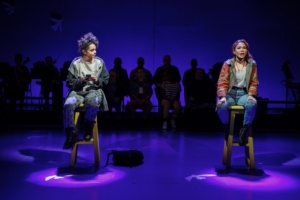 When Miss You Like Hell opened last season, it was hailed at “a fresh take on the American road story” by The New York Times, with The Daily Beast adding “The songs of antagonism, reconciliation, and soul-baring are beautifully orchestrated and sung.” Variety raved “Erin McKeown makes an impressive stage debut with music that is eclectic and appealing.” According to The Wrap, “The only new musical with songs approaching the insight and power of McKeown’s is The Band’s Visit.”

Tony and Pulitzer Prize-winning playwright Quiara Alegría Hudes and acclaimed, genre-breaking singer/songwriter Erin McKeown brought their highly anticipated new musical to The Public earlier this year, which ran from March 20 to May 13. Two-time Tony nominee Daphne Rubin-Vega is Beatriz, a flawed mom to 16 year-old Olivia, and an undocumented immigrant on the verge of deportation. After living estranged from each other for years, a mother and daughter embark on a road trip that crosses state lines. Together they meet Americans of different backgrounds, shared dreams, and complicated truths in this powerful new show with vast heart and fierce humor.

“Miss You Like Hell is important musical theater,” says the label’s founder Kurt Deutsch. “It sings of America right now. Gizel and Daphne give such heartfelt and beautiful performances that deserve to be preserved. Quiara is a genius. Erin, welcome to the theatre. We are honored to have you. Thank you Public Theater for producing the show. It is an honor to work with you on so many albums.” 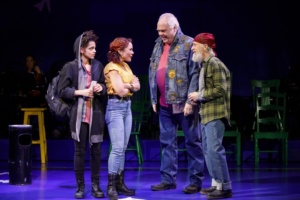 Ghostlight Records has previously collaborated with Quiara Alegría Hudes on their Grammy Award winning recording of In The Heights. The label has joined forces with The Public Theater on original cast recordings such as Bloody Bloody Andrew Jackson, Giant, First Daughter Suite, See What I Wanna See, and Fortress of Solitude.

Quiara Alegría Hudes (Book & Lyrics) is the first Latina to win the Pulitzer Prize for Drama. A playwright, strong wife and mother of two, barrio feminist and native of West Philly, U.S.A., her stage works include In the Heights (Tony Award for Best Musical), Water By the Spoonful (Pulitzer Prize for Drama), Daphne’s Dive, and The Happiest Song Plays Last.

Erin McKeown (Music & Lyrics) is a musician, writer, and producer who has released 10 albums since her 2000 debut, Distillation. As a bandleader, she has performed at Bonnaroo, Glastonbury, and Newport Folk Festivals. McKeown’s songs are a familiar presence on NPR and the BBC and have appeared in commercials, film, and television. A graduate of Brown, McKeown has been a resident artist at Providence, RI’s AS220, a 2011 fellow at Harvard’s Berkman-Klein Center, and the recipient of a 2016 writing fellowship from The Studios of Key West. Miss You Like Hell is her first theatrical composition.

Madre strengthens grassroots women’s organizations in war, disaster and their aftermath. We support our partners to meet urgent needs and to build communities that are safer and healthier for women and families. And we train and accompany our partners to advocate for lasting change. To advance social justice, women must be equipped to both meet urgent needs in their communities and advocate for human rights.  Our partners are grassroots women leaders who know best what threats their communities face and what women and girls need to thrive. When women work together, they create solutions. They build schools and clinics, set up shelters and counseling centers, deliver aid and more. Through this vital work, women build new skills and step up as leaders valued in their communities. What’s more, they gain new standing to demand policies that protect women’s rights. www.madre.org