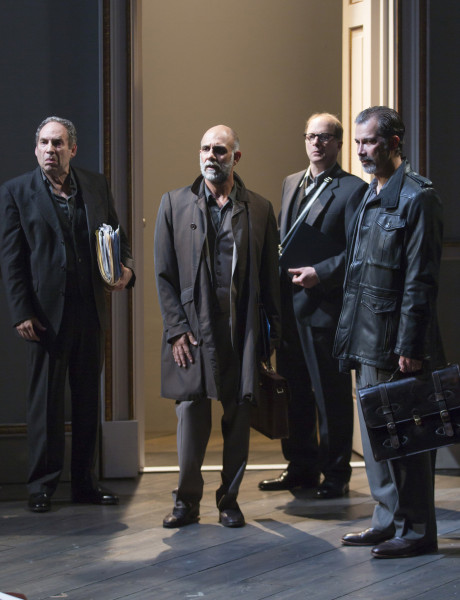 Oslo Proves When Talking Peace It Is Never Short or Easy

Oslo Proves When Talking Peace It Is Never Short or Easy 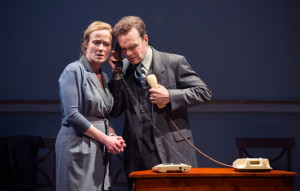 For close to three hours we watch as Israel and the PLO struggle to form some kind of truce that will lead to less blood shed. In the end as the title character offers hope, the audience is left with feeling that peace will come when pigs fly. J. T. Rogers semi autobiographical Oslo is well directed by Lincoln Center favorite Bartlett Sher who engages the space. 15 actors tell the story of the  historic turning point in Arab-Israeli relations. Hammered out in complete secrecy in Oslo, Norway, the Oslo Accord forced both sides to come to terms with each other’s existence. Oslo sketched out a peace process with a two-phase timetable. During a five-year interim period, Oslo envisioned a series of step-by-step measures to build trust and partnership. Palestinians would police the territories they controlled, cooperate with Israel in the fight against terrorism and amend those sections of the Palestine Liberation Organization (PLO) charter that called for Israel’s destruction. Israel would withdraw almost entirely from Gaza and in stages from parts of the West Bank. An elected Palestinian Authority would take over governance of the territories from which Israel withdrew. After this five-year interim period, negotiators then would determine a final peace agreement to resolve the thorniest issues. 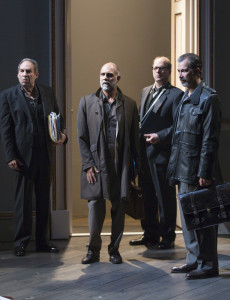 The Oslo Accords were orchestrated by Mona Juul (Jennifer Ehle) and her husband Terje Rod-Larsen (Jefferson Mayes). Larsen uses his wife and puts her career and her intregety in jeopardy as he lies from the very beginning.

From the start this plan was brought with internal problems. First it’s against Israeli law for any official to meet with the PLO, so two Palestinians, Ahmed Qurie (Anthony Azizi) and Hassan Asfour (Dariush Kashani), originally meet with two professors from the University of Haifa, Yair Hirschfeld (Daniel Oreskes) and Ron Pundak (Daniel Jenkins). We watch how these two sides form a bond.

Wanting to deal with someone higher up official from the foreign ministry of Israel Uri Savir (Michael Aronov), enters the picture. Azizi and Aronov are well-matched and more gets accomplished. Finally after Israeli lawyer (Joseph Siravo) gets involved, Israel’s Foreign Minister Shimon Peres (Oreskes) enters the negotiations.

In the end the PLO’s almost derailed the truce by changing it last minuets as the American’s butted in. In 2000 the Oslo peace process broke down fas the Israelis and the Palestinians made a strategic choice to return to violence, but it happened almost immediately after the Oslo agreement was signed. The Jewish fanatic who assassinated Rabin in 1995 derailing the peace. In 1996 the rightwing Likud returned to power under the leadership of Binyamin Netanyahu. He made no effort to conceal his deep antagonism to Oslo, denouncing it as incompatible with Israel’s right to security and with the historic right of the Jewish people to the whole land of Israel.

How can there be peace when neither side is willing to compromise?

Genevieve Rafter KeddyMay 21, 2022
Read More
Scroll for more
Tap
Eclipsed Writer and Star Working on Another Project For Disney
The Stars Come Out To Film, Promote and Hang Out