Othello Remix a Hip Hop Rappin Tale From The Bard

Othello Remix a Hip Hop Rappin Tale From The Bard 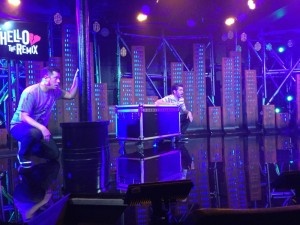 When I first saw Othello: The Remix at The National Alliance for Musical Theatre’s Festival, I knew this rhythm and rhyming tribute to Shakespeare was on it’s way to bigger and better places.  Now at the Westside Theatre the show is appealing to new audiences. The tragedy of Othello is told by a quintet of rap artists creating eight roles by using irresistible beats, face paced prose, wildly inventive language blending those rhyming couplets into a humor driven, tragic, touching and gripping theater for today’s younger generation. This is Shakespeare for the streets. 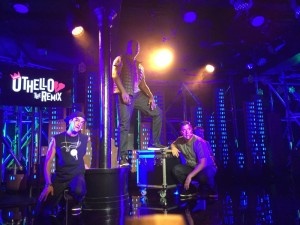 Othello (Postell Pringle) is now a Black rap artist, who’s got a label, a world tour and he’s betrothed to the heavenly-voiced Desdemona. Othello’s has demoted and created the master-minded Iago (GQ) who’s a little peeved and has grown rather malevolent that his best friend has given second billing to pretty boy, white bred boy-band poseur Cassio (a hysterical Jackson Doran), whom he despises. Iago uses Roderigo (JQ), whose a lovesick technogeek and dweeb. Roderigo adores Des even though he has never truly met her. Iago gets Rodrigo to fund his plan as Rodrigo trades in his  prized Masters of the Universe action figures, for love. Iago plots his revenge by driving Othello mad with jealously that Des has been unfaithful with Casio. Emilia (Doran) unwittingly hands over the handkerchief or in this case a gold bling necklace which is the straw that breaks Othello’s sanity. There is also Loco Vito (JQ), the head of Othello’s record label who is obsessed with tennis and Cassio’s fiery Latina girlfriend Bianca (again JQ) who’s a little peeved that Cassio’ star is on the rise.

In Remix Des never appears except as a heavenly disembodied voice produced by DJ Supernova.

The cast is jammin and off the chain, the directors and writers GQ and JQ know their crib and inhabit it body mind and soul.

This rap opera, uses humor; to get the story across and is definitely better than cliffs notes.