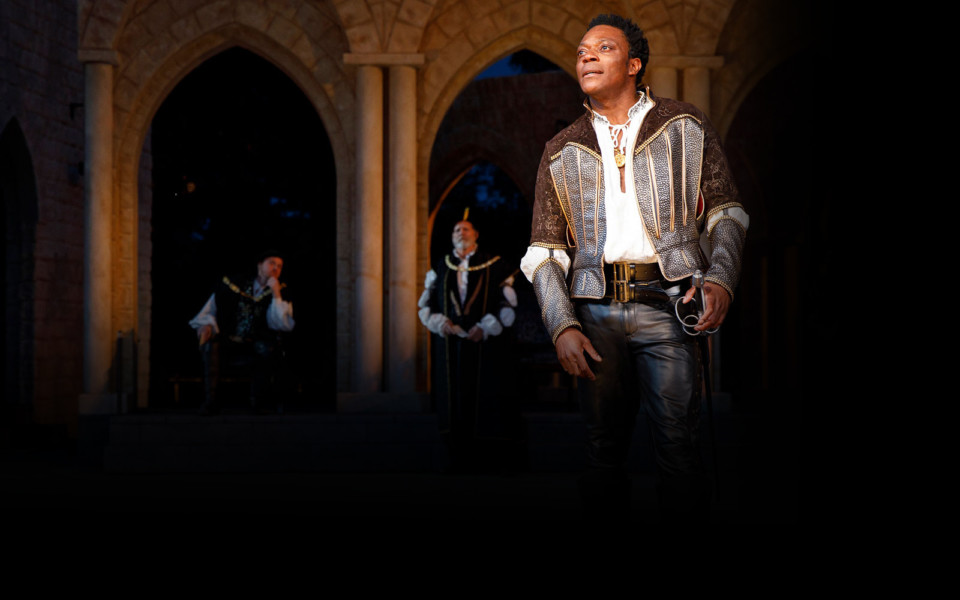 Othello Under The Stars

Othello Under The Stars

“I can’t stand the Moor, but I have to admit that he’s a reliable, loving, and good-natured man.” 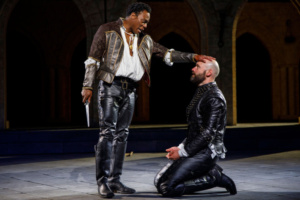 Othello speaks to the of drawbacks and perils of jealousy. First with Iago, who is so consumed with hate that he plots his revenge with a vengeance, then with Othello, who cannot believe the one he loves could love him as much and allows himself to be manipulated to the point of murder. In order for this show to work, you must understand how hatred consumes Iago so that he becomes a master manipulator. Daniel Craig in Othello in the 2016 New York Theatre Workshop production was mesmerizing. Christopher Plumber in the 1982 Broadway production was magnificent.

In this production, Iago is portrayed by Corey Stoll as a resentful, middle-aged man who cannot believe his foreign boss has passed him over for a younger, inexperienced Cassio (Babak Tafti) who is also foreign. In the text, Iago is supposed to be 28. “I have looked upon the world for four times seven years”. To justify his action, Iago believes Cassio and Othello have both slept with his wife, which is also unbelievable in this production since Cassio is so young and Emilia (Alison Wright) doesn’t seem to be his, or Othello’s, type. She is too worldly, so you don’t really understand how she has loved and trusted Iago for so long. 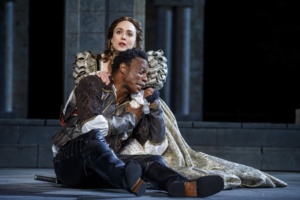 Also because of the age difference between Othello (Chukwudi Iwuji) and Desdemona (Heather Lind), coupled with his foreign birthright, Othello is insecure. Mr. Iwuji struts with the swagger of a young rock star in tight leather pants of the day and boots, with an open white shirt. Once that confidence is knocked down a peg, Mr. Iwuji’s Othello never seems to recover, and never seems to grow with madness. When he goes to kill Desdemona, he gives her a body squeeze then smothers her with a pillow. Highly odd choice. However, Ms. Lind’s Desdemona has an intelligence and radiance to her. She is childlike and sexual, and we understand her love and lust for this easily deceived Moor. 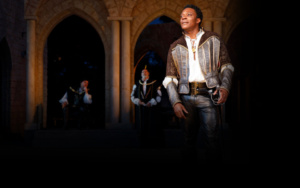 Under the direction of Ruben Santiago-Hudson, there seems to be a cutting off of some of Othello’sthemes. Cassio, the Duke of Venice (Peter Jay Fernandez), Cassio’s mistress Bianca (Flor De Liz Perez) which is always portrayed this way, and Roderigo (Motell Foster) the man in love with Desdemona, take away from the fact that Othello is supposed to be the only foreigner there, thus part of the reason for his insecurity. The theme of racism has been for the most part been erased, and thus in a sense a pivotal part of the plot.

The time frame from marriage to death is no more than 48 hours, so it is rather odd that Iago was able to pull off this scheme in such short time. Othello’s self-destructive behavior had to be as bad as Iago’s. Different men, but two spectrums of jealous insecurities. This production points out those flaws.

The show is beautiful to look at with the period costumes by Toni-Leslie James and the golden arches by Jessica Paz. There are duels, stabbing, and a number of deaths and Shakespeare lives on under the stars.

Othello: Delacorte Theater in Central Park under the stars until June 24th.

Suzanna BowlingJune 23, 2022
Read More
Scroll for more
Tap
He Says: To Swim or Not To Swim Out to Dan Cody’s Yacht
Tony Winners and Broadway Insiders Unite To Build Open Jar Studios