Our Friends The Enemy: The 1914 Christmas Truce

Our Friends The Enemy: The 1914 Christmas Truce 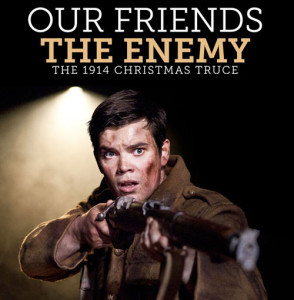 Last year at the New Ohio Theatre, Ricardo Pérez Gonzalez’s In Fields Where They Lay captured the spirit and the soul of Christmas for me. This year we have Our Friends The Enemy: The 1914 Christmas Truce written and performed by Alex Gwyther, directed by Tom O’Brien on Theatre Row.

When I saw In Fields Where They Lay, I did not know the true story of the Christmas Eve truce of 1914 that broke out between the British and the German troops. Mr. Gonzalez’s play not only immortalizes that moment but also shows us a period of history where humanity won over war. In Fields Where They Lay commemorated the 100th year anniversary of this remarkable Christmas Truce.

Set in a British trench on the Western Front during World War I, Gwyther plays James Boyce, a young Brit. From there he becomes his best friend, the German’s who they call a truce with and lets us see inside their world. We learn of the tortures of daily life and how the world was changed forever.

Alex Gwyther, is a wonderful actor and writer and makes us know each of these characters. His performance is worth watching and if you do not know this amazing piece of history it will lighten your heart this holiday season.