Out of Water: A Brazilian Pocket Musical Comes to NYC 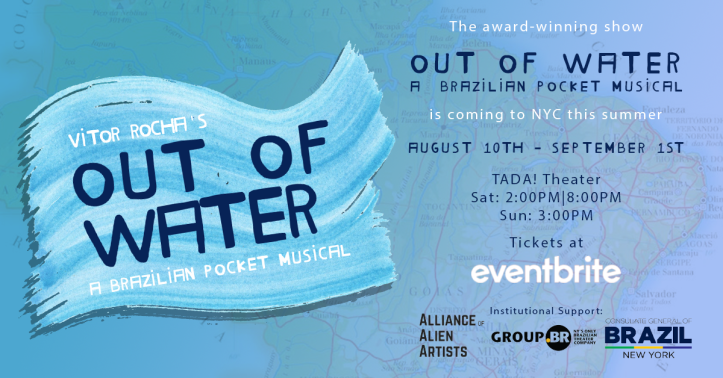 Out of Water: A Brazilian Pocket Musical Comes to NYC

The Interview: Dutra Dives in to Out of Water: A Brazilian Pocket Musical

The award-winning Brazilian musical Out of Water is coming to New York City following a critically acclaimed run in Brazil in 2018.  Hailed as “A gem yet to be discovered” by Estadão Newspaper, Out of Water: A Brazilian Pocket Musical (meaning it runs 80 minutes with no intermission) will play 11-shows only between August 10 and September 1 at TADA! Theater (12 W. 28th Street).

Set in a very small city in the middle of nowhere in Brazil, Out of Water tells the tale of Kid (to be played by Eduardo Medaets), a young boy who no longer remembers his own name, and his new friend, Mr. Out of Water, as they embark on a journey to find the sea.  Along the way, the two friends stumble upon various traditional Brazilian characters who guide them to overcome the biggest fears known to man, giving new meaning to their lives and their journey.

Out of Water features an all-Brazilian cast and creative team.  Joining Medaets in the company are Pedro Coppeti, Helora Danna and Maite Zakia.  Out of Water will be directed by Renata Soares and Ronny Dutra with music direction by Ana Paula Villar, and set design by Juliana Suaide.  Out of Water was translated by Isa Bustamanti and adapted for the NY stage by Soares and Dutra.

Frontmezzjunkies had a little chat with Ronny Dutra about Out of Water and his co-direction and adaptation of the show for the NY Stage.Ross: Tell me, Ronny, how you came to be involved with this show, and what intrigued you about Out of Water?–Dutra: It all started when Renata Soares, a very good friend of mine, asked me if I would be interested in co-directing a show with her. I was honored and excited, but told her I’d have to look into the show first so we could discuss our thoughts about it. The story was so compelling and universal and so well presented to the audience through a Brazilian perspective that I felt a strong connection with the show and we started working together immediately.

Ross: What was your first exposure to this piece?

Dutra: It was back in February 2019 when I was invited to co-direct the show. I did my research , read the script, watched a video of the show, spoke with the creators in Brazil, had a wonderful meeting with my partner Renata Soares and our producer Eduardo Medaets, and we decided we’d make the dream come true!

Ross: Tell me a bit about what it is like to bring all these “traditional Brazilian characters” to the NYC stage?

Dutra: Brazil is a big country, the 5th biggest in size and population. There’s way more than just Carnival, Samba, Soccer, Pretty Tanned People and Forest.  Our culture is very rich and with influences of many different cultural aspects from around the globe,. We’re a big melting pot of diversity., and with “Out of Water“, we found a way of showcasing those “non-cliche” Brazilian characters and present them on stage in a way that the audience can relate, and that goes beyond what most people think as traditionally being Brazilian.

Ross: What do you want the audience to get from this show?

Dutra: We’ve been having great feedback from the audiences we’ve had so far. I like to say that our show is the story of something that anyone can relate to wrapped-up in Brazilian culture. So there’s something for everyone. If you’re familiar with Brazilian culture, you’ll feel at home . If you’re not, you’ll related with the story and be welcomed by the ‘Brazility’ of the show.

Dutra: I think one of the biggest challenges we’ve had was to not leave any cultural loose ends in the story. Anyone can related with the theme of FEAR, the journey of the FEAR through a boy’s eyes and there were so so so many cultural references in the original script that were so wonderfully fitting to a Brazilian audience that you didn’t even need to explain anything because the audience was Brazilian and they’d fill in all the gaps themselves, and they LOVED it. Which is a beautiful thing when you’re performing a Brazilian show in Brazil. The challenge then was to not only translate the script but to adapt the journey of the FEAR to an American audience in a way that still gives you a big taste of our Brazilian culture without making you feel like you need to be born and raised in Brazil to truly understand the show.

Dutra: NYC theater scene is currently craving culture and diversity, so to have the opportunity to contribute with that in our current cultural scenario, is certainly very rewarding . To see the audience’s reactions during and after the show and to hear how touched they were by the story, how warm and welcoming our culture is, and how much they were able to relate with all of it, that’s truly rewarding as a director. I’ve been living in NYC for 7 and half years now and Renata for 4 or 5, so we have a very good sense of what to give and how to give, but you only really know it worked when you see the smile on their faces and the tears in their eyes.

Out of Water will have a limited engagement of 11-shows, beginning Saturday August 10 at 8pm and continuing Saturdays (2pm and 8pm) and Sundays (3pm) through September 1 at TADA! Theater (15 West 28th Street).  Tickets, priced $25-30, are available online at https://OutOfWaterMusical.eventbrite.com