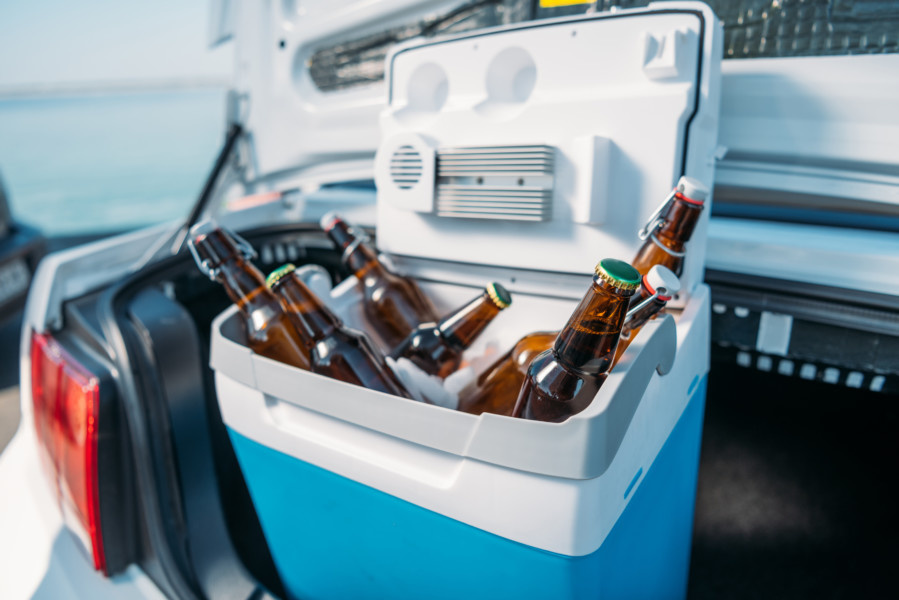 An outdoor cooler can be a necessity when you’re hiking, as there are no other ways to keep food and water cold while on your trip. However, there is quite a wide choice of an outdoor cooler that is available, with modern technology having revamped their design. This has led to a few notable types that have become available in the past few years that many hikers and campers may want to take advantage of. While the choice is something that can vary based on personal preference, there are a few that many people may want to consider.

Alongside this, each of the coolers helps highlight how modern outdoor technology has helped to revamp traditional coolers in a variety of ways. Traditionally, the coolers were simply bags or boxes that didn’t leave the heat in too quickly. While this is still the core concept for the coolers, they’ve changed quite significantly over the past several decades. Not only has this resulted in various types of the coolers being made available, but that they also offer much better cooling that lasts for significantly longer.

This advanced cooling technology should be seen regardless of which outdoor cooler someone purchases. For hiking or camping, however, the revamps have been seen in various ways, leading to a few specific types being released.

As you would expect, a backpack cooler is an outdoor cooler that has been designed to be transported. This makes it one of the more recommended options for hikers and campers, although it could take up some more space than many people may want.Despite this, backpack coolers have been designed to be as portable as possible while still offering quite a significant amount of cooling. Much of the technological improvement that’s been seen here comes in the form of the materials and interior design of the product itself.

While the exterior of the product is almost identical to a typical backpack, the insulation and other features that it includes is quite significant. The similarities can also be seen with some of the materials that are used in a traditional backpack, with much of this helping to keep it somewhat waterproof. However, it’s the inclusion of various special materials to add the cooling quality of the outdoor cooler that has been revamped and improved upon in recent years. Despite the addition of extra material, there isn’t any excess weight, which is one of the more impressive advancements with the niche.

While almost every outdoor cooler has a certain amount of portability, this is something that’s lacking significantly for many. This is primarily because they’re typically large and bulky, making them quite difficult to carry over large distances. However, there have been a variety of technological advancements that have made this much easier in a few areas. One of the most notable of these is the creation of portable cooler bags, which has a few unique benefits.

The innovation that’s also been made with this type of outdoor cooler is that it also saves much more space than many other models. As a result, it can be something that provides a significant amount of benefits for many campers. While the portability aspect is the largest benefit that the majority of hikers and campers will see, it’s also much easier to pack than many others. This is primarily seen in the type of design that these coolers tend to offer more space than many others.

The extra space is also the product of technological advancements, as the cooling aspects of the outdoor cooler are much smaller than previous editions. Despite this, the cooling technology offers as much cooling, if not more, than many coolers campers may have seen in the past.

Soft-sided coolers are somewhat similar to backpack coolers, although there are a few notable differences between the two. One of the most notable is seen in the overall design of the products, with soft-sided coolers hanging at a person’s side rather than down their back.The various technological advancements in the outdoor sector have had quite a few effects on the design of this. One of the more notable of these is that, despite being soft, the sides of the outdoor cooler is much more durable than people might believe.

This has also made the coolers much more lightweight than the majority of other products. Alongside this is the fact that owners should be able to pack many more food items into the bag with much less effort. The cooling technology with these bags has also seen quite a significant amount of advancements. While it shouldn’t keep food and drinks frozen, it should keep them cold and fresh for several days, which is what the majority of hikers and campers would want.

Floating coolers are perhaps one of the more surprising types of outdoor cooler that have been unveiled in recent years. This is something that has benefitted from quite a large number of benefits from a few areas. Naturally, technology and products to keep the outdoor cooler floating are the most obvious of these. However, there are a few other technological advancements that have helped in this regard.

One of the most notable of these is that there has been a significant amount of water-resistance. While the majority of outdoor coolers would have this in various degrees, which makes this one of the more important areas for many people. As such, this is something that floating coolers have in spades, which can be beneficial for people camping at lakes or even on a boat. This could be something that a considerable amount of people will want to take advantage of.

One of the largest problems that many travelers and hikers have with coolers is that they can take up a large amount of space when they’re not being used. This is something that could prove to be quite an issue for hikers and campers, who often have a limited amount of space. However, collapsible coolers have been able to help solve this problem, especially when it making your way back from a trip. These have been designed to fold and unfold whenever needed while still offering the same amount of cooling as any other outdoor cooler.

This is primarily because collapsible coolers are made with special materials that allow it to collapse and unfold without breaking. Alongside this is a unique design that ensures that the cooler doesn’t take up much space when traveling or storing it. For hikers and campers, this could be quite a notable benefit, as it should be able to fold up and fit into a backpack with ease. With relatively recent technological developments, these have also become incredibly lightweight, making the coolers much easier to carry.

When choosing an outdoor cooler, it’s vital to know what your needs will be when you’re hiking or camping. By doing so, you’ll be able to ensure that your choice the right one for you, with much of this focusing on the areas where technology has most had an impact. For example, if you plan on hiking quite a large distance, then you might want to consider the backpack coolers or portable coolers. Floating coolers, collapsible coolers, and others will each have their uses for various things.

These wouldn’t have been possible without the many technological developments that have occurred with outdoor technology in the past several years. While much of this is seen in how it keeps contents cold, it can also be seen in how easy to use, and portable an outdoor cooler is.

WriterJanuary 27, 2023
Read More
Scroll for more
Tap
The 6 Best Ceiling Speakers of 2019
How to Make the Best Choice When Buying Your First Car