Own a Piece Of Hannah Montana 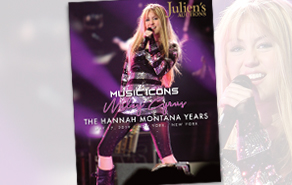 Own a Piece Of Hannah Montana

In celebration of the thirteenth anniversary of the television phenomenon “Hannah Montana,” Julien’s Auctions, the world record-breaking auction house, has announced that Music Icons: The Hannah Montana Collections will headline their rock and roll auction event of the year taking place on Saturday, May 18, 2019 live at Hard Rock Cafe New York and online at juliensauctions.com.

The auction will feature costumes, props, concert tour ephemera, memorabilia and more used from the 2006-2008 seasons of the hit television series “Hannah Montana,” starring Miley Cyrus. The collection comes from Jason Gluck, who ran the MileyWorld fan club during the show’s production. It was also announced today that all proceeds of this auction will benefit Wilder Minds Inc., an international not-for-profit organization chosen by Gluck that strives to make a better place for all of earth’s inhabitants and aids the world’s at risk animals through youth education, art and entertainment initiatives and programs.

“Hannah Montana,” (Disney Channel, 2006-2011) followed the adventures of Miley Stewart, played by Miley Cyrus, a young California teenager who lived a secret double life as pop star Hannah Montana. The show became a worldwide sensation and one of the top-rated kids shows of all time, launching Cyrus’ career as a teen pop singer and a mega franchise that included merchandise, films, albums, concert tours and more. The 2006 “Hannah Montana” soundtrack, debuted at No. 1 on the U.S. Billboard chart (a first for a TV soundtrack) and went double-platinum and in the following year, Cyrus’ two disc set, “Hannah Montana 2/Meet Miley Cyrus,” became her second No. 1 album on Billboard. She starred in the commercial hit film based on the series, Hannah Montana: The Movie (Walt Disney Studios Motion Pictures, 2009) that earned $169 million in worldwide box office revenue.

Highlights of the auction include items from Miley Cyrus’ “Best of Both Worlds” tour – her debut concert tour – such as an ensemble consisting of a customized black satin jacket monogrammed “Miley” in the front and “M” on the back, a shocking pink tank top and rose/white striped knee high socks (estimate: $3,000-$5,000); her customized high top “Best of Both Worlds” Converse sneakers (estimate: $2,000-$4,000) and a large globe shaped inflatable that reads “Miley” used on the tour (estimates: $300-$500); costumes and ensembles Cyrus worn on Hannah Montana (various estimates: $400-$1,200) many of which include the original wardrobe tags and test shots of Cyrus wearing the costumes, ncluding an army green floral print top with dolman sleeves and a pair of pale yellow jeans worn on season 2, a pair of mint green Cleo stretch jeans, a floral print crepon top with deep red halter strap, a Love on a Hangar shocking pink terry cloth mini dress, a black bustier embellished with painted flowers and faceted glass, a turquoise sweatshirt with floral embroidery and a signed in marker “Miley Cyrus” American Apparel grey zip front jacket with H2M applied to the front and Crew 2007 in the back, “The Ultimate Miley Party” varsity black jacket (photo top left); a stratocaster style electric guitar with three single coil pickups and colorful Six Flags logo (estimate: $500-$700); a coral tank top that reads “Let’s Rock and Roll” worn by Cyrus back stage at Miley Cyrus Live at MGM Grand Las Vegas in 2007 (estimate: $300-$500) (photo above right); a black and white floral print boot signed in silver marker “These boots are made for Rockin’ xoxo Miley” (estimate: $300-$500) (photo left); various personal handwritten notes including one written by Cyrus on the subject of acquiring a driver’s license (estimate: $400-$600), jewelry, backstage passes, T-shirts and more.

“Julien’s Auctions is celebrating the thirteenth anniversary of ‘Hannah Montana’ in a big way with this special event,” said Martin Nolan, Executive Director of Julien’s Auctions. “We’re thrilled to offer this exclusive and exceptional collection of items owned and worn by Miley Cyrus as her most famous and iconic television persona that launched her career as one of the most influential and exciting pop divas today.”