Own Pieces of Broadway and the Set from Avenue Q 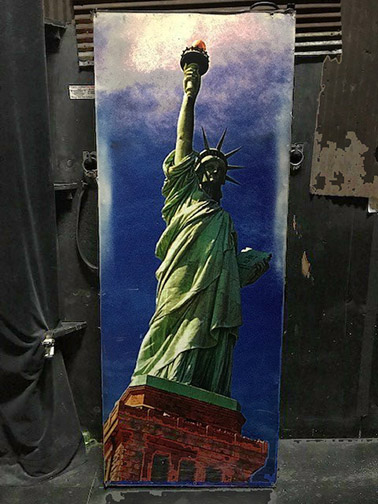 Own Pieces of Broadway and the Set from Avenue Q

Theater fans and collectors can have their very own bit of Broadway when set pieces and props from the Tony Award-winning musical Avenue Q will be made available for an online auction on the Broadway Design Exchange website from May 6 to 16. The auction coincides with the May 26 closing of Avenue Q, which has played 16 years on Broadway and Off-Broadway, as well as in theaters around the world.

Among the memorabilia for sale from Avenue Q — an uproarious musical about a group of 20-somethings (both humans and puppets) who live together on a rundown street in NYC as they navigate adulthood– are some of the most unforgettable items from the set:  Kate Monster’s apartment furnishings, items from Princeton’s bachelor pad, Rod and Nicky’s apartment furnishings, Gary Coleman’s barbecue grill, a large replica of the Empire State Building, the set’s windows and doors, the chuppah under which Christmas Eve and Brian are married, the Monsterssori School Sign – even the hospital bed in which Lucy comes back to life!

“This effort to salvage pieces of a beloved show represents the mission of Broadway Design Exchange and the reason why I founded the website” says Anna Louizos, its founder.

According to Ms. Louizos, “I have seen too many set pieces and props fill dumpsters at the closing of many shows, it’s not only wasteful and environmentally irresponsible, but deprives theater fans of the opportunity to collect pieces of Broadway history.”

Avenue Q has music and lyrics by Robert Lopez and Jeff Marx, book by Jeff Whitty, and is directed by Jason Moore. Based on an original concept by Robert Lopez and Jeff Marx, with puppets conceived and designed by Rick Lyon, musical supervision by Stephen Oremus, choreography by Ken Roberson, scenic design by Anna Louizos, costume design by Mirena Rada, lighting design by Howell Binkley, and sound design by Acme Sound Partners. Music director is Brian Hertz. Animation design is by Robert Lopez, incidental music is by Gary Adler, and casting is by Cindy Tolan & Adam Caldwell. Christine M. Daly is Production Stage Manager.

At New World Stages, Avenue Q performs Mondays, Wednesdays, Thursdays and Fridays at 8:00 pm, Saturdays at 2:30 pm and 8:00 pm, and Sundays at 3:00 pm and 7:30 pm. Tickets can be purchased through Telecharge by calling 212-239-6200 or visiting www.telecharge.com. A limited number of rush tickets are available at the box office for each performance.