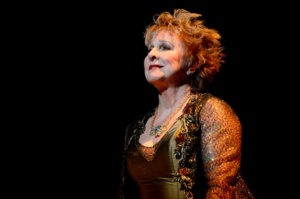 Pamela Myers, made her Broadway debut as Marta in Stephen Sondheim’s musical Company. She introduced the number, “Another Hundred People,” and was nominated for the 1971 Tony awards for Best Performance by a Featured Actress in a Musical. In 1975, she appeared in the Snoopy! The Musical. On TV she was a regular on the Sha Na Na show and guest stared on several shows including Alice. She appeared on the Broadway revival of Into the Woods and the national tour of White Christmas, Gypsy, Sweeney Todd and many POPS concerts. She also performed at the White House with Marvin Hamlisch and Jerry Herman. This holiday season she will be appearing in Kris Kringle The Musical, with Cathy Rigby (Peter Pan, Seussical) Friday, November 24 at 3PM and 8PM, at The Town Hall (123 W. 43rd Street, NYC).

T2C had a chance to catch up with Pamela.

T2C: Who do you play in Kringle?

Pamela Myers: I play Grandma Kris. I had meet Pierre who is the director and Charles the music director in Cleveland. I had given a master class at Baldwin Wallace Pierre was a graduate of the program. I had also taught a theatre class in cabaret singing and Charles had played for me. Last year, they called me up to do the reading. I was the narrator and Grandma and it was too much. Now Cathy is the narrator. We did the Wizard of Oz together in the 80’s. I was the Wicked Witch and Cathy was Dorothy. It is nice to work together again.

T2C: Company was your first Broadway show. Had you done other theatre in New York prior to this?

Pamela Myers: I had only worked in a review. It was the last review at Upstairs at the Downstairs. I had done summer stock and gotten my Equity card in Brunswick Maine. I had gotten an audition and a agent my senior year of college. Lehman Engle saw my recital and sent me to Gus Schirmer. I auditioned at his house and was sent on the Maine audition the same day. I also saw my first Broadway shows then, which were Merman in Annie Get Your Gun and Mame. 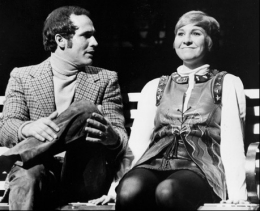 T2C: What was it like to be given the song “Another Hundred People”? Did you know then it would become a classic theatre song?

Pamela Myers: I sang “God Didn’t Make Little Green Apples” and “Shy”, at the callback Sondheim told me “I wrote you a song”. My part was almost written for me.

Originally the song was a 4th higher and had no ending. I was so scared and so naïve. I didn’t realize at first. they would put the song in my key. Then in Boston they took the song out. Hal came to me, then Stephen, then Jonathan Tunick, telling me the song would be put back in. I think the song was out 1 or 2 days. Originally Company had three different endings. I actually have the original script. 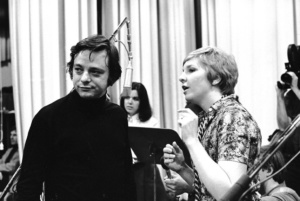 T2C: What was it like working with Stephen Sondheim?

Pamela Myers: It was very intense, because he’s meticulous. Complementary when he liked it. He would correct me when I got the notes wrong. He was kind of intimidating, but I appreciated it. I credit him for the longevity of my career for the impact of “Another Hundred People.”

T2C: What was it like working with Hal Prince?

Pamela Myers: Great, Hal is a positive guy. He was pretty patient with me. Hal is also precise. Company got mixed reviews and he still stayed positive.

T2C: In Snoopy! The Musical you originated the song “Poor Sweet Baby”, can you tell us about that experience?

Pamela Myers: Unique. I was living in LA and they wanted to do the show in San Francisco. We rehersed and did it at The Little Fox. Francis Ford Coppola owned it. The show was built against sketches and had some really well-written scenes. We recorded the album thier. I ended up not doing it on Broadway because I was in conflict and doing another show called Perfectly Frank, which I also didn’t do in New York, because I was getting married. 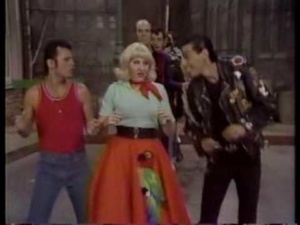 Pamela in She Na na

Pamela Myers: A fluke! I was living in LA right after Snoopy. I got a call because Leland Palmer had not worked out. They asked if I could come over that day. I was hired as a sketch comedy person but the writers were Bruce Vilach and Joel Silver and they were big Sondheim fans, so I did end up singing. I was also cast in the pilot of Facts of Life, but I was let go.

T2C: You worked on “Alice,” with Company alumni Beth Howland. Did you get to perform together?

Pamela Myers: I did four Alice’s as Beth and I were best friends. We didn’t get to sing together but I did get a really funny version of “The Man I Love” sung to Mel.

I also did Happy Days with George Furth. He did a lot of acting back then.

T2C: You performed at the White House with Marvin Hamlisch and Jerry Herman.

Pamela Myers: Yes, I remember just wandering around the White House. Jerry Orbach, Larry Kert, Peal Bailey and Judy Kuhn were also in it. My shoe broke right before the show and thank-god I had an extra. I sang “Another Hundred People” and a solo of “You Can Drive Person Crazy” and a duet with Larry.

T2C: What are your favorite roles?

Sweeney Todd. I did three different productions. Also Mama Rose in Gypsy. I also did Annie Get Your Gun, I live in Ohio and I got to meet Annie’s grand niece. Her great grandfather was Little Joe from the show. Knowing the real story about Annie and Frank and how he gave up his career for him was thrilling

Pamela Myers: I’m from Ohio. I ended up having to deal with family stuff.

Pamela Myers: When I got into musical theatre there was no degree. My teacher Helen Laird at the Cincinnati Conservatory of Music used me as the guinea pig for it and I received the first Musical Theatre degree in the country. And I love being a grandma. I have two grandsons. I would love rights for people everywhere. I have a lot of friends who are not progressive and I am able to relate to everybody. That’s why I am able to live in a place like this. I am frustrated for my friends who have to worry about their civil rights. I am still active in the arts and always will be.

Suzanna BowlingJuly 8, 2020
Read More
Scroll for more
Tap
Jesus Hopped The ‘A’ Train: Must See Theatre
A Night with the Dead: In Need of Some Life