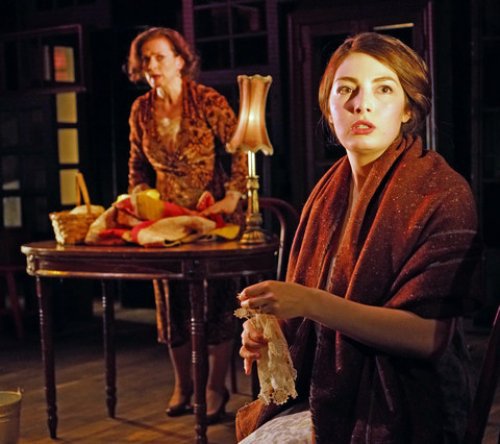 I am so sorry I saw Joyce van Dyke’s haunting new play Daybreak at its last performance. This intricate portrayal of the 1915 Armenian massacre during World War I, where leaders of the Turkish government set in motion a plan to expel and execute the Armenian population, was heartbreaking. By the early 1920s, the massacres and deportations finally ended and between 600,000 and 1.5 million Armenians were dead. Many more were forcibly removed from the country; in Daybreak the hatred and torment spans generations. 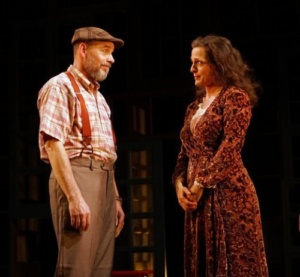 Starting off with an Armenian folk dance, characters from the past morph into the present. In the attic of a house in Providence, Rhode Island, the time is now 1938. Victoria (Nicole Ansari) is sewing a quilt, but her mind wanders to the past. Her husband, Harry (Michael Irvin Pollard), wants his dinner and their teenage daughter, Rose (Tamara Sevunts), has gone out for the night. Victoria is haunted by Varter (Ms. Sevunts) and a child is in question. Both Victoria and Harry survived the Armenia massacre and are still stuck in their past trauma’s. Victoria acts in an Armenian theater group as therapy and to escape. 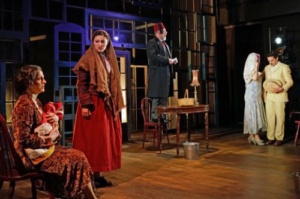 Flash forward to 1982, Victoria and Harry now live in Southern California and Victoria is being interviewed by a young woman for a university’s oral history project. Harry wants her to stay silent, but she can’t. As time shifts, dreams turn into reality and the past, which should not be forgotten, gets a rather complicated healing. 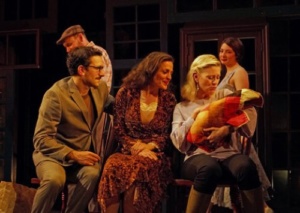 Kudos to the Pan Asian Repertory Theatre for stepping outside their boundaries and casting the remarkable Nicole Ansari, whose layered performance takes us on this fascinating journey. Ansari portrays Victoria from teens to old age, brilliantly allowing us into her character’s despair, humor, and strength. Ms. Sevunts’ is ethereal. Mr. Pollard showed us the fear that follows trauma. Robert Najarian, Angela Pierce, and Melis Aker all bring a coherence to their roles and each has a winning moment in the piece.

Director Lucie Tiberghein mines the play’s pathos, comedy, and mystery with her dazzling staging that fills the space with arresting imagery. Through grand movement, fluid transitions between the various dimensions, and obtaining intense performances, Ms. Tiberghein creates an enthralling presentation.

Victoria is based on Van Dyke’s grandmother and she brings a complete, non-linear approach to her work. Though I think the play needs some trimming and some more structure, this piece needs a longer life. When you find out that the title is a child’s name, and the shawl is the remembrance of the child Victoria lost, you become drawn into this work.

I wish for this play a longer life and pray that this kind of senseless brutality is talked about more, so it is never repeated.