Paul Slade Smith’s East Coast premiere of The Outsider, opened last night at at Paper Mill Playhouse. This play is topical, relevant and an audience pleaser. This satirical production thrusts Ned Newley (Lenny Wolfe), a reluctant, hardworking and socially shy Lieutenant Governor into the Governorship, when the Governor is forced to resign due to a scandal of a sexual nature. His Chief of Staff and only staff Dave Riley (Manoel Felciano) has hired a temp, Louise Peakes (Erin Noel-Grennan), a dumber than dumb office receptionist. Newley who has a fear of public speaking, has caught the eye of two sharp political consultants, Paige Caldwell (Julia Duffy) and Arthur Vance (Burke Moses), who see this as an opportunity to groom this candidate into the puppet they want. A public relations attempt goes array when reporter, Rachel Parsons (Kelley Curran) and her cameraman, A.C. (Mike Houston) arrive for a tapping of a live television interview. Ms. Peakes, hijacks the interview, showing that stupidity sells if done sincerely. 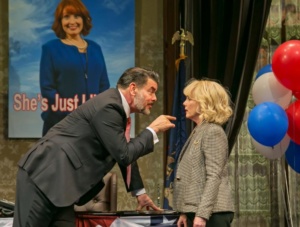 The cast is all at the top of their game and play their roles to the hilt. l especially liked the scene between Newley and A.C., which seemed the most relevant of the whole piece. Also the scene where Newley expresses, “what is government.” From the audiences response, they mastered the humor, but I found this so implausible, due to the character of Louise or Lulu. Playing her role like Sarah Palin, Lulu is an imbecile. If she had in the end shown just some kind of manipulative strategy or something behind that mindless chatter that became beyond annoying, the show would have had me. It would have shown depth. 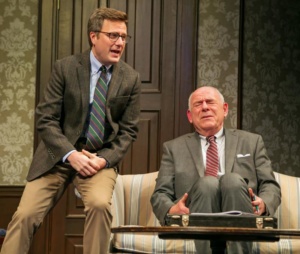 I don’t find what is happening politically funny. Though this show is not about Trump, or if you are a Democrat or a Republican, it is about political numbness and the manipulation of candidates for the sake of ????? Ned’s integrity is almost over run by the movers and shakers, who cast likability against effectiveness. It is all about those polling numbers. 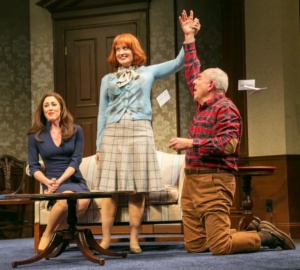 Director David Esbjornson, needs to speed up the beginning or cut the repetitiveness of how Ned is gun shy about speaking, but keeps the show at a clip after those scenes. The show runs like a well oiled machine and as I said the audience was enjoying themselves immensely. 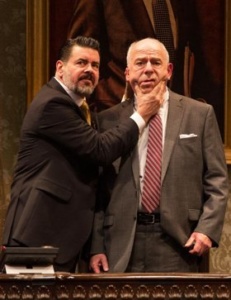 The set by Michael Schweikardt; costume design by Elizabeth Hope Clancy; lighting design by Ben Stanton; hair and wig design by Charles G. LaPointe; and sound design by Randy Hansen are all well done and captured the spirit of America.

It would not surprise me to see The Outsider picked up and moved to Broadway. Maybe it is good to not take this climate so seriously. Maybe this show will open back up the dialogues between friends and family members, who are estranged for differences of opinions.  Maybe I am being to optimistic, but one can hope.