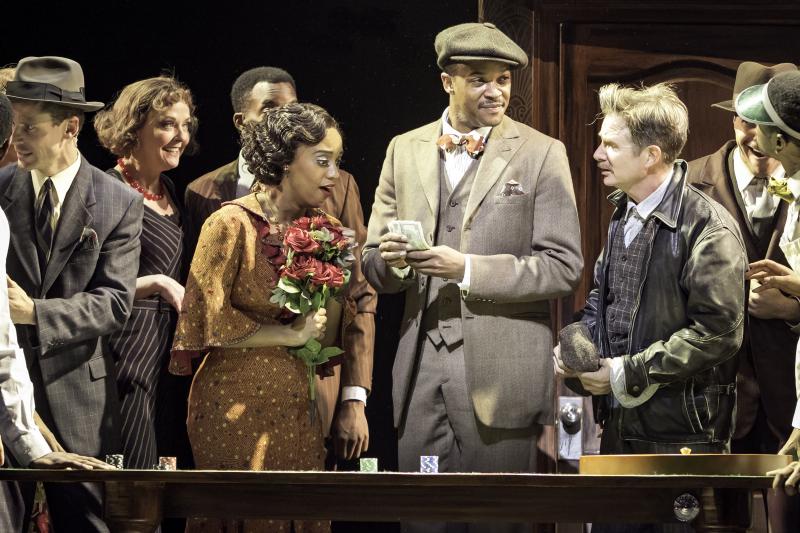 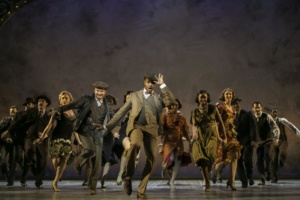 Photo by Jerry Dalia; Center: J. Harrison Ghee(Johnny Hooker) and the company of The Sting.

I can see The Sting – loosely based on the 1973 Oscar winner for Best Picture starring Paul Newman and Robert Redford – now playing at the Paper Mill Playhouse in Millburn, N.J. coming to Broadway, winning audience approval, and easily taking home some Tony gold. This world-premiere musical, deftly directed by John Rando, has elements of an old fashion musical but with twists and turns to keep you on your toes.

The impressive tap choreography has that wow factor and it is some of Tony-winner Warren Carlyle’s best work. It is show-stopping. 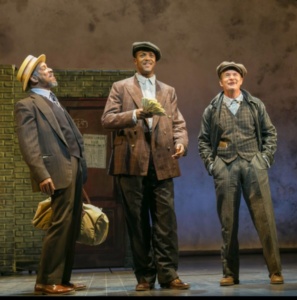 The Sting will make a star out of J. Harrison Ghee as Hooker, played by Redford in the film. Making this role his own, Ghee is a triple threat with his glorious tones and lithe dancing style oozing charisma. 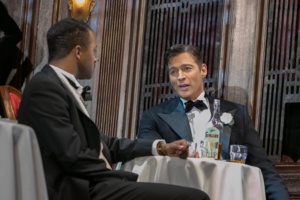 Harry Connick Jr. as Newman’s role, Gondorff, is a pleasant surprise. Not only does he croon in that Frank Sinatra style and tickle the ivories, but Carlyle has turned him into a tap dancing pro. 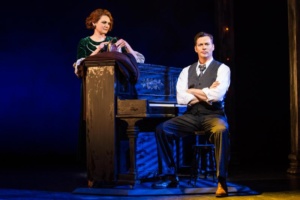 In seeing The Sting, you have to divorce yourself from the movie. Though all the elements are there, this is its own animal. The show incorporates all of the key elements, such as Scott Joplin’s “The Entertainer” and “Rose Leaf Rag,” but the score by Mark Hollmann, Greg Kotis, and Harry Connick, Jr. is tuneful. I especially loved the songs “You Can’t Trust Nobody”, “This Ain’t No Song and Dance”, “Show the Man” and the smoky “Nighttime is Better”. Enhancing this score are the fabulous vocal arrangements by Fred Lassen, dance arrangements by David Chase, and orchestrations by the amazing Doug Besterman. 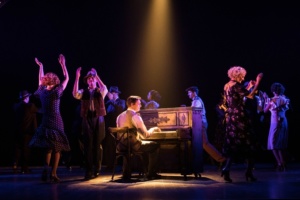 Photo by Evan Zimmerman for MurphyMade;Center:Harry Connick, Jr. (Henry Gondorff) and the company of The Sting

Set in Chicago in the 1930’s, fellow con men Luther (a suave Kevyn Morrow), Kid Twist (a very funny Richard Kline), and Hooker (Ghee) steal from crime boss Doyle Lonnegan (a villainous Tom Hewitt). While Luther is killed, a hit is put out on the other two. Hooker, wanting revenge, turns to a professional con artist, Henry Gondorff (Harry Connick Jr). The two create an elaborate gambling scheme to con Lonnegan into betting away half a million dollars. You will not see some of the deceptiveness until it happens, making this show a delightful surprise. 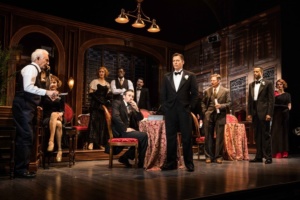 Photo by Evan Zimmerman for MurphyMade;Center:Harry Connick, Jr. (Henry Gondorff) and the company of The Sting

Rounding off the massive array of characters are the vastly talented Kate Shindle as Billie, a hooker involved with the con and Gondorff; Janet Dascal as Loretta, a waitress who is not what she seems; Peter Benson as The Erie Kid, Christopher Gurr as J.J. Singleton, and Robert Wuhl as Snyder, the con men who make up the game. 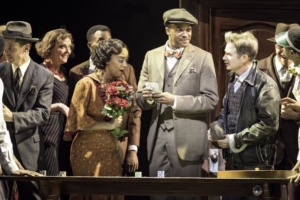 Photo by Jerry Dalia; Center: J. Harrison Ghee(Johnny Hooker) and the company of The Sting

The costumes by Paul Tazewell, along with the hair and wig design by Charles G. LaPointe are flawless. The elaborate set design by Beowulf Boritt is enhanced by the lighting by Japhy Weideman, making this production look expensive and well thought out. 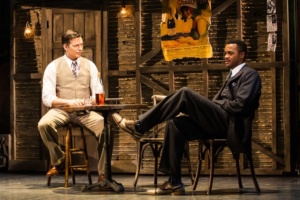 Bob Martin’s book slows in the second act and the female characters need to feel more like people, but Martin’s witty dialogue more than makes up or the easily fixed flaws.

Hurry and get your tickets to The Sting, as it is playing a very limited engagement. Like most pre-Broadway shows, some of the best songs will be buried in a trunk and now is your chance to hear them and see the show before it changes. The Sting is definitely entertaining, and Paper Mill Playhouse is showing more and more that this is the perfect place for a Broadway try-out!