When I saw Irving Berlin’s Holiday Inn on Broadway, it was inconsistent and not well cast. Holiday Inn at Paper Mill Playhouse is a delightful burst of energy, with a delightful cast. This is the perfect gift to bring cheer to you and your family.

Based on the 1942 movie starring Bing Crosby and Fred Astaire. Jim Hardy (Nicholas Rodriguez), Ted Hanover (Jeff Kready), and Lila Dixon (Paige Faure) have a musical act.  Jim prepares to give his last performance as part of the act before marrying Lila and retiring with her to a farm in Connecticut. However, when offered a new, more prestigious gig, Lila opts to be a duo with Ted, saying when it is over, she will return to Jim. Jim finds out the farm is rundown, and he is no good at farming despite his assistant Louise’s (Ann Harada) help. With foreclosure in the future, that is the day Lila dumps him to return to performing.

Things start to look up when Jim meets the talented elementary school teacher, Linda (Hayley Podschun). Hoping to solve matters, Louise calls on all of Jim’s old dance buddies. With their help, Jim decides to turn the farm into an inn on popular holidays, complete with spectacular song and dance.

Jeff returns after Lila dumps him. He ruins the first show but ends up dancing with Linda. Now searching for a new dance partner since Hollywood is after him, he is convinced Linda is the girl for him. Jealousy ensues, miscommunication tears the lovers apart, the inn is made into a movie and a happy ending is had by all.

This musical is filled with classic Irving Berlin’s masterpieces including “Step-in Out With My Baby”, “Blue Skies”, “Heat Wave”, “It’s a Lovely Day Today”, “Happy Holiday”, “Be Careful, It’s My Heart”, “Cheek to Cheek”, “Easter Parade”, and of course “White Christmas”. There are many more lesser-known Irving Berlin tunes that will resonate with you, making this a musical journey that is truly satisfying.

The cast is spectacular. In the Broadway production, only Corbin Bleu as Jeff and Megan Lawrence had any umph. Here, these actors belong on Broadway with their fabulous voices, chemistry, and connection to the era. Ann Harada really knows how to pull off a number and make us laugh. Hayley Podschun has a phenomenal voice, makes us care for her as she longs to be loved, and boy can she dance. Nicholas Rodriguez as Jim channels Bing Crosby on a couple of the songs. His good looks are only surpassed by his chemistry with Ms. Podschun. We believe this budding romance as corn-fed as it is. Jordon Gelber dances up a storm and Paige Faure gives us the ultimate song and dance diva. Jordon Gelber as Danny does a great job in a small role.

Photo by Evan Zimmerman for MurphyMade

The book by Gordon Greenberg and Chad Hodge seems tighter than on Broadway, as does the direction by Mr. Greenberg. Denis Jones was nominated for a Tony Award for his choreography on Broadway and it is easy to see why. 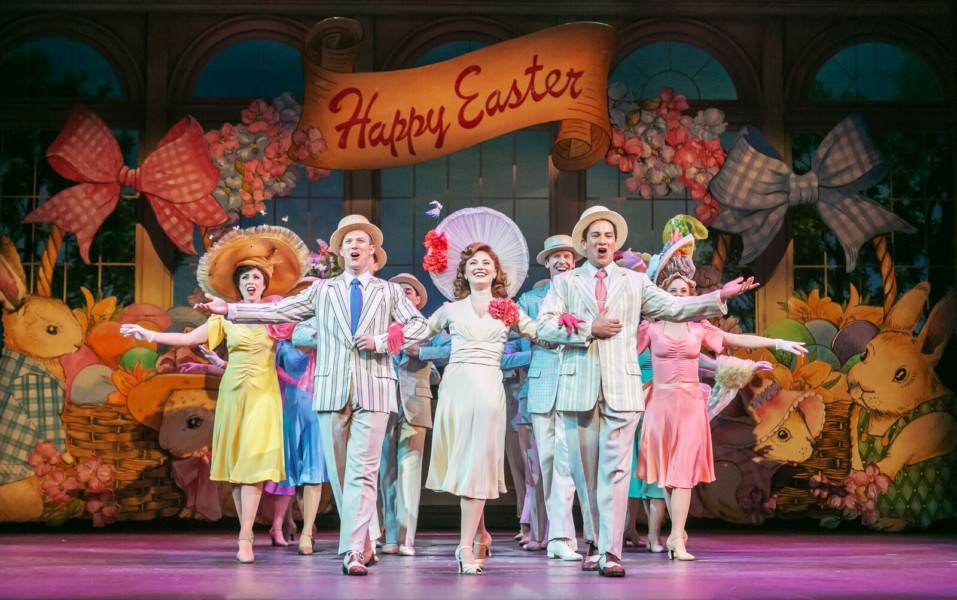 Jeff Kready, Hayley Podschun, Nicholas Rodriguez Photo by Evan Zimmerman for MurphyMadeThe design and musical team from Broadway were back at the Paper Mill Playhouse with scenic designer Anna Louizos, costume design by Alejo Vietti, lighting design by Jeff Croiter and hair/wig design by Charles G. LaPointe, fabulous orchestrations by Larry Blank, Vocal and Dance Arrangements by Sam Davis and Additional Dance and Vocal Arrangements are by Bruce Pomahac. If you got it right the first time… why change?

Irving Berlin’s Holiday Inn will get you in the mood for the holidays and make you remember what good old-fashion musicals can do for the soul. It is worth the trip to New Jersey.