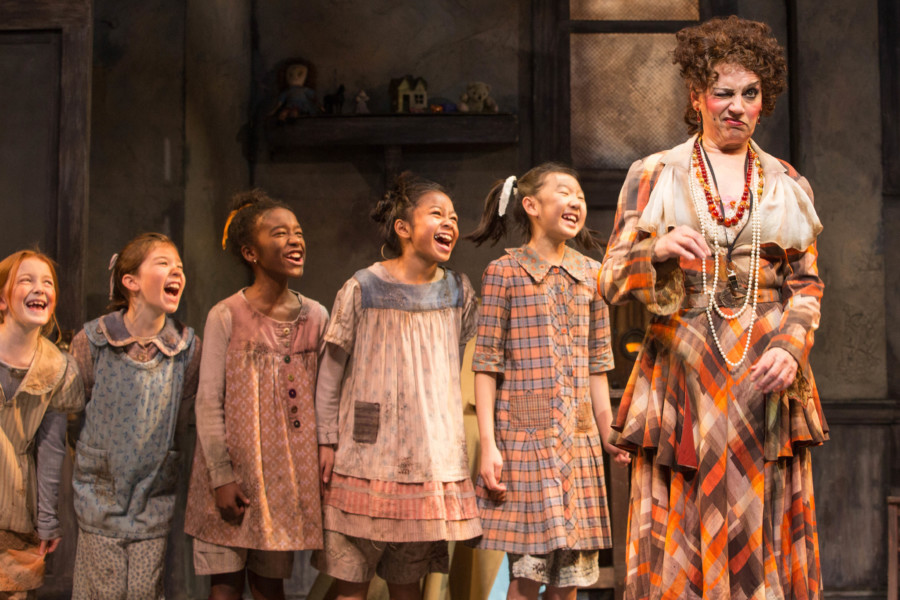 Ross
This is what Annie the Musical, now getting a big old fashioned Broadway revival at Paper Mill Playhouse, is all about. This 1977 musical, based on the popular Harold Gray comic strip, ‘Little Orphan Annie’, with music by Charles Strouse, lyrics by Martin Charnin, and book by Thomas Meehan, was created for all those young kids in the audience looking up at that big stage with glee. Lucky for me, my companion to the theatre was 6 year old Hazel, a fellow theatre junkie who’s is becoming quite the seasoned theatre-goer and assistant critic. To watch her face light up with big eyed dreams as the curtain rises is just the kind of glorious response this showy of shows deserves. Directed with old school dynamics by Mark S. Hoebee (Producing Artistic Director of Paper Mill), something along the lines of maybe how the iconic Mama Rose would direct (“Sing out, Louise”), this Annie will not surprise anyone of a certain age one little bit, but I don’t think us older persons are the intended audience out here in Millburn, NJ. This show is meant for the young Hazels and Stevens in this world, instilling these kids with the sense of wonder and excitement that only live musical theatre can bring. And thank goodness for it.
But as good fun as this is, don’t go looking for any subtlety in this production. This is a straight-forward and well crafted Broadway machine, generated to pack a vocally powerful punch at every moment that can be found. When young actress, Peyton Ella (Cassidy Pry at other performances) first opens her mouth, we know she is channeling an old fashioned Anniefull of audaciousness and big hearted optimism, but it is the moment when Ella (Ahmanson’s Grey Gardens) starts to sing “Maybe“, the first of many of these well known and perfectly crafted classics, that our jaw literally drops with wonder. This girl can belt. No question. Her lung capacity and big voiced charm is spot-on Annie. It is definitely one of the WOW moments within this show, and she never lets it fade through the roster and numerous reprises of “Tomorrow” and “I Think I’m Going To Like It Here“. The only thing missing is a more mature range of emotional quietness that can deepen an actor’s performance. If her director or vocal coach would take the time in the coming years to teach her some more subtle choices with volume and tone, she will have quite the career ahead of her beyond belting it big.

All she needs to do is ask Beth Leavel (The Drowsy Chaperone), who plays Miss Hannigan to her precocious Annie. As one of the best thing in this show, Leavel squeezes out every comedic moment available to her, just as she did in the very typical mother role in Bandstand, and adds her own distinct twist of villain-ness to each and every scene. She can belt it out of the park whenever she wants to, but she also knows how to pull it in when more intimacy is required (although I must admit this part doesn’t ask for much quietness). Her moment of stepping away into her office from Warbucks secretary was Hazel’s favorite moment in the show.  She and I just loved this Miss Hannigan, even if the orphans don’t. Her “Little Girls” is perfection, and she personally pulls “Easy Street” up from the gutter of mediocracy with a snarl and kick. The orchestra, lead by music supervisor and director Jeffrey Saver (Broadway’s Allegiance) sound great and pull us into this feisty song. The other two in that number, Kim Sava (Goodspeed’s Guys and Dolls) as Lily St. Regis and Cooper Grodin (Vancouver Opera’s Evita) as the slimy Rooster do a fine job, but they aren’t directed into anything noticeable. Their number, one of my favorites, is enjoyable as almost all these numbers are, but I guess I was just hoping for something a wee bit more from the director of these orphans and their counter-parts.

Speaking of those “Little Girls“, this team of young professionals; Gabby Beredo, Michelle Henderson, Lauren Sun, Eve Johnson, Sloane Wolfe, and the other best thing in this show, the super-gifted Tessa Noelle Frascogna as orphan #2 Molly, all pull together and give a strong unified performance, easily dispensing the standard choreography by Joann M. Hunter (Broadway’s School of Rock) with charm and efficiency. They are fun and crisp, sounding perfectly unified and harmonic, particularly in the wonderfully festive reprise of “You’re Never Fully Dressed Without a Smile“.
I do miss the larger and greater role of Miss Grace Farrell that was created in the 1982 film for the phenomenally talented Ann Reinking to show off those long dancing legs. It seemed like in the film, they expanded so many numbers (and added one show stopper, “We Got Annie” that doesn’t appear in this production) just for her sake.  In this stage production, her role, played by the ever-so-talented Erin Mackey (Broadway’s In Transit) feels small and a bit disconnected. Without those high kicking dance moves from Arlene Phillips, the film’s choreographer, the numbers “NYC” and “Annie” don’t feel as big and as exciting.  When asking Hazel her preference, the film or the stage musical post performance, she answered, “the film” without a hesitation, and I have to think that it has something to do with that. And I must ask the costume designer, Leon Dobkowski (Irish Rep’s The Weir), couldn’t you give the beautiful Mackey a dress that when Warbucks says “Wow, You look beautiful“, we do the same?
Daddy Warbucks though is a different story.  Played with full throated magistracy by Christopher Sieber (Broadway’s Matilde, Pippin, Shrek), Sieber easily gives us an Oliver Warbucks that causes a sweet lump to form in our throats when he tries to tell his Annie that he wants her to stay with him. Their chemistry is pure and sweet, especially during the adorable “I Don’t Need Anything But You“.  And we believe, most full heartedly that these two orphans are meant for each other. That is where the magic of Annie resides, something I feel that the iconic 1982 film lacked, within the hearts of Annie and Warbucks, and the chemistry of those two leads.
At one point in my life, I was a similar young thing, just like my companion, Hazel and all those other kids that Sunday matinee taking in the magic of Annie. I remember seeing She Loves Me at the Grand Theatre in London, Ontario. I wasn’t lucky enough to be taken at the age of six, but the big eyed response to seeing my first musical was just as profound. I discovered something magical that I would always want to embrace for the rest of my life, and when the snow came down from the ceiling of the Paper Mill Playhouse theater at the end of this wonderfully production of Annie, Hazel beamed with such a big smiled amazement filled with wonder and awe, that it was infectious to me and all the adults around us. She held out her hand trying to catch some flakes that floated down around us, and we all joined her in the glee of what theater can do for a young person’s mind and imagination, reminding us of a time when we too discovered the magic of live theater. She walked out singing songs from Annie, and reminded all around us, that this is what this show is all about. 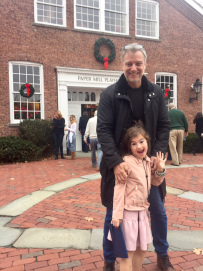