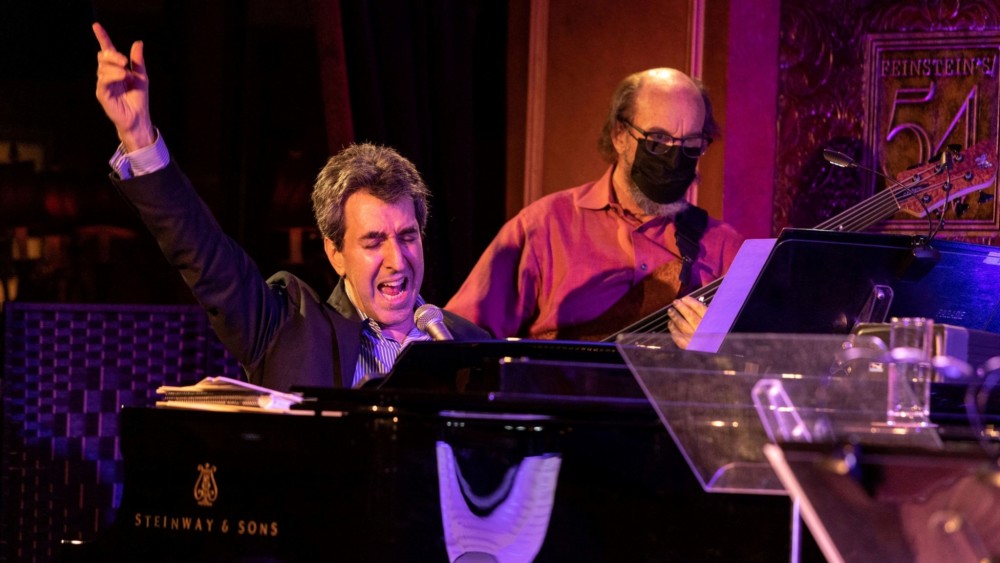 Before you even forget, go right now and get tickets for the Jason Robert Brown concert at Feinstein’s/54 Below. You can even livestream it at 7pm tonight by clicking here. This is a must for musical theatre lovers as Jason debuts not one new song, but five. The maestro is working on four new musicals!

Here is our review from last night, which we carried on today. Brown’s music is so prolific and his personality charming and engaging. Watching Brown you realize he is a showman besides being a genius songwriter, orchestrator, healer, a generous band leader who writes charts, so that each of his phenomenal nine-piece orchestra, which features Gary Sieger, guitar, Randy Landau, bass, Jamie Eblen, drums, Lisette Santiago, percussion, Tony Kadleck, trumpet, Alison Shearer, alto sax, Ben Kono, tenor and bari sax and Clint Sharman, trombone have a solo and a chance to shine.

“Invisable”featured guest Anastasia Talley. The song came about when Jason was asked to write a song for a young girl named Josie, in treatment at the Ronald McDonald House. “Josie’s bones grow incorrectly and very weak,” Brown wrote. Brown went to meet Josie and her mom. Over multiple visits, Brown spoke to Josie, got to know her, and took pages and pages of notes—but was unable to find the song in her story. As he exited Josie’s room after his final visit, Josie’s mother told Brown: “She just wants to make sure she’s not invisible.” That was the inspiration Brown needed to write “Invisible,” a pop-rock anthem on his album How We React and How We Recover, released on Ghostlight Records.

From another new show comes “The Western Wall,” For this song strains of Middle East permeate this haunting drum and flute inspired song. The song also has strains of the 60’s and a melodic structure similar to Jesus Christ Superstar. This song comes from The Connector. Brown will join the faculty of Princeton University for the upcoming fall semester as part of the University’s Atelier guest artist program. Brown will workshop The Connector,  with book writer Jonathan Marc Sherman and director Daisy Prince about an aspiring writer who has his first article published by The Connector, a magazine with a storied history. All three artists will be on hand to develop the piece with students over the course of the semester. The musical will receive a large-scale reading/workshop presentation in association with The McCarter Theatre at the conclusion of the semester. Now this was one of the shows I knew about as one of my favorite songs is “Cassandra” from this show.

From Brown’s How We React and How We Recover the salsa driven “Melinda” ended the set, but of course there was an encore.

The last song of the night was the prolific “All Things In Time,” which I leave you with the lyrics.

All things in time.
If not today, if not tomorrow,
Then all things in time –
We can’t predict
What comes to pass.
All we control is how we react
And how we recover.
Something like faith,
Deep in our skin:
Everything in its time.

All things in time –
Some things come quick, some things come easy, But all things will come
Given the chance,
Given the room.
I can’t decide the length of a day,
The depth of an ocean –
I just decide what to explore.
Maybe it’s just wanting it more –
Want it enough,
Let it begin.
Everything in its time.

No way to know –
No guarantees,
Nothing but choices.
Plenty to lose,
Plenty to fear –
Let’s make a deal:
I will be here,
Waiting with you,
Trusting what’s true,
Stumbling blind
But knowing we’ll find
Everything
In its time.

Seeing Jason Robert Brown in concert is to discover joy. His musical stylings run the gamut, but he has his own syncopated beats, infused with blues notes and resolve. It is hard to video because my body is constantly absorbing, dancing and memorizing his musical vocabulary. Brown is a musicians, musicians who heals the world with his profound lyrics. This is a show not to miss.

Jason Robert Brown: Feinstein’s/54 Below. To get tickets go here.

Stephen SorokoffJune 15, 2022
Read More
Scroll for more
Tap
The Glorious Corner
My View: It’s In His DNA…Jason Robert Brown at Feinstein’s/54 Below