Part Two: Up Close With Paula Vogel and Rebecca Taichman Co-Creators of Indecent

Part Two: Up Close With Paula Vogel and Rebecca Taichman Co-Creators of Indecent

Writer Paula Vogel and director Rebecca Taichman, along with the stars of their play Indecent met the press at their rehearsal studio. This prolific drama that captured audiences when it played this summer at The Vineyard Theatre. The play which is done with music was inspired by the Sholem Asch’s 1923 controversial play God of Vengence. Closed on the night of their Broadway debut due to th lesbian kiss which was considered Indecent. The cast and producers were arrested and jailed on obscenity charges. 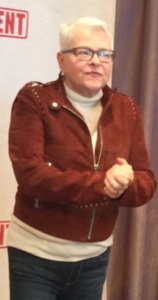 Indecent represents a long-awaited Broadway debut for Vogel, who won a Pulitzer Prize for How I Learned to Drive.

In the second part of this two part series T2C talks to Ms. Vogel and Ms. Taichman one on one.

Indecent began it’s journey at Yale Rep, moved on to La Jolla Playhouse, then landed at The Vineyard Theatre. Starting April 4th Indecent will start previews April 4th and opens at the Cort Theatre on Apr. 18, 2017.