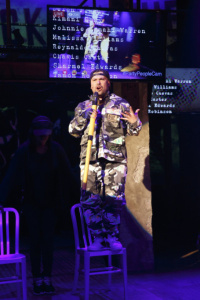 History doesn’t just go away it comes back and resurges. In Party People, a new musical commissioned by the Oregon Shakespeare Festival now playing at The Public Theatre, we are introduced to the two of the most radical civil rights groups: the Black Panthers and the Young Lords. Featuring a script by the internationally produced theater ensemble Universes, which includes; Steven Sapp, Mildred Ruiz-Sapp, and William Ruiz a.k.a. Ninja, who all take part in the show. The play is based on dozens of interviews conducted by Tommy and Universes. Music is the driving force here and Universes has combined with the sound design collective Broken Chord. What you get are soulful voices, gospel, rap,  and the groovy 60’s sound. This show has soul and it’s motto “The struggle for justice is always worth it” rings true in this day and age. 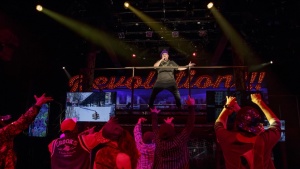 The show has a giant red metal “Revolution” sign across the back wall, while fifteen screens surrounding the theater stream with video and live feed (projection designer Sven Ortel) from a hand held camera on stage recording video testimonials. Like Mark in Rent, the show begins with Malik “Mk Ultra”(Christopher Livingston) filming. The majority of the play is the build up for a reunion party for the Black Panthers and the Young Lords, (a Puerto Rican Nationalist group that once organized a series of trash burnings to protest erratic collection in Spanish Harlem.) You can see more of this in I Like It Like That. Two young activists Malik and Jimmy, whose alter ego is Primo the Clown, are producing the event  (William Ruiz.) They plan to stream live on Facebook, but Panther Omar X (Steven Sapp) and Jimmy’s uncle Tito (Jesse J. Perez), are worried and afraid to open old wounds. As the Puerto Ricans and blacks unite with their closely knit viewpoints, we also see the infighting between the two groups. As surprise guests and confrontations abound, we learn of FBI infiltration and the devastating impact of the drug epidemic.

A point of interest is how the Panthers were actually started in Chicago although most only know about their New York roots. As their neighborhoods had been neglected they chose to take action in the streets creating free health clinics and feeding children breakfast before school. 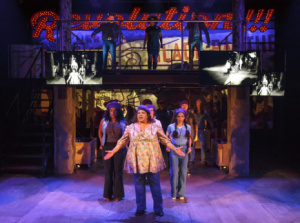 The twelve person cast is a true ensemble, with Gizel Jimenez’s fantastic voice and Mildred Ruiz-Sapp’s powerhouse vocals. Ruiz’s rapping is solid and explosive. Others in this uber talented cast are Oberon K.A. Adjepong, Michael Elich, Ramona Keller,  Sophia Ramos, Robynn Rodriguez, and Horace V. Rogers. The inculsive casting of all ages and ethnicities unites to tell the story as an informative presentation of this sensitive material. With bilingual songs and dialogue, dancing and reciting spoken word, this cast is a dynamo. 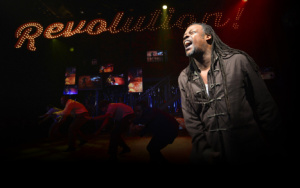 Millicent Johnnie’s choreography is a tight combination of Motown-meets-hot salsa. As the performers dance through this racial immersion, an empathy for radicals emerged from every era. 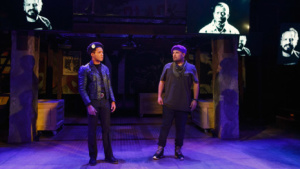 Liesl Tommy’s (Eclipsed) direction is exciting and adds an energy that is explosive. I would have liked a warning speech before the show from the theater about gun usage and safely during their reenactment of the Post Black Night murders, as five people aimed and fired at actors and the audience with cap guns and flashing strobe lights. It was a scary game of trust. 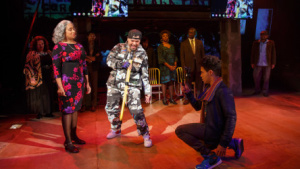 Marcus Doshi’s industrial, multi-level set is tagged with graffiti and seamlessly transports from the streets to clubs to underground meeting houses. Meg Neville’s fabulous costumes (where the women are mostly in pants) are tough. It was fun to see the eras shift through the street clothes.

As a memorial during the reunion, a bullet-ridden door is brought on stage to commemorate the killing of young, innocent Fred Hampton who was poised to become an important leader. Chicago cops blew through his door with bullets and shot Fred in the head while sleeping. Actors walked through the door reciting names of those lost to the party. The play then cites arrests, deaths and drugs for the demise of the Black Panthers and yet credits the women who rose to power to rebuild their men and the party. The song belted by the females called “Pussy Killed The Party,” was powerful and empowering.

This show is passionate, tempestuous, turbulent and a must-see in this political climate.