Pass Over Should be Passed Over 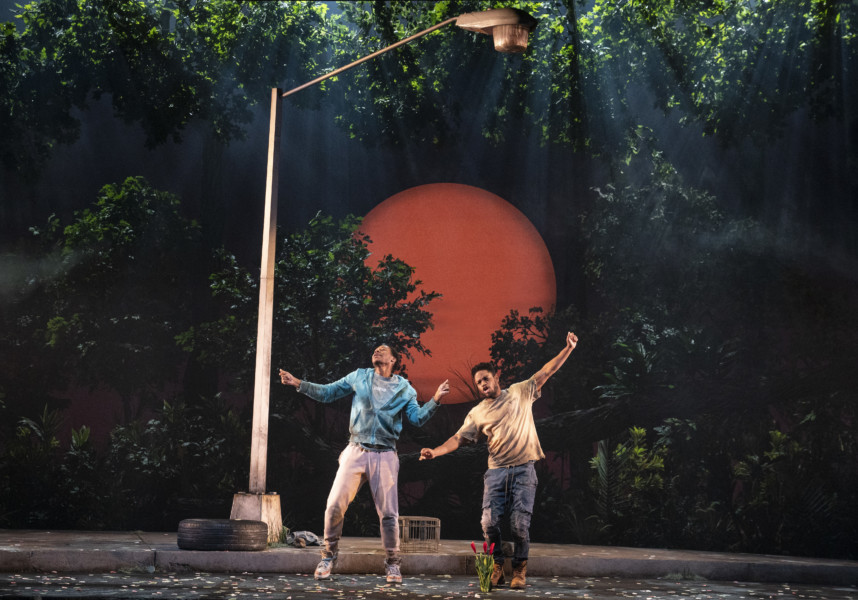 Pass Over Should be Passed Over

A show like “Pass Over” should be played off off Broadway and not at the August Wilson Theater on Broadway. One of the many problems with this play is that it goes nowhere; it never really challenges us and it surely doesn’t move us one way or the other. It more or less floats in the rarified atmosphere.The shows premise is two young men from Chicago living in the hood waiting for their lives to change. The problem with its two characters is that Moses (Jon Michael Hill) and Kitch (Namir Small Wood) do nothing to help themselves. When you add bland direction by Danya Taymour into the mix, the play goes downhill fast. In “Pass Over” Taymour never has the audience feeling any empathy for the two characters, we only see two men who want to get off the block and into the promised land, however, they never discuss any plans nor dreams other than their top ten list as to what they would do if they could.

Playwright Antoinette Chinonye Nwandu plays it safe when it comes to the street life that these two know. She never commits to the point she is trying to put forth… are they victims of society? Where are they from? What put them on this street and why exactly do they behave the way they do. In the movie version directed by Spike Lee it is at least angry (when aren’t Mr. Lee’s movies not angry). Here, however, the play suspends and hovers never landing anywhere important.

Wilson Chin’s set design is equally as bland as Danya Taymour’s direction. In the program we are given many different times and places, yet for the good part of the play we only see the baron street set. Only Sarafina Bush’s costume design is worth noting in this play. For a play that started at Steppenwolf in 2017 before transferring to LCT3 in 2018, one would think that the show’s bugs would have been worked out before it came to Broadway. Why has Mister (Gabriel Ebert) shown up in this play? Who is he and what is his reason for even being in this body of work?

Further adding to the confusion is that the play goes back in time apparently when Moses and Kitch talk about how they are Egypt and that the promised land has left them behind. This was all so confusing… why not change the set or at least the lighting? Something that would let the audience know that the period of time has changed? Throughout the play Nwandu takes us to different periods of time and yet we never know what she is trying to communicate. When the playwright casually mentions the plantation and a desert city built by slaves, evidently (and unknowingly) we are supposed to know that these are period pieces even though the writing nor the direction takes us there.

In what was billed as a “Waiting for Godot” , it is more like “Of Mice and Men.” Kitch cannot think on his own without Moses, he will follow Moses anywhere, believe anything that he says and he will go into the abyss for ever more because of his weaknesses and his own lack of thought.

The most obvious problem with “Pass Over” is that the two central characters speak like street thugs; if the writer was trying to draw any sympathy whatsoever she should have made these two more vulnerable to society at hand. The only vulnerability we see is when Moses refuses to eat Mister’s food that he graciously offers to these strangers that he just met. Even in this scene however, we are not sure if Moses distrusts the man because he is white or that he just doesn’t like him for being white. It may well have been a better scene if Nwandu stated one way or the other but she doesn’t, and like the rest of the play we are left wondering where she is taking us. To add grit to the play, the writer adds the white cop into the mix ( same actor for both roles) good whitey, bad whitey. In no way is Ebert any more believable in his role. A cop in the hood who acted like that would never survive a city let alone Chicago nor New York. Evert’s characters are part nerd, part duffess in this role; neither intimidating nor edgy.

“Pass Over” is the first show to open on Broadway since its closure due to Covid 19. I am hoping that the other new plays to follow are better than this one or Broadway will have a very difficult go of it.