I saw Passion Nation a few weeks ago, but hadn’t the heart to review it right away. Billing itself “as the first of its kind, immersive dining experience, exciting & enjoyable as a standalone happening but especially developed to get you ready for your Broadway experience. This ‘5 dimension’ event harnesses the combination of live actors, breathtaking light projection technology and sound design, and unique integrated food and drink, to tell an inspiring tale of American optimism and accomplishments.” 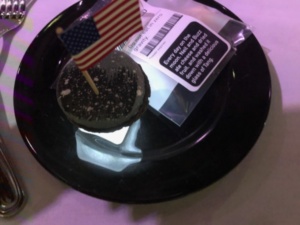 Created and produced by Jerry Stone and David Palmer, the event space at Lightbox Event Space, 248 West 37 Street, is well done. As we entered we were served refreshing cocktails. Loved the virgin Margarita. Yes, there was alcoholic ones as well. We were shown to our table were crudités of fresh vegetables and a dressing, artisan rolls and butter, bottles of res, white, flat and sparkling water awaited us. As the show proceeded we began in 1969 with the landing on the moon with Neil Armstrong and Buzz Aldridge. The skit was short and rather fast. To celebrate we were served an savory macaron atop an illuminated “ice cube,” two slices of dehydrated apple rings and a vile a Tang. Now for presentation A+, for the feeling of nostalgia with the Tang A+, as for taste C. 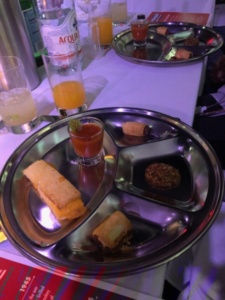 We then jumped back in time via video projections in 360 degree motion to 1945 as we celebrated the end of the war with the infamous kiss in Times Square. The nurse turns into Rosie the Riveter, who sings and dances. The next course served on a round TV type dinner tray; a forth of a grilled cheese sandwich, a condiment size of smoky tomato soup, two miniature pigs in blankets with an odd ketchup mustard combo, all of which were served cold, minus the soup.

We hear about the 1835, conflicts between Thom Paine and Abe Lincoln but then jump to 1920 and prohibition as we raise a glass of wine, we are served a cheese platter because Lincoln loved cheese, with some olives for the table to pass. As we do the cast gives information and jazz age dance routines. More on the information later. 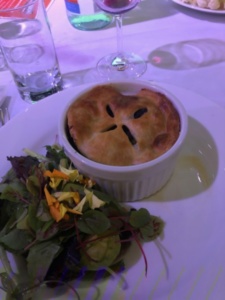 the 1858 debates between Abraham Lincoln and Stephen Douglas which was done with some rather cool live projections. The meal Vegetarian Pot Pie with some wilted salad with hardly any dressing. Now the Vegetarian version was horrid, the person next to me had a Chicken version, which gratefully they switched. The Pot Pie was served in what they normally serve flan or Creme Brûlée’s in so about 4 tiny spoon fulls. By now I am seriously hungry as it was like having four courses of appetizers. The wine was poured freely, which is great if you drink. Though the The “four-course meal” is intended to align with different eras, I just did not get the menu choices.

The last vignette was Alexander Hamilton’s mother (Annie-Sage Whitehurst) who has been our guide and her son (Terrell Foster) who leads us in a kumbaya type song.

Also in the cast were: Jenna Robino, Jordan Gwiazdowski and Omar Perez. The performers were talented, there just isn’t enough for them to do. The show by writer-director-choreographer Bill Castellino (Desperate Measures and Cagney) whose work I normally love, has created a historical storyline that feels disjointed and misses some really fabulous points.

Ok so if you are going to enlighten me here, are some historical facts we missed.

The most shocking thing is that on March 22, 1972 the equal rights amendment was passed by the Senate, however 38 states had to approve it. As of May of this year we have 37. Now we would have had 41, but in 1972 Idaho, Kentucky, Nebraska, Tennessee, and South Dakota receded their yes vote. In order to be a passionate nation, doesn’t this have to happen?

In 1984, a show called Tamara opened in Los Angeles, where they feed you a wonderful Intermezzo dinner. The play opened in New York in 1987 at the Park Avenue Armory and ran for five-years. This was one of the most amazing interactive theatre productions I have ever seen. I saw it multiple times. When you say interactive, this is what I compare it to. As for the 5 dimensions and the whole concept, I just didn’t see it.

Passion Nation runs through December 9th and then resumes January 3 through 27th, 2019 at the Lightbox Event Space, 248 West 37th Street. Drinks are included with dinner, but no dietary restrictions are accommodated since it is a set menu.