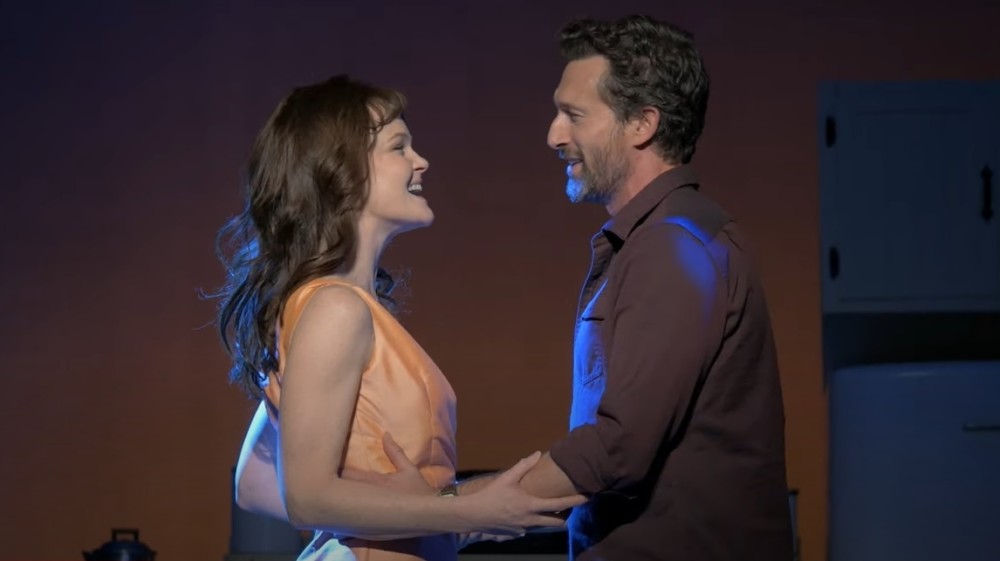 Yes, Virginia, there is really Broadway calibre theater outside of New York City. Proof positive is the deeply passionate and beautifully produced revival of the musical, The Bridges of Madison County by Jason Robert Brown (The Last Five Years, Parade, Songs for a New World),  and Pulitzer prize winning playwright (‘Night, Mother) and Tony award winning librettist (The Secret Garden), Marsha Norman, now in a limited run at the Axelrod Performing Arts Center in the tiny hamlet of  Deal, in Monmouth County, New Jersey.

The 500 seat Axelrod Performing Arts Cemter is a spacious but cozy gem, which never feels too big for this warm, intimate musical. Producers Jess Levy and Artistic Director/Producer Andrew Deprisco have assembled a wonderful company of talented non-Equity actors together with top Broadway guest artists, along with with exceptional musicians and designers, all under the expert direction of original cast member Hunter Foster, to create a flawless production that should not be missed.

Bridges, based on the popular romance novel by Robert James Waller, tells the story of Francesca Johnson, a 40something Italian woman, played here by two-time Tony award nominee, Kate Baldwin. She escapes the ruins of Naples, Italy at the close of WWII as the bride of an American soldier named Bud, played by veteran Broadway actor Bart Shatto. Sixteen years later, the life she dreamed of has devolved into one of boring domesticity, as a housewife on an isolated farm in Iowa. There she has raised two children, Michael (Thomas Cromer) and Carolyn (Emily Pellichia), both of whom she loves very much. But she has settled for a passionless marriage with a man who can no longer give her what she really needs, and her life is ripe for change. Enter, Robert Kincaid, played by Broadway (The Light in the Piazza, A Little Night Music revival) and television star (Filthy Rich), Aaron Lazar. Robert is a photographer for National Geographic on assignment to photograph seven historic bridges there in Madison County. He arrives while Bud and the kids are out of town at the county fair for several days, leaving Francesca home alone. Their mutual need for connection blossoms quickly into an unexpected and intense affair. I’ve been privileged to follow both Mr. Lazar and Ms. Baldwin in their careers on Broadway over the last number of years. For both of them, this is a chance to sink their teeth into arguably their most challenging musical theater characters to date. 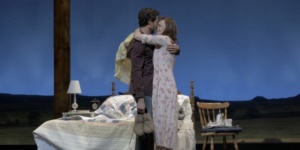 Ms. Baldwin, ever luminous, tears our hearts out as she struggles between accepting the less-than-satisfying life she has chosen and pursuing the passion that beckons to her. Ms. Baldwin just participated in a panel on Broadway World hosted by Sara Jane Ford, whose delightful web series, The Aging Ingenue, explores what happens when a former ingénue must reinvent herself as she turns forty. On the panel, Ms. Baldwin talks about coming to New York after college and being told that she seemed too mature to play inexperienced, vapid ingénue roles. But, said one agent, she should expect to come into her own as a leading lady when she is a little older. Indeed she has. I’ve watched Ms. Baldwin grow on Broadway from the innocent charm of Sharon in Finian’s Rainbow, to the more experienced Irene Malloy in Hello, Dolly, then most recently, earning her wings as a musical theater mom in Superhero off Broadway.  Francesca is the perfect role for her now, letting her show all her beauty, passion and depth of experience. She brings the very best of wife, mother and lover to the Axelrod stage. Her glorious soprano voice, coupled with her deeply felt interpretation of the role, is nuanced and thrilling, in song after wonderful song from Jason Robert Brown’s lush score. Mr. Lazar plays Robert with a laid-back manner and solid inner strength that draws Francesca to him. As he did so passionately as Fabrizzio in The Light in the Piazza, and as Carl Magnus in A Little Night Music, Mr. Lazar wins us over with his soaring tenor voice and straight forward sincerity. I hope he will get more opportunity in the future to tap into his lighter side as well, and show more of his great personal charm. If you want a taste of that, watch him singing “Oh, What a Beautiful Mornin’ “ to a group of adoring older folks in a Jewish senior center, in a clip now on YouTube. Together, Mr. Lazar and Ms. Baldwin have a blazing chemistry on stage that makes us long for them to be together. This, unfortunately, also highlights the big weakness in the construction of this show. If this show is so great, why wasn’t it a commercial success?

Musicals are like football games, where you root for your team, the protagonists, to win. When they don’t get what they are after, it’s hard to cheer. Ms. Norman was slavishly loyal to the plot of the book, in which (spoiler alert!) Francesca chooses to stay in her loveless marriage for the sake of the family. Even when her husband dies, she doesn’t reach out to Robert, which she certainly could have done. Then Robert dies, and all she has left is a memory. This, to me, is nothing to cheer about.

When Alan Jay Lerner rewrote the ending to Pygmalion, and let Eliza return to Higgins in My Fair Lady, he declared that he did so because he thought Shaw was wrong.  There’s no law against changing your source material if it serves your adaptation. If the writing team had let Robert and Francesca reunite on the bridge for a second chance at love again later in their lives, and finally find happiness together, I think this show might have been a more popular piece, too.

Nicki Yarnell as Francesca’s nosy neighbor, Marge, and her long suffering husband, Charley, nicely played and sung by Mark Megill, are just cardboard comic relief, watching with actual binoculars from the sidelines. A song between Marge and Francesca about the sacrifices of marriage would have done a lot to give purpose to Marge’s role, and set up Francesca’s decision to stay.  But, alas, it isn’t here.

Because Bud is clueless by nature, he can’t sing anything particularly knowing either. There is a pivotal scene between Bud and Francesca when he returns from the county fair, where the writing team could have given a glimmer of hope for their relationship being better as a result of this affair. but that doesn’t happen either.

Worst of all is that Francesca’s most important moment in the story, when she decides to let Robert go, is not musicalized. Neither are the years that follow, as we watch her children grow and leave her in a perfunctory denouement.  In the end, the audience is left struggling to connect with Francesca’s choice emotionally.

Shows do get re-written after they come and go on Broadway.  Hopefully, the writing team will choose to revisit this material someday, and plug its emotional holes. In the meantime, there is much to appreciate and enjoy here.

Director Hunter Foster, who played Bud in the original production, stages this new production with emotional subtlety and physical fluidity. The open, unit set of the bridge by Anna Louizos, remains against an ever-changing sky by lighting designer Paul Miller, as various scenic elements are rearranged in nicely choreographed movement by the cast, who stay subtly but effectively in character.  Lauren Roark’s simple, authentic costumes nicely  complete the look of the show.

The string ensemble, expertly conducted by musical director Keith Levenson, is absolutely first rate, creating a lush background for all the gorgeous singing.  No wonder this show won Mr. Brown the 2014 Tony for best orchestrations.

Among the supporting cast, particular kudos go to Guiliana Augello as Robert’s ex-wife for her hauntingly beautiful song detailing the rise and fall of their relationship, and Ms. Pellechia as the Johnson’s daughter, who brings a delightful variety and quirkiness to her role.

So if you love musicals with soaring songs and a romantic center, go experience all the warmth, emotion and beauty of this fine production while you can through Sunday, March 27th. Purchase tickets for The Bridges of Madison County by calling 732-531-9106 ex.14, or  visit the Axelrod Performing Arts Center website at https://www.axelrodartscenter.com/the-bridges-of-madison-county.