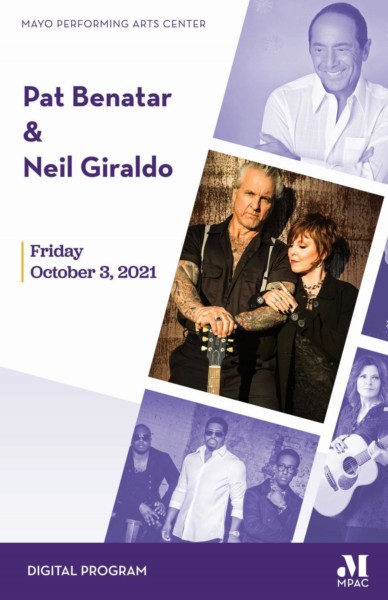 Born in Brooklyn N.Y., Patricia Mae Andzejewski, of Polish and Catholic background moved to Long Island shortly after her birth. At 5 feet 0 Inches, Pat Benatar can belt out songs. Trained in opera, Benatar is still a rock and roll force as she proved tonight at the bucolic Mayo Performing Arts Center in Morristown, New Jersey.

Coming out with a long sweater and bell bottom pants, Benatar looking every bit the rocker, at 68.

Opening with “All Fired Up,” I was a little concerned; that the song was flat and underwhelming with just a four piece band. The second song: “We Live for Love,” was more upbeat, but not quite up to ones expectations. It was after this song that she gave a heartfelt talk and let the audience know that she was glad to be back on the road after eighteen months home. She confessed that she was not feeling well and that she did not want to cancel this evenings performance. Informing us that the band would be making some adjustments and that she would work as hard and as long as she could.

Dedicating the third song to getting rid of Covid, she belted out “Invisible,” and Benatar began to hit her stride. By the time she sung the bands fifth song “We Belong,” it was the old familiar Benatar in concert… ripping notes to shreds and with her famous hip wiggle had the crowd wanting more.

Pat Benatar came on the Pop, Pop/Rock and Rock and Roll scene in 1979 with her debut album” In the Heat of the Night”. Two singles were hits off the album: “Heartbreaker” and “We Live for Love”. Her second album in 1980, “Crimes of Passion,” was her most successful album peaking at number 2 in North America and France. Its single “Hit Me with Your Best Shot,” reached the top 10. More than that it established Benatar as a certified rocker. Her 1981 album, “Precious Time,” was another success topping the U.S. album chart. Her less successful “Get Nervous” in 1982, sold less than the previous albums, but still had a huge hit with “Shadows of the Night”. Her 1983 “Love is a Battlefield” was her biggest hit in most countries and hit number 5 on the U.S. Hot 100, as did “We Belong” the next year.

Pat Benatar has released 11 albums, most of which have been successful. After marrying her high school sweet heart in 1972, she divorced in 1979. She married her second husband, Neil (Spider), Giraldo in 1982 and they have been married ever since.

Neil Giraldo is a musician, record producer, arranger, and songwriter best known as the musical partner of Benatar for more than 40 years. He has also performed, written and produced for artists including Rick Springfield, Kenny Loggins and more. Giraldo’s diverse work has sold over 45 million records and his contributions have produced five Grammy Awards, with an additional four Grammy nominations.

Benatar performed “We Belong” for the evenings sixth song, by then, her and the band were tighter than they had been all evening. Songs that have been the bands staples soon followed: “Hell is for Children,” “You Better Run,” “Hit Me with Your Best Shot” and “Love is a Battlefield”. Two times during the evening the band yielded to Giraldo playing the piano with Benatar sitting by his side. “After the Fall,” will be featured on their up-coming Broadway show, We Belong. The later song was sung slower and more melodic, I think because she was under the weather and this gave her respite for what was other wise was a great standing and plugged concert.

Benatar, at 68 showed her fans why she still has one of the greatest voices in rock.