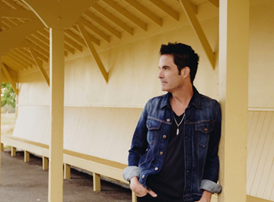 The producers of the Broadway-bound international music sensation Rocktopia are thrilled to announce that the Grammy Award-winning and multi-platinum-selling lead singer of Train, Pat Monahan, will make his Broadway debut for the first three weeks of the run, March 20 – April 8, 2018.  An explosive musical event that fuses the most iconic 20th-Century rock with world-renowned classical compositions, Rocktopia features world-class vocalists—backed by a full symphony orchestra, an electrifying rock band, and a choir performing the works of musical innovators including Journey, Mozart, Queen, Handel, U2, Tchaikovsky, Heart, Beethoven, Led Zeppelin, Copland, The Who and more. Rocktopia makes its Broadway premiere in a six-week run, March 20 – April 29, 2018, at The Broadway Theatre (1681 Broadway), with an opening night set for Tuesday, March 27.  Tickets are now on-sale at Telecharge.com.

As founder and lead singer, Monahan has led Train to great success. The band has sold more than 10 million albums worldwide and more than 30 million tracks, with multiple platinum/gold citations, including 3 GRAMMY awards, 2 Billboard Music Awards, over 13 songs on the Billboard Hot 100, and dozens of other honors. As part of Rocktopia, Monahan will perform multiple songs throughout the show, including Kashmir by Train’s favorite band and musical inspiration, Led Zeppelin. Regularly covering Led Zeppelin music in live shows, Train recorded a cover album of Led Zeppelin II in 2016. In addition to songs by Zeppelin and other artists, Monahan will perform a special encore performance featuring a hit Train song merged with a classical composition.

“The entire Rocktopia team is thrilled to have Pat Monahan join us at the Broadway Theatre. Pat’s incredible talent and background lends itself perfectly to our unique musical vision, says Rob Evan, co-creator of Rocktopia. “The fusion we have created with Train’s song for the encore is truly exciting!”

An inaugural performance of the show, “Rocktopia: Live from Budapest” produced by Two Hands Entertainment/Jeff Rowland, was recorded in front of a live audience in June 2016 at the 19th century Hungarian State Opera House for PBS. It was performed with the Budapest Philharmonic Orchestra with six vocalists, a five-piece rock band, the Hungarian State Opera Chorus, and the Jazz and More Choir. ROCKTOPIA has since toured over twenty cities in the United States, featuring local symphonies and choirs across the country.

Suzanna BowlingSeptember 15, 2022
Read More
Scroll for more
Tap
APAP And You Are There Part 2
Divine Horsemen: A Story We Know