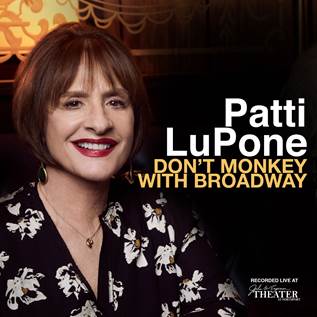 Currently starring on Broadway in War Paint, two-time Tony Award and Grammy Award winner Patti LuPone returns to her roots with her new double-disc live album, “Don’t Monkey With Broadway.”  Recorded in concert in her hometown of Northport, Long Island, at the John W. Engeman Theatre, Ms. LuPone takes you behind the curtain on her life-long love affair with Broadway and her concern for what the Great White Way is becoming today.

Broadway Records announced today that Patti LuPone: Don’t Monkey With Broadway will be released digitally and in stores on Friday September 29, 2017. The album is currently available for pre-order at www.BroadwayRecords.com and Amazon.com.

Produced by Michael J. Moritz Jr., “Don’t Monkey With Broadway” features musical direction and arrangements by Joseph Thalken. Ms. LuPone is also joined by the Northport High School Tour Choir. This is Ms. LuPone’s third album with Broadway Records, following “Far Away Places – Live at 54 Below” and the reissued “Matters of the Heart.”

2. “Plot didn’t matter… neither did gender or age.”

4. “In my senior year at Northport High School…”
5. Happy Talk

6. “I went to my very first audition in New York City…”

8. “This musical inspired me…”

10. “Where was my big Broadway musical?”

15. I Could Write a Book/There’s a Small Hotel

3. Sit Down, You’re Rocking the Boat

5. “I am a product of the Northport Public School System…”

8. “There are two roles I would be perfect for.”

15. “There are a few constants in that neighborhood…”

16. Give My Regards to Broadway

17. The Ladies Who Lunch

Broadway Records (Van Dean, President) is one of the preeminent theatrical record labels to produce original cast albums for major Broadway and Off-Broadway shows including the Grammy® and Tony Award-winning The Color Purple (2015 revival), the Grammy® nominated Matilda The Musical and Fiddler on the Roof (2015 revival), Allegiance and Disaster! among others. Recent releases include Anastasia, Bandstand, Groundhog Day, The Lightning Thief, The Visit, Doctor Zhivago, Side Show (2014 revival), Bonnie & Clyde, Big Fish and NBC’s television events, The Wiz Live! and Peter Pan Live!. The label’s critically-acclaimed “Live at Feinstein’s/54 BELOW” series features top Broadway stars including Patti LuPone, Aaron Tveit, Annaleigh Ashford, Norbert Leo Butz, Sierra Boggess, Laura Benanti, Emily Skinner & Alice Ripley, Frank Wildhorn and Friends, Micky Dolenz and many others.  Most recently, Broadway Records launched the Broadway for Orlando initiative (in partnership with creators Seth Rudetsky and James Wesley) as a response to the Pulse nightclub mass shooting. The all-star benefit single, “What the World Needs Now is Love” (recorded at NYC’s Avatar Studios on Wednesday, June 15, 2016) has been downloaded more than 65k times and raised over $100k to date and counting, with 100% of the proceeds benefitting the GLBT Center of Central Florida. Additionally, the song reached No. 1 on the iTunes song chart in its first week of release and broke into the Billboard Top 100 with no commercial radio play. To learn more, visit BroadwayRecords.com.