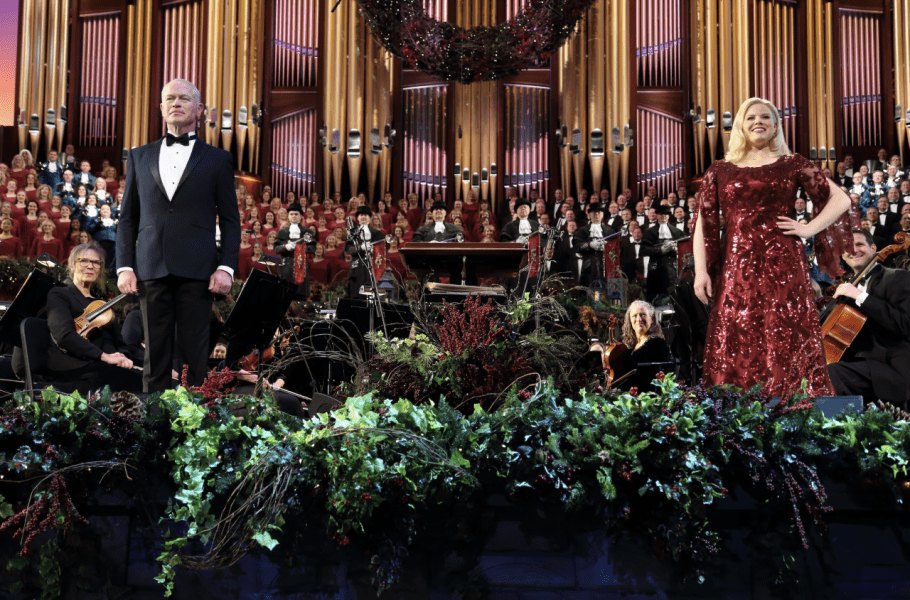 This December, the nation’s largest stage for the arts, PBS, and inspirational family entertainment network BYUtv will air and stream “O Holy Night: Christmas with The Tabernacle Choir” featuring Tony Award-nominated Broadway star Megan Hilty (“Smash,” Wicked) and renowned film and television actor Neal McDonough (“Band of Brothers,” “Captain America: The First Avenger”). This marks the 19th annual “Christmas with The Tabernacle Choir” television special, which has been the No. 1 primetime holiday program on PBS for 17 years since it first aired in 2004. The engaging 60-minute program, presented by GBH, will premiere on Tuesday, Dec. 13, at 8 p.m. ET (check local listings) on PBS, PBS.org, and the PBS Video app, and on Sunday, Dec. 18, at 8 p.m. ET on BYUtv, BYUtv.org and the BYUtv app.

“My experience with The Tabernacle Choir, music director Mack Wilberg and everybody behind the scenes was almost indescribable,” said Hilty, who, per the program’s tradition, filmed the special in December 2021 to air this year. “Every single second of it was infused with joy and there is so much incredible attention put into every detail of the show. You can feel the love in every set decoration, in the lighting plot, in everything. I think this concert is the ultimate Christmas celebration.”

In this year’s “Christmas with The Tabernacle Choir” special, Hilty joins the Choir, Orchestra, trumpeters and bell ringers in performing well-known holiday tunes, classic Christmas carols and hymns. Traditional Irish musical numbers and elements are woven throughout the program in honor of Hilty’s and McDonough’s shared heritage. As the narrator of the evening, McDonough reflects on the role that family, heritage and traditions play at this time of year. Combining music and musings with unique Irish cultural nods, “Christmas with The Tabernacle Choir” is a deeply personal and uplifting program that inspires hope and welcomes the spirit of the holiday season.

“Creating this show of Christmas, and talking about the things that I love most, it’s truly a highlight of my career,” said McDonough. “It’s so emotional and so powerful what we say on stage. The whole true meaning of the show is all about family. I am just so honored to be part of a show, alongside a world-class group, that really talks about life. It’s about kindness and forgiveness and realizing that it’s not about us, it’s about the greater good. For me to be able to express how I feel onstage, it’s such an empowering feeling because I haven’t really had that ability to be able to speak about how I feel about life and how I like that to be with my art. It’s an inspiring, humbling, fantastic feeling.”

“When we discovered that Megan Hilty and Neal McDonough shared Irish heritage, everything clicked into place and we decided to capitalize on that for this year’s Christmas concert special,” said Mack Wilberg, music director of The Tabernacle Choir and Orchestra at Temple Square. “It was an absolute pleasure working alongside these two generous performers who bring such beautiful perspectives on life, faith and family through time-honored traditions. We are thrilled to share this performance with everyone and celebrate its shining message of hope and light.”

Megan Hilty is a Tony Award-nominated singer and actor, most recognizable for her portrayal of Ivy Lynn in NBC’s musical drama “Smash.” She has led a dynamic career both on stage and on screen, having graced the Broadway stage as Glinda in “Wicked,” Doralee Rhodes in “9 to 5: The Musical” and Brooke Ashton in “Noises Off.”

A multi-talented and award-winning actor, Neal McDonough has been seen in over 100 films, including “Captain America: The First Avenger,” “Forever Strong” and “Greater.” He has starred in nearly 1,000 hours of major television dramas ranging from “Band of Brothers” to “Suits” to “9-1-1: Lone Star.”

“Christmas with The Tabernacle Choir” is co-presented by GBH, the largest creator of PBS content for TV and the web, and BYUtv, the television home of the Choir’s weekly program “Music & the Spoken Word.” BYUtv produced the special.

Funding for “Christmas with The Tabernacle Choir” on PBS is provided in part by Ronald C. & Kaye Gunnell and Charles and Janet Stoddard.