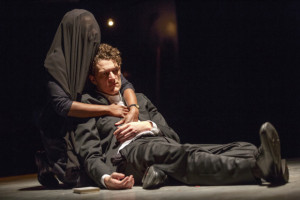 Once upon a time, there was this amazing theatre company called Paul Sills‘ Story Theater, who knew how to tell stories with improvisational theater techniques, fascinating character study and comedy divide from Second City. John Doyle’s adaptation of Henrik Ibsen’s Peer Gynt at Classic Stage could use some of that style. Under Doyle’s direction there is of course clever staging, but this piece is long (over two hours NO intermission) and it is unfortunately not interesting enough to sustain most of the audiences attention.

Part of the problem is the casting of Gabriel Ebert as the title role. He is just not layered enough or likeable enough for us to buy into his journey. Becky Ann Baker as Peer’s mother speaks in a Southern Accent yet she lives in Norway. Maybe this is in the style of Ivo Von Hove’s thinking that actors do not have to have the right accent to play the character. Is this the next “politically correct” statement?

For those who do not know Peer Gynt we follows the lead (Gabriel Ebert) who is a poet, a braggart and a liar from Norway and the home of his mother (Becky Ann Baker) to a wedding where he seduces the bride and yearns for the virginal and pious Solveig (Quincy Tyler Bernstine). He meets the daughter of the Troll King (Dylan Baker), (Jane Pfitsch) leaves her for the coast of North Africa and ends up in a lunatic asylum. As Peer makes his fortune he becomes more and more self-involved and superficial. Finally, Peer is cast to his death, by a Button Molder (Adam Heller) because his mediocrity warrants the need to be melted down.

Quincy Tyler Bernstine is luminous. Dylan Baker always a joy to watch and Adam Heller makes the most of his time on stage.

Peer Gynt has a lot to say but this production keeps too much in the dark.