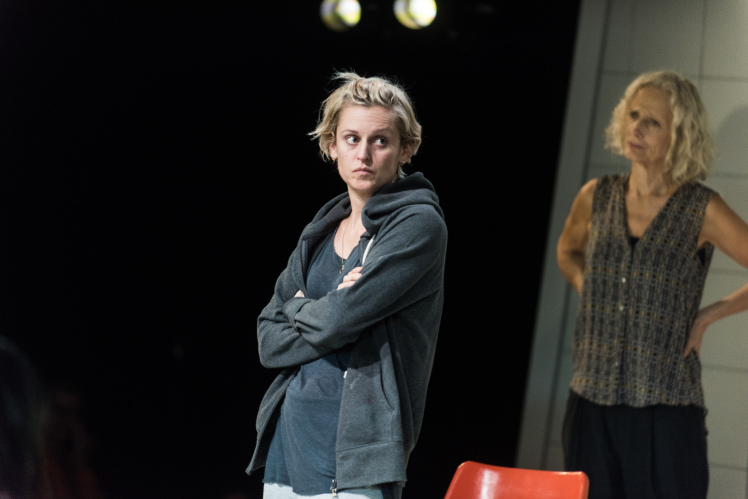 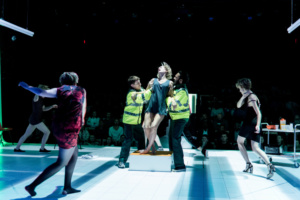 “I am a seagull,” she cries, but no, that’s not quite right. Denise Gough, the Olivier award winning actress, on the other hand, is getting it all perfectly right in the phenomenal People, Places & Things. It’s a whirlwind performance that is currently taking complete control of center stage at St. Ann’s Warehouse in this National Theatre transfer. It is Gough’s character, the actress going by the name of Emma, that can’t quite get the lines out as written as she takes the stage as Nina in the first few minutes of Duncan MacMillan’s (1984) thrilling and jolting new play. Once the fourth wall comes crashing down, all the Ninas and Emmas come out to play with a brutal and aggressive force. During the wild ride that is Act One, this modern day story of addiction and denial rises itself far above the average 28-day story of rehab and redemption. In many ways, the story feels typical. The standard idea of a rehab story revolving around an addict coming to terms with the addiction that most definitely resides inside her. But in no way is this production, directed by Jeremy Herrin (RSC’s Wolf Hall) standard in the slightest. It flies high, above any expectations that could exist, and then excells beyond even that.

Even when we don’t consciously realize it, every word and moment has intense meaning in Emma’s life and great importance in the overall arc of this fascinating tale.  During that desperate last ditch phone call made in the rehab’s admitting room, we first think that conversation is just a comic scenario draped in dark humor and blunt intensity without much future weight. But we couldn’t be further from the truth. All things come back, like a nasty flashback determined to haunt the user over and over again. 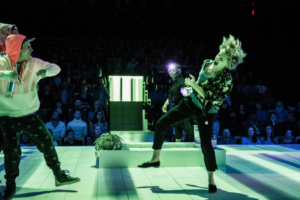 During the first hyperkinetic withdrawal (incredible movement design by Polly Bennett), the walls actually crawl with a magical, almost violent merging of sound and light. They play with each other most effectively in a pounding, disturbing, and shocking trip by the master designers: set: Bunny Christie; costumes: Christina Cunningham; lighting: James Farncombe; music: Matthew Herbert; sound: Tom Gibbons; video/projection: Andrzej Goulding. This lone wolf never before has had to depend on the kindness of strangers, but within these white walls, with these other people, in this place, and attempting to use this thing called rehab and recovery, her descent is wondrously brutal and magnificent. The rest of the company, as various doctors, therapist, and fellow rehab residents, take on this wild cat. They run with her, battle her, dismiss her, and try, foolhardily to tame her. Standouts in this tight group of solid professionals are the multi-role playing caregiver and care take-awayer, Barbara Marten (National’s War and Peace) who is thick with understanding and empathy two-thirds of the time, until that last character and scene. Also fantastic are the fellow rehab patients, Mark, played by the ever so talented Nathaniel Martello-White (RSC’s Marat/Sade), and fellow wild one, Paul, perfectly realized by Kevin McMonagle (National’s Junkyard).

The thing we don’t realize about MacMillan’s play is that every word said hangs in the theatrical space in just the same way our childhood, our old room, and all it’s history and contents literally hangs over our head. Especially during all those moments of Emma hiding and exposing. Only at the end, do we realize the intense meaning and heaviness of this and every second of this smack down of a play. Gough is transfixing, and to miss her in this would be a crime. Unlike the good therapist, I don’t want to never see her again; in fact I’m dying to see her on stage as soon as possible.  As any person, in any place, doing about almost any thing. Luckily, my own theatrical addiction is strong and all encompassing. We all will get another chance to see this gifted actress on stage as Harper in the National Theatre’s Broadway transfer of the incredible Angels in America. And for that, I am powerless to ignore.