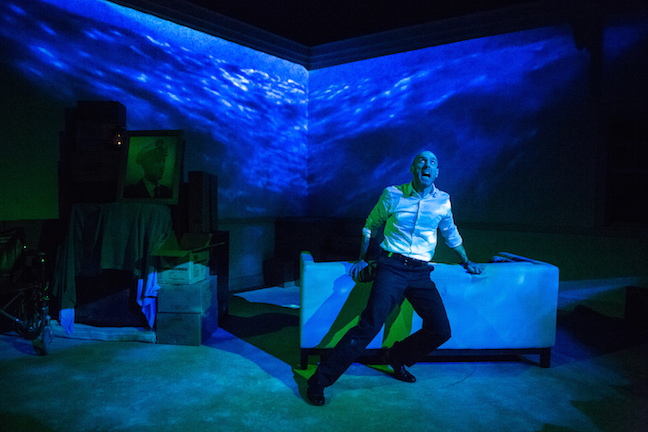 Pericles – Born in a Tempest: Masterfully Surviving a Potential Storm

Pericles – Born in a Tempest: Masterfully Surviving a Potential Storm 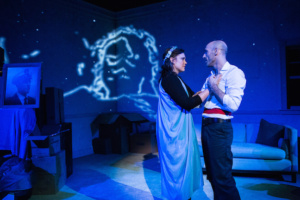 Written at least in part by William Shakespeare and included in most modern editions of his collected works despite questions over its authorship, Hunger & Thirst Theatre in collaboration with The Guerrilla Shakespeare Project (GSP) have taken this engaging story and anchored it into a small cottage; a shelter, basically in a storm. The setting of Pericles – Born in a Tempest in a calm surrounded by storm is an ingenious contraption, enhancing the play in all of its themes surrounding the emotional attachments in family, especially between daughter and son. Thanks to the inventive direction by Jordan Reeves (Founding Member and Artistic Director of GSP), who layers the Shakespearean play, Pericles, Prince of Tyre on to a woman mourning the death of her wheelchair bound father (Jacques Roy). The play sets sail on the evening after the funeral and it is just that kind of family dynamic that is required for this play to float amongst the rocky ideas of loss and attachment. Sheltering themselves in the dead father’s cottage on a stormy dark night, surrounded by his boxed possessions (creatively used as props throughout this telling), the young woman and mother (Patricia Lynn), accompanied by her husband (Jordan Kaplan), their infant child, and two friends (Kathryn Metzger, Tom Schwans) find the notebook text to Pericles – Born in a Tempest. In the light of a storm candle, the husband and friends attempt to sooth the grief of the daughter and their crying baby by reading the story aloud to one another, while the storm rages outside. 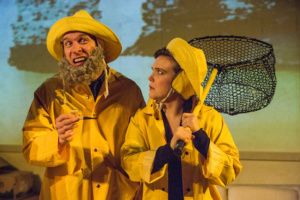 Shakespeare, they believe, didn’t actually write the first two acts of this epic story, but only the last three. Even with this acknowledgement, most believe that Pericles, Prince of Tyre works surprisingly well on stage despite its complexities and inconsistencies throughout. There is a beauty in its depiction of love between partners and parents. Adding to that is the idea that many contest that the play rescues itself with those remaining three acts. Saving itself, like a lifeboat in a raging storm surviving the dullness of the first few acts with the heartfelt loses and reunions later on. Taking that history to heart, director Reeves mostly skips past the somewhat tedious set-up of Pericles’s tale and jumps forward straight into the stormy sea that casts him on the shores of the famine-besieged Tarsus. Roy, the solid actor who wonderfully plays the dying father, smartly also plays the mythical center of this tale, Pericles, with a powerful electric charm. Pushing the myth forward, the complicated and island-hopping tale confidently rides the waves. With a grand and wonderfully created environment to set sail within from set designer, Lynne Porter, lighting designer, Melissa Mizell, sound designer, Randall Benichak, and the most ingenious projections designed by Matt Reeves, the story takes off far beyond the simple reading of the text. It takes us to places and times with an ease and a grin from the loving father of the crying baby, played beautifully by Kaplan, who reads to us and ushers us through the stormy waters to safety. The creative team, the cast, and the director all work wonders balancing the mythical fantasy and the reality of these four mourners with a perfectly timed expertise. 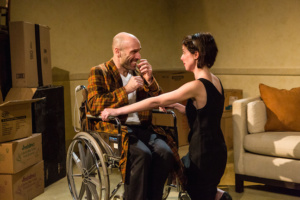 The cast of five jump back and forth between the modern present day moment of four friends communing and lasting out the rainy night, trying to comfort the mourning daughter and agitated baby, to the multitude of characters in the expansive story of Pericles. Tom Schwans and Kathyrn Metzger are particularly adept at the numerous characters they play, having a great deal of fun running from one persona to another. Love, loss, and mourning are the primary themes in Pericles’s journey through life, and connecting that emotional journey to these four with basically the ghost of the dead woman’s father as the fifth player of this crew, pushes the emotional content forward in a touching and creatively accomplished manner. All five do a spectacular job donning numerous hats (clever costume designs by Lea Reeves) and emotional stances. And although many of the scenarios are played a bit too broadly for laughs, the general sentiment is never floating too far away. This is a smart and thoughtful reimagining of the Shakespearean play, one to be enjoyed while the storm of political news swirls around outside of the theatre every day and every night. But uptown, in this far off theatre on W86th Street, we can find safety from the winds and rain outside. Thanks to some inventive direction wonderfully executed by the creative team and cast of Pericles – Born in a Tempest, we are given a solid charmer of a play to wait out that storm joyfully, and hopefully we all will survive.

Robert MassimiJanuary 12, 2022
Read More
Scroll for more
Tap
He Says: The Portuguese Kid It’s Really All About The Greek Bombshell
Incredible Power in The Fight