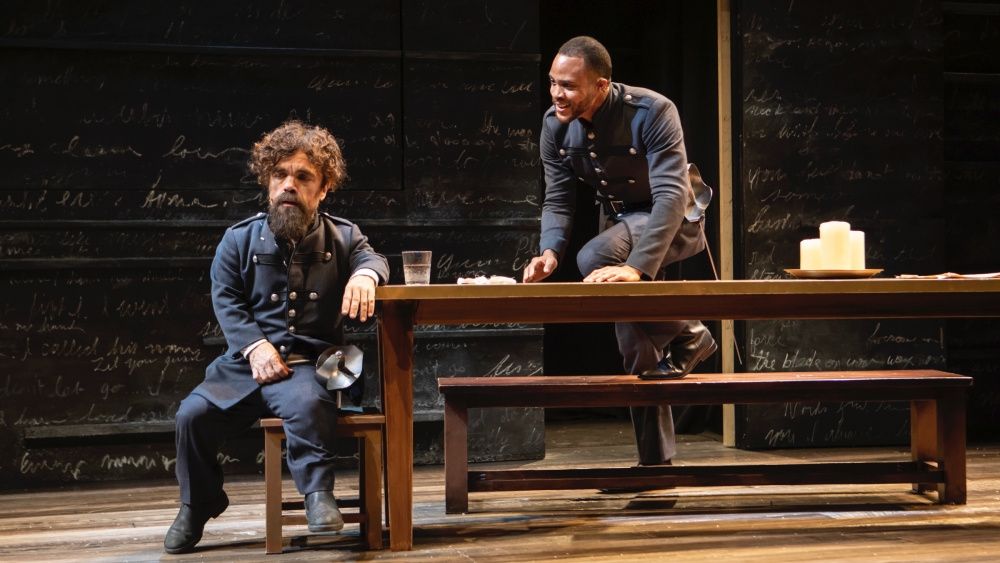 One of my favorite plays is Edmond Rostand’s Cyrano de Bergerac, so when I heard The New Group was doing a new version of it, I was ecstatic. Then the show started and my mouth literally dropped open. Adapter/director Erica Schmidt should never be allowed to adapt a piece like this again. Gone is the nose, deleted is the poetry and what we are left with is a trivial, banal, insipid, three note score by Aaron and Bryce Dessner. Surprisingly to be this bad, it took two to write the music and two to write the uninspiring lyrics.

The plot is simple Cyrano (Peter Dinklage), is a cadet in the French Army. He is strong-willed, a remarkable duelist (performed offstage), a gifted poet who is a wordsmith at the top of his game. He normally expounds about his extremely large nose, (which in this production is blatantly missing). This feature causes him to doubt himself and to expressing his love for his distant cousin, the beautiful and intellectual Roxanne (Jasmine Cephas Jones), as he believes that his ugliness would prevent him from getting the girl he dreams about.

When Christian (Blake Jenner), a handsome new cadet, arrives Roxane falls for him. However she has caught the eye of the most powerful man in town the Count de Guiche (Ritchie Coster). Roxanne longs to be woo’d with words. Christian not the brightest bulb on the tree, allows Cyrano to step in and not only write his words of love, but hidden under the cover of darkness voices the passion Cyrano holds deep inside. When Roxanne marries Christian, the Guiche takes it out on Christian and send him to the front where he is sure to die and does. Cyrano is wounded and it is not until the last moments of his life Roxanne realizes that it was Cyrano all the time who she loved. Pride has kept them from happiness.

Cyrano’s noes, sword fights and poetry, as you can see is essential to the plot, but Ms. Schmidt has stripped the show so bare to allow the lyrics by Matt Berninger and Carin Besser to create an unlyrical, trite, common place world.

The moments that are musicalized are so off, that we get songs expounds from the people in the town or on the war front and not ones that move the plot forward.

When I heard Peter Dinklage was playing Cyrano, I thought this was an interesting choice and I was right. He has a powerful presence, but is not a singer. My heart broke for him because he could have gotten rave reviews had he been allowed to play the role as written. I am sure his “Game of Throwns” fans will still be pleased. Jones, can sing, but act she can not. In the finale scene audience members were laughing at her emoting instead of crying. Who comes across the best is Jenner as Christian. He is beautiful, talented and can sing.

Jeff and Rick Kuperman are given barely anything to choreograph, so when they get the chance it is overblown.

Ms. Schmidt, does make some interesting directorial choices, such as a time lapse during songs. At times this production is rather beautiful, if not bleak to look at, but I wonder if that is the creation of set designer Christine Jones and Amy Rubin.

It seriously boggles my mind that Goodspeed Musicals would commission such a piece and think that it was worthy of an audience. Is the playwright no longer considered after they die? First we had Ivo von Hove’s decimation of The Crucible (another favorite play) and now Cyrano. I could understand if Ms. Schmidt had said inspired by, but she said adapted. This wasn’t adapted it was extinguished. Semantics I know, but after all this show was once upon a time all about language.

Cyrano: Presented by A New Group and Goodspeed Musicals at the Daryl Roth Theater, 101 E 15th St., until Dec. 6th

Suzanna BowlingMay 17, 2022
Read More
Scroll for more
Tap
He Says: For Colored Girls…And Everyone Else at The Public
Nice and Shiny: Ryan McCartan is a Star on the Rise