As hurricane Florence threatens to take out the Carolina’s, Prospect Theater Company presented a concert production of Peter Mills and Cara Reichel’s new original musical The Flood. Inspired by the historic 1993 flooding of the Mississippi River, this special evening, which was held on September 8th was to benefit hurricane-affected communities in Puerto Rico (visit www.ProspectTheater.org to donate). A cast of Broadway and Prospect stars were joined by a chorus of more than 30 singers from Monroe County, Illinois — the community which survived the devastation of the Great Flood of ’93 and whose stories inspired the musical. The evening was heartbreaking watching these survivors sing along to the terrific score with tears streaming down their faces. Though that flood happened 25 years ago, it still has an emotional toll. 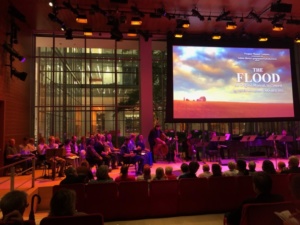 The play is based on what happened in the summer of 1993, in the town of Valmeyer, Illinois. The town was devastated when the levees broke and the Mississippi river overtook the town. The Flood fictionalizes this tale, naming the town of Meyerville. 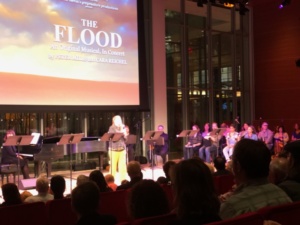 We first meet the River (Simone Zamore) who sings a haunting serenade to a 15 year-old named Rosemary (Aline Mayagoitia). The two have a special bond. As the town comes into play we meet Susan (Victoria Huston-Elem) the school teacher, her students and young lovers Raleigh (Ben Fankhauser) and Alice (Mia Pinero), her pastor father Ezekial (Aaron Ramey) and his father the Mayor (Scott Wakefield) and Susan’s longtime boyfriend Curtis (Graham Stevens). Rosemary is Alice’s sister. As summer begins, the town has received a record rainfall and the Mississippi River is bulging at the seams. Raleigh is desperate to escape small town life, the pastor thinks God is about to throw down his wrath, Alice doesn’t want to commit to Curtis and Susan is trying to figure out her relationship with Raleigh. She thinks he is saving to buy her a ring, when in truth he wants to buy a car to escape. When the flood does happen, lives are lost, the town has to rebuild on higher ground and no-one will be the same again. 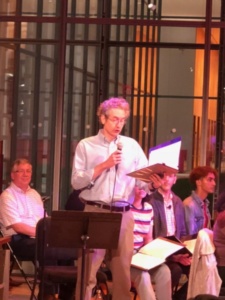 Simone Zamore as the river, brought sorrow, longing, and a gracefulness as she embodied the mighty Mississippi. Ben Fankhauser’s made the wonderfully written “Highway Miles” a distinct want song, that was universal to anyone who wants more, than a small town life. Aaron Ramey’s rich bass made the preachers songs “Pass it On” and “One Man With a Shovel” stand out. I really liked Graham Stevens’s gentleness. Victoria Huston-Elem, had a nice tone, but didn’t quite deliver my favorite song from the piece, the poetic and lyrical “It’s Amazing The Things That Float” and unfortunately made us not care for her character, but maybe that is a flaw in the show. Who wow’d us was the incredible Mia Pinero, who not only brought a wonderful voice to the stage, but could act and clearly had the “it” factor. I expect big things for this talented youngster.

The music and lyrics are lyrical, clever and dynamic, they sweep you away with their melodies. The sound is a blend of country, jazz, blues and musical theatre all blended together. A stand out was the lively “Hell, We’re Americans.”Where the show needs work, is in the book, but I wish these two would work on this as the show is timely and could help heal those who have gone through this kind of hell.

Reichal’s direction kept the show moving. The lighting and the costumes were simple, but effective.

The Flood, was moving, profound and unfortunately timely. As the members of Valmeyer, Illinois shed tears, I couldn’t help but think how many will soon know this devastation and will they be able to cope as well as this town and it’s inhabitants did? I sent up prayers.