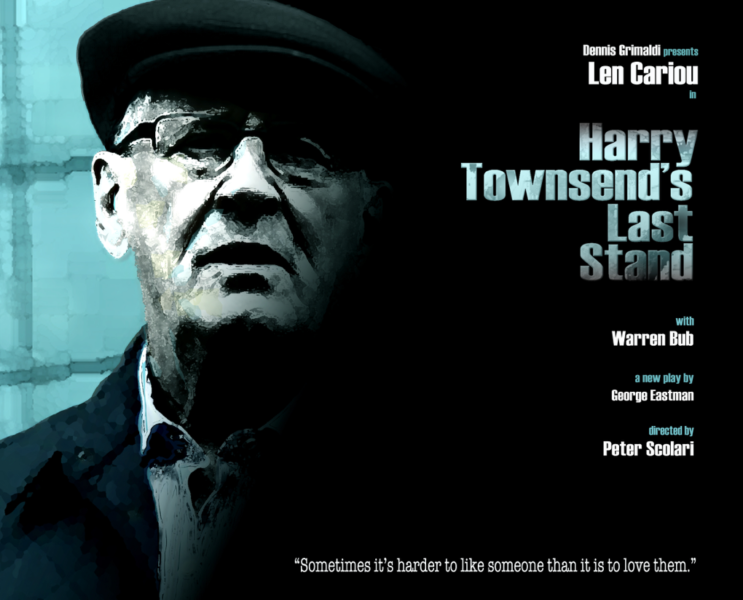 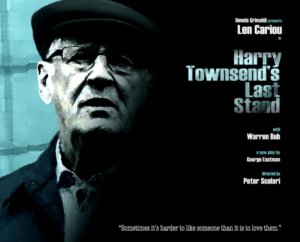 Dennis Grimaldi will present Tony®Award-winner Len Cariou (Sweeney Todd) in two staged readings of Harry Townsend’s Last Stand, a new play by George Eastman.  Directed by two-time Emmy®Award-winner Peter Scolari (Wicked, Newhart) and featuring Warren Bub (“Gotham”), the readings will be held on Monday, May 21 and Tuesday, May 22 at 3pm at Nola Studios (250 West 54th Street – 10th Floor/Studio 1). The readings are for industry only and reservations may be made at LastStand@theatrical.AG.

Harry Townsend’s Last Stand centers around eighty-five-year-old Harry Townsend who lives alone in his home in Vermont. While he still possesses the sharpness of the mind, he is being betrayed by his aging body that is becoming more and more fragile every day. The one happiness in his life is his son Alan, who is finally coming home after an 18-month absence. Yet Alan’s return is in accompanied by an unpleasant agenda that puts the aging father and his concerned son at odds with each other as Harry’s living in the house becomes not just a question of solitude, but one of safety as well. The play reflects on the ideas of what it feels like to grow old and learning to let go off the past in order to enjoy the rest of the remaining future.

Len Cariou (Harry Townsend) is The Tony Award-winning veteran of the stage and screen with a career lasting more than five decades. Cariou made his Broadway debut in The House of Atreus, and starred in Henry V. Two years later, Cariou landed his first starring role opposite Lauren Bacall in Applause, a musical adaptation of the film All About Eve, which earned him a Tony Award nomination as Best Actor in a Musical and won him the Theatre World Award. In 1973 he garnered his second Tony nod for Stephen Sondheim and Hugh Wheeler’s musical A Little Night Music; he repeated the role of Fredrik for the 1977 film version opposite Elizabeth Taylor. Six years later he won both the Tony and a Drama Desk Award for his portrayal of the title character in Sweeney Todd: The Demon Barber of Fleet Street, another Stephen Sondheim musical in which he starred opposite Angela Lansbury. His other stage projects included the Alan Jay Lerner–Charles Strouse musical Dance Little a Little Closer, Arthur Miller’s sole musical Up From The Paradise, Night Watch, Cold Storage, The Speed of Darkness, Neil Simon’s The Dinner Party(with Henry Winkler and John Ritter) and Proof(with Anne Heche and Neil Patrick Harris). He worked as a director for Don’t Call Backon Broadway.  His off-Broadway appearances include Master Class, Papa (Ernest Hemingway one man show) and Mountain(Justice William O. Douglas). On the small screen, he is known for his role as Harry Regan, The Police Patriarch of The Regan Clan on hit CBS television series “Blue Bloods,” as well as appearing in multiple episodes of the popular television mystery series “Murder She Wrote,” where he united with Angela Lansbury. Cariou’s film credits include Flags of Our Fathers, About Schmidt, Thirteen Days, The Four Seasons, Secret Windowin which he starred alongside Johnny Depp, and the Academy Award winner for Best Picture Spotlight. Cariou portrayed Franklin D. Roosevelt in the HBO movie “Into the Storm,” earning an Emmy nomination for Outstanding Supporting Actor in a Miniseries or a Movie.

Warren Bub (Alan Townsend) is best known for his recurring role of Dave Metzger on the Fox hit show – “Gotham.” His other television appearances include HBO’s mini- series “Show Me a Hero,” CBS’s “Bull” and “Limitless,” as well as the multi award-winning Netflix’s blockbuster “Orange is The New Black.” His film credits include award-winning Patti Cake$(Sundance Film Festival and the Cannes Film Festival), which has also been nominated for the Spirit Award for “Best Picture.” Bub co-starred with Ralph Macchio in Lost Cat Coronaand starred in American Fango, a Gabrielle Altobelli’s recipient of multiple international awards. For the New York Theatre – he just completed the workshop for a musical Stonewall, A Rhapsody on Resistance, directed by Karen Carpenter and The Renegade Theatre production of Lovers and Other Strangers, directed by Steven Van Zandt. Warren also starred in multiple roles in The Off-Broadway phenomenon My Big Gay Italian Wedding, directed by Anthony Wilkinson and in the Tennessee Williams’ musical comedy The Mutilated(Drama League Award Nomination). www.warrenbub.com

George Eastman (Playwright) decided to become a writer after seeing two of his uncle’s plays on Broadway, author Carroll Moore (Make a Millionand Send Me No Flowers). His first full-length play The Snow Job, was published by Samuel French and has been produced by several theaters throughout the country. His following play Bitter Exchange, won performance at the New Works Play Festival in Pittsburgh.  When Eastman retired after four decades of teaching French to fidgety eighth-graders, he used his restored energy to write his first novel The Penelope Peters Effect. After winning several short fiction contests in Western Massachusetts, his wife suggested that he turn one of short stories, “Harry Townsend’s Last Stand” into a play. It was given a staged reading by the American Theatre Group and starred Len Cariou and Warren Bub and was directed by Dennis Grimaldi. An earlier draft of the play, entitled Happy Hourwas produced at the Coachella Valley Repertory Theatre with Gavin Macleod in the lead role. He is currently working on the re-writes for three other full-length plays: Last Call, Molly and Max, and Creatures of Comfort. Mr. Eastman lives on Cape Cod with his wife Susan.

Peter Scolari (Director) is an Emmy Award actor, known to television audiences for co-starring with then-unknown Tom Hanks in the cult sitcom “Bosom Buddies.” His numerous television appearances that followed included: “Touched by An Angel,” “Ally McBeal,” “Reba,” “The King of Queens,” “ER,” “The West Wing.” Scolari joined the cast of “Newhart”, opposite Bob Newhart, where he played one of his best-known roles, Michael Harris, the yuppie local TV producer, until the series’ conclusion. His more recent central roles in other TV series including “Gotham,” as Commissioner Gillian B. Loeb, “Family Album” and “Dweebs.” Scolari spent three seasons playing inventor Wayne Szalinski, a role originated on screen by Rick Moranis, in the TV adaptation of the Disney film Honey, I Shrunk the Kids. He starred as Peter Madoff in the television drama “Madoff” and later had a recurring role as the father of Lena Dunham’s character on HBO’s “Girls.” On stage, he appeared in a version of the stage musical Stop The World, I Want To Get Off, produced for the A&E television network. Scolari has appeared on Broadway in Wickedas The Wizard; Sly Fox, Hairsprayand Lucky Guy, which reunited him with Tom Hanks. Scolari also appeared Off Broadway in Old Man Joseph and His Family, The Exonerated, In the Wings and White’s Liesand portrayed Yogi Berra in Bronx Bombers.