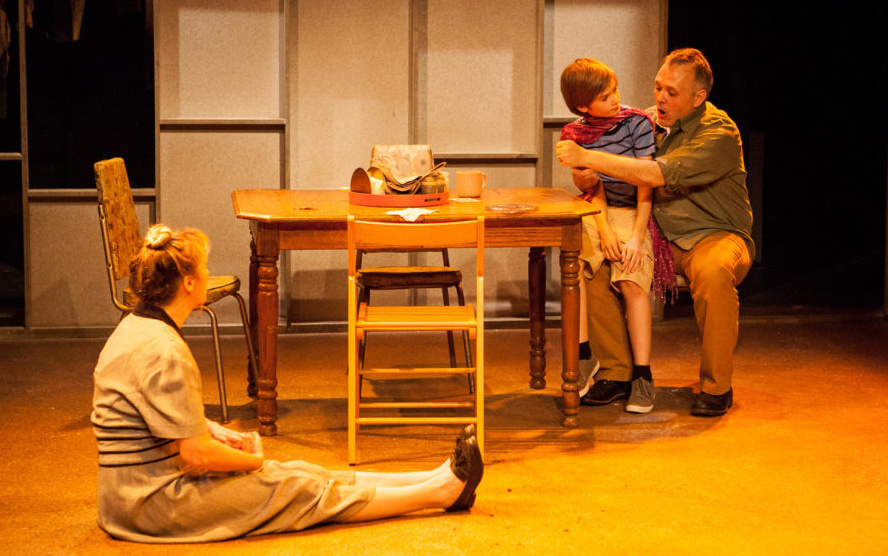 Theatre East’s world premiere of Petie, written by Lori Fischer, is a touching, heavy piece about overcoming loss and estrangement. The production, both technically tight and compelling, feels like a cross between Rabbit Hole and The Beauty Queen of Leenane.

Following the death of her son Petie (Grayson Taylor), Bonnie (Lori Fischer) seeks comfort in radio sermons and magazines. She leaves the outside world to her daughter Jesse (Arielle Goldman), who copes with her guilt and depression while watching her friend KM (Emily Verla) get into a dangerous relationship with Rick (Zachary Clark). Bonnie and Jesse constantly struggle to communicate and to relate to each other. As the 10 year anniversary of Petie’s death draws near, Jesse seeks information that Bonnie refuses to give and the tension between them reaches a new level. While Bonnie replays memories and details of the days leading up to Petie’s death, Daddy (Judson Jones) is ever present in Bonnie’s mind. 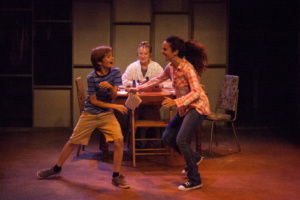 Steven Brenman’s symbolically unfinished scenic design reflects the sense of loss and incompleteness in the characters. While the set decoration of the kitchen is minimal, the choice to place Daddy’s fishing boat inside the house is strong. Even stronger is Martha Banta’s direction to have Daddy (Judson Jones) sit inside that boat, presumably representing how he continues to affect Bonnie’s and Jesse’s lives.

The lighting design by Zach Murphy creates deliberate shifts in mood from the present to the past. Martha Banta’s organic direction draws us into these characters’ lives with the simple movement of everyday life. Lori Fischer has not written a single superfluous word or action into Petie, which makes the course of the piece clear. The actors deliver a realistic performance with the exception of a few unbelievable moments.

The primary achievement lies with the actors. For me, the characters presented in this story are unlike-able, and somehow I still felt sorry for them. I was invested in what happens to them. As Bonnie, Lori Fischer’s phone calls are particularly entertaining and revealing, and her ability to live in a memory while showing us how the present Bonnie feels about the memory is particularly touching. Judson Jones’ portrayal of Daddy is moving and disturbing; Zachary Clark as Rick, the abusive boyfriend, is equally bothersome. Arielle Goldman and Emily Vera give a realistic picture of two friends, very different from each other, but who are struggling in the same world. Goldman gives Jesse a gloom that lingers onstage in high contrast to her playful demeanor when engaged with Grayson Taylor, as Petie, who is talented and adorable.

Theatre East produces a heart-rending performance of a complex story that gives life to and is complimented by the theatrical design. 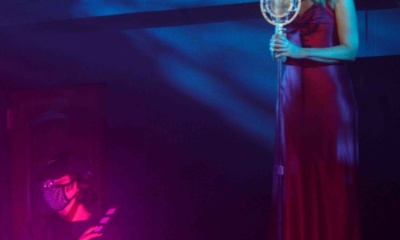 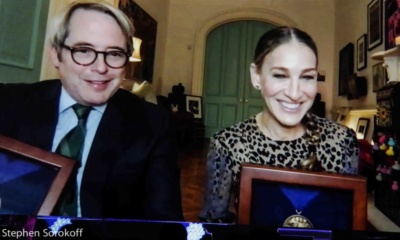 Stephen SorokoffSeptember 21, 2020
Read More
Scroll for more
Tap
The Stars Come Out For Rose: Kate Hudson, Uma Thurman, Fergie and More
A Fool’s Game, Yet Another Show About The Life In The Theatre