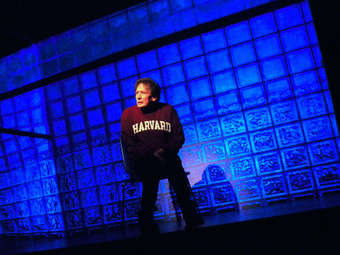 A few years ago without a doubt my least favorite show was Digital Dilemma. My guest and I, who I take to the theatre a lot, compare everything to this show. I now have seen a show that is worse than Digital Dilemma and it is Steven Friedman’s, Phalaris’s Bull: Solving the Riddle of the Great Big World. This one-man show is written and performed by the narcissistic Friedman who can neither act, nor mime the direction he has been given by David Schweizer. I actually pity this director who must have been pulling his hair out. With grandiose gestures and condescending vocals, this is a vanity piece about this ignoramus’s life. I know this sounds harsh, but even in his bio he comes off as a braggart. Sitting through this piece was my idea of 80 minutes, that seem like an eternity of hell.

Mr. Friedman who quote on quote calls himself a genius is a horrible poet as he sprouts his inane verse. He also thinks he’s an artist but it is rather amaturish. His philosophy is jammed down our throats and I do not think the same way this “Buddhist” thinks.

Not the most interesting or handsome face, we see it blown up ten times larger than life. If that weren’t bad enough we get subjected to public hairs for no reason.

Friedman, is a molecular biologist whose  intermissionless monologue is a bore. What was so annoying is in the first five minutes, he flips a coin to tells us that tails the show is over. I was thrilled, because that’s how long it took to discover how God forsaken this was going to be, but that was a hoax. Please tell me when did  personal therapy become theatre, because it is not.

The only bright spot was the projections by Driscoll Otto and the scenic design by Calab Wertenbaker, who deserved a better actor and script.