Pillars of New York Has No Foundation

Pillars of New York Has No Foundation 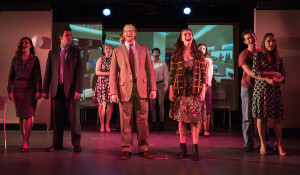 Producing a show is expensive. There are so many writers who spend their life leaning their craft and perfecting the shows they envision. Sadly Michael Antin has not done this and it shows. He is the book, lyric and music writer for the new show Pillars of New York, now playing at St Lukes. He is also a lawyer who has written books on taxes not theatre. As boring as taxes sound to a musical theatre person, is as boring and unconstructed Mr. Antin’s work in musical theatre is. His music is tuneless, goes off in obtuse ways, that are annoying to the ear. His lyrics so poorly layered that they seem mindless and his book is a pathetically writen version of a small section of victims who lost their lives on 9/11. How could Mr. Antin know how these people felt? He is from California and does not understand a New Yorkers mentality. I can say this having been born and raised in California. It is such a different mindset and language. For two intermission less hours and 17 mind numbing songs the audience is entrapped into this tedious boredom.

Anton’s lead, is a laid back, egocentric, self-serving  therapist and writer Jake Kelly (Brandon Schraml). Prior to the events of 9/11, he has been in the throws of writing a book about what a  wonderful therapist he is using the case histories of his patients. By the way Mr Antin’s writing pseudonym is Jake Kelly. His first client, is a Jewish mother Rachel (Audrey Federici) who’s son Alex (Tyler Knauf) is gay. Marty (Jack Strata) is married to Carrie (April Leonard), but having an affair with Jake’s assistant Wendy (Georgia Sackler). Bianca (Laura Kaldis) thought she couldn’t get pregnant and much to the surprise of her writer husband Davis (Max Meyers) she is and he is not exactly thrilled. Victor (Alex Lamb) is worried his  finances as his wife Harley (Nikki Casseri) seems oblivious. After 9/11 some patients live and some are tragically killed as Kelly attempts and succeeds to still use his patients.

Projected images of 9/11 hit home and make this show even harder to take for the selfishness of it all. Not only is Jack Kelly shown as a narcissist, but Mr. Antin comes off just as badly for writing this dreadful piece, of what I am suppose to consider theatre. Ironically Mr. Antin’s bio was missing from the program. Director and dramaturg Jim Blanchette, is so egotistical that his bio is a page and a half. Sadly his direction does not help this puffed up piece of banal work. As for the actors they are all non union and it shows, but April Leonard makes the most of bad material and manages not to go sharp or flat.

Why producer John Lant decided to produce this is the most puzzling of all. Maybe Mr. Antin does his taxes or maybe their lovers, but I can almost guarantee not one critic will find anything about this show appealing.