Please Bring The Encores! Off-Center Production of Songs For A New World To Broadway

Please Bring The Encores! Off-Center Production of Songs For A New World To Broadway

“It’s about one moment. It’s about hitting the wall and having to make a choice, or take a stand, or turn around and go back.” Jason Robert Brown 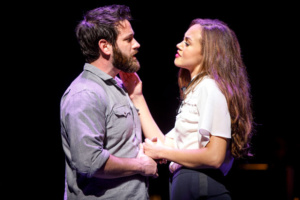 Encores! Off-Center kicks off its 2018 summer season with Jason Robert Brown’s Songs for a New World under the direction of Kate Whoriskey, with music direction by Tom Murray and choreography by Rennie Harris and they couldn’t have picked a better choice. This show was musical nirvana. I wish, I had been at the first performance, so I could have sent ever producer I know in town to see this brilliantly conceived and slightly updated version, because it is spectacular. Each song is a playlet in which the characters move through time and space to make a choice that defines what happens next. In a strange way two songs seem out of place. “The Flagmaker 1775” and “Christmas Lullaby” chronologically should be after “On the Deck of a Spanish Sailing Ship, 1492′, right in the beginning, but seriously that is just being picky. 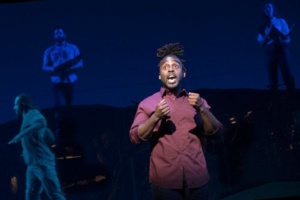 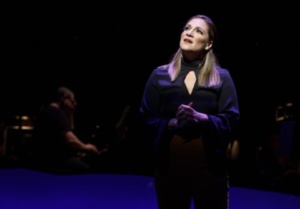 Shoshana is the comedic diva with “Just One Step” about a Jewish wife who is trying to get her husbands attention. The overly done “Stars and the Moon”, she makes her own, “Surabaya-Santa”, the Kurt Weill parody where Mrs Claus sings about her neglectful husband. Are you starting to get the theme of this character? “The Flagmaker, 1775”, sews a flag to keep her hope alive, as her husband and son are fighting in the Revolutionary War. Donnell is the man who either loses his power, can not commit and then finally sees the errors of his ways. Pfeiffer is the soprano, who longs for more. I am so glad New York has caught on to how fabulous this girl is. I knew it when a friend sent me a rehearsal tape of West Side Story at the Hollywood Bowl. Kilgore knocks every song he sings out of the park, especially “Flying Home”to which a standing ovation and ten minute applause followed. I also like his jumping split that was rather astounding.

What makes this production even more spectacular is the expanded orchestrations and backup dancers who give the songs and the show a new feel. Phil S. Cutting Jr.’s moves were mesmerizing.

For those who don’t know the timeline of  Songs for a New World, Brown met Daisy Prince (daughter of Hal Prince) and with her guidance the show was originally produced Off-Broadway at the WPA Theatre in 1995. Ahead of it’s time the show played a respectable 3 1/2 week run. Thankfully to Daisy’s parents and album was made and reached cult status in the musical theatre world. 23 years later those of us who fell in love with this show finally are getting to see this show the way we say it in our heads.

Without the influence of Jason Robert Brown’s music, theatre may not have had a Lin Manuel Miranda or a Pasek and Paul.

To the producers out there, move this show. First the audience was diverse and was for the most part around 30. Second the applause before and after each song was deafening. I haven’t seen this kind of enthusiasm for a show since Dear Evan Hanson at Second Stage. This could win Best New Musical, since it only had that pretty much non existent off Broadway run. It would definitely win Best New Score and Orchestrations.

I can not wait to attend Gone Missing July 11 and 12th after hearing a snippet of the music and lyrics by the late and wonderful Michael Friedman (Bloody Bloody Andrew Jackson).

Performances for Songs for a New World were June 27th through June 30th.

Suzanna BowlingApril 20, 2021
Read More
Scroll for more
Tap
Spencer Day a Singer/Songwriter You Should Have On Your Radar
First Love at 60?