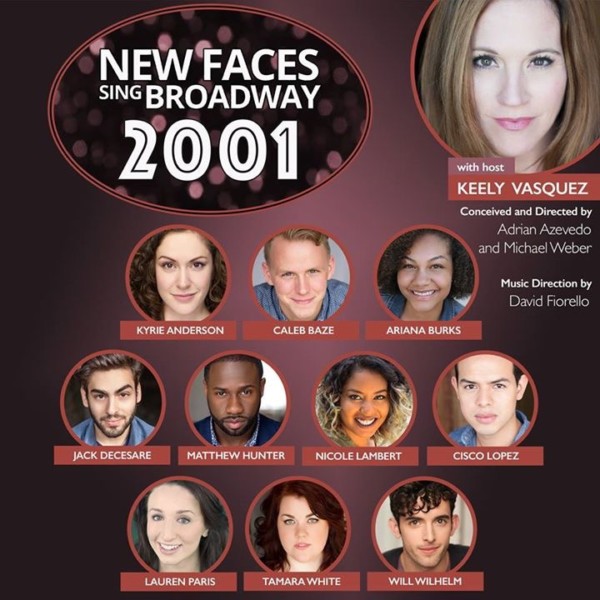 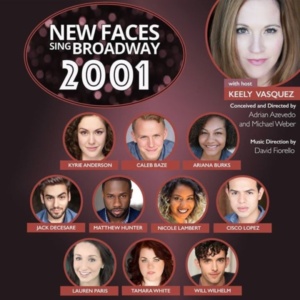 The concept was delightfully novel. Take about a dozen of the freshest faces and emerging talents on the Windy City musical theater scene and have them revisit the entire 2001 Broadway season songbook in concert. A very chilly night was quickly thawed by the hot and lively performances by all involved. Blending a little trivia, a few audience sing-a-longs and a round of cocktails from the full service bar at the Uptown Underground, Porchlight Musical Theatre continued its winning streak. After back-to-back commercial hits, remounting In The Heights and End of the Rainbow, and a stunning presentation of Side Show last season, Porchlight has established itself as a true artist’s company. Conceived and Directed by Adrian Azevedo and Michael Weber with fantastic Music Direction by David Fiorello, this Cabaret concept was the hit of the week. 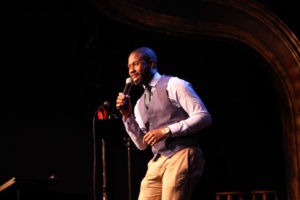 The evening began with self proclaimed “old face” and mistress of ceremonies for the evening, Keely Vasquez, performing the New Faces parody “Opening Night.” She recently played the mother in Porchlight’s In The Heights, but with her hair down and hemline short, she appeared more like the younger sister than anyone’s mother. Sharing amusing particulars while introducing each show, Vasquez kept the pace light and jovial. Up first, a tribute to the show Seussical the Musical, a complex amalgamation of many of Dr. Seuss’s most popular books.  Playwrights Stephen Flaherty and Lynn Ahrens wove a tapestry interlinking the popular characters Cat in the Hat, Horton, the Whos, and Mayzie La Bird. Pint-sized singing sensation Ariana Burks entertained with “Alone in the Universe” while Nicole Lambert  & Tamara White hammed it up during “Amayzing Mayzie” with feather boas draped over shoulder.  While Suessical was a hit that year, the next show featured was decidedly not. Jane Eyre the Musical brought Charlotte Bronte’s most popular character to life in a musical drama that played just 36 previews and 209 performances. While this show struggled to find an audience, for one night “Sirens” was lovingly revisited by Lauren Paris  & Matthew Hunter. 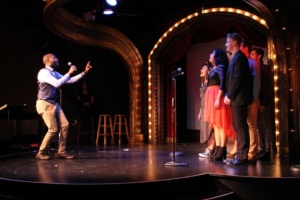 When it comes to hits, Mamma Mia the musical has been viewed by over 60 million people and has grossed over $2 billion dollars worldwide. Who would have guessed this jukebox musical, which debuted October 18, 2001 at the  Winter Garden Theatre, would still be playing around the globe today?  Mamma Mia shared the distinction of opening a little over a month after the September 11 tragedy, and in that opening night audience, actress Meryl Streep, who would play the role of Donna in the film over a decade later. But for tonight, it was Keely & the girls who were the popular  “Dancing Queens” leading an audience sing-a-long to ABBA’s most famous songbook. While we are discussing hits, 2001’s Hamilton was most definitely The Producers,  Mel Brooks 12 time Tony Award-winning musical, starring Nathan Lane and Matthew Broderick as Max Bialystock  and Leo Bloom.  Stepping in for the night, the hysterical Francisco Lopez and Jack Decesare to the tune  “We Can Do It.”  Not to be outdone, Tamara White returned to the stage, a vamp in a red dress, titillating to the tune, “When You Got It, Flaunt It.” This brunette bombshell made Ulla Inga Hansen Bensen Yansen Tallen Hallen Svaden Swanson thoroughly her own. 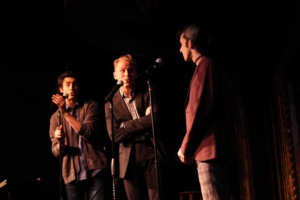 I have had the distinct pleasure to witness Kyrie Anderson in multiple productions around the city. Tonight, she wrapped her talented vocal prowess around “The Next Best Thing to Love” from A Class Act. While this show itself focused on heavy subject matter, the life of writer-composer-lyricist Edward Kleban, both Anderson and Jack Decesare kept it light for “Paris Through the Window.” Largely regarded as Andrew Lloyd Webber only real flop, By Jeeves was acknowledged next with  “That Was Nearly Us” a comical duet by Tamara White & Caleb Baze. Wrapping this set, another underperforming show, The Adventures of Tom Sawyer, closed after only 34 previews and 21 performances, but the engaging Will Wilhelm brought new life to “It Just Ain’t Me” and “Light.” 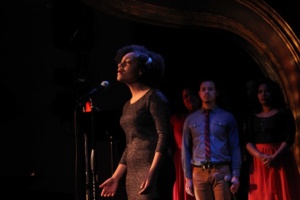 When it comes to Broadway writers, Stephen Sondheim &  Jule Styne are absolute tops at their craft. Hewing a fantastic mash-up of “Losing My Mind/The Party’s Over” from Follies & the Faith Prince starring vehicle Bells Are Ringing,  Keely Vasquez and Kyrie Anderson’s powerful duet did more for female empowerment in five minutes than a decade of Spice Girls hits. With tongue firmly planted in cheek, the boys took the stage next for a comical 30 seconds of bump and grind before Caleb, Will, Jack stepped forward to render the audience speechless with powerful renditions of “Man” and “Big Ass Rock” from Terrance McNally’s The Full Monty. While it is doubtful any of this trio were alive when this show about six unemployed Buffalo steelworkers initially won a Drama Desk Award, these three should be eyeballing some mantel space themselves for the inevitable prizes they will each be collecting in the not so distant future.

Wrapping up the cabaret, selections from the satirical musical comedy Urinetown, which will be remounted in February here in Chicago. Lauren returned to leave the audience in stitches with “It’s a Privilege to Pee”  while Ariana, who is in the cast of the restaging of Urinetown, serenaded the captivated audience with “Tell Her I Love Her.” Taking us to Church, so to speak, Matthew Hunter and Company concluded the evening with a raucous rendition of “Run Freedom, Run.”  Returning to the stage, Keely introduced the final song of the night, an audience sing-a-long, and dance-a-long to Rocky Horror Picture Show’s “Time Warp.” While we were all taking a “jump to the left” this kicky crew was paying homage to the sexy, science fiction, B movies tribute, Theatre World Award-winning musical.

Mixing a young crew of future Chenoweth’s, Ashford’s, LuPone’s, Miranda’s, and Menzel’s, with copious songs from the scores of hits and misses from Broadway’s 2001 season, Porchlight Theatre presented a winning evening of refreshing cabaret. Selecting up and coming talent from a wide range of shows and allowing members of the chorus to step center stage, proved a sensational and charming night out.  Loosely structured but swift in pace, my only legitimate criticism is the limited opportunity to check this out.  One and done, but did we have fun.