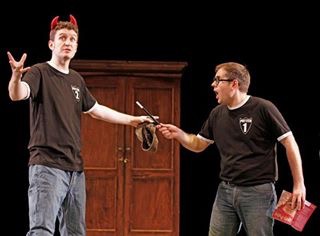 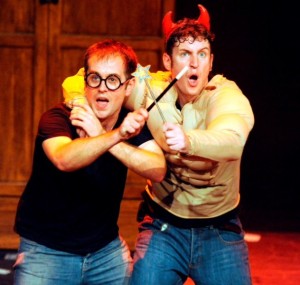 Wildly imaginative and completely grin inducing, Potted Potter: The Unauthorized Harry Experience  is a knee slapping farce aimed at paying tribute to the entire Harry Potter series of books, played out in a swift 70 minutes. Written and performed by the eccentric British comic duo, Daniel Clarkson and Jefferson Turner, Potter is a madcap love letter of all things Harry. No small task, simultaneously combining and celebrating the lexicon of Harry Potter novels, reduced to a series of physical comedy bits, wigs and accent changes resulting in flat out, outrageous hysteria. It would be impossible to hit the over 300 characters who populated the wonderful wizard’s world, but Dan and Jeff give it a hearty go, with uproariously delightful results. From Ron “I’m a ginger ninja” Weasley and Hermione Granger to the Nimbus 2000 vacuum instead of a crooked broom, all the main cast are lovingly parodied. “We couldn’t get Darren Criss” the actors jest while they run, tumble, somersault, cartwheel and frolic all over the minimalist set, with a captivated audience enthralled by the proceedings. 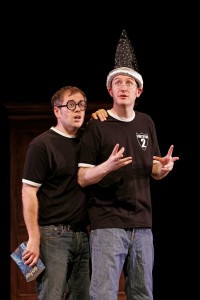 I must be completely honest, I have never personally read any of the Harry Potter books or sat through any of the films in their entirety.  When I lunched with friends and told them I was reviewing this show, I was met with a couple eye rolls and several snickers.  While I am not the “on paper” primary demographic of this show, I was still regaled.  Clearly aimed at a younger audience, there is something here to tickle the funny bone of every viewer.  With tongue in cheek nods to Annie, Frozen, Wicked, Rocky, Scooby-Doo and The Lion King, Potted quickly grows on you. Surely the site gag of the 50 Shade of Grey book and costuming jokes including “looks like Bob the builder had a night out in Boystown” were not included in the mix for the under 10 set.  And speaking of the kiddos, I had the good fortune to be seated next to 10 year old Elizabeth, a Harry Potter aficionado, who shared with me she had read all the books in less than 2 years and who was lucky enough to be subsequently pulled on stage to participate in the live action game of Quidditch. Little Liz was indeed the one to capture the golden snitch and thoroughly relished being an active participant in the Hogwart’s magic. 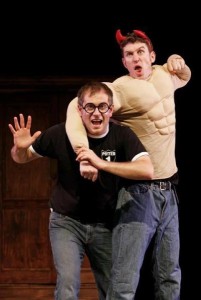 Whether you are an expert or a novice, an Amortentia or a Dumbledore, this whimsical romp, inspired by J.K. Rowling’s cash cow, will delight.  Ending with a disco tribute to the adventures of the young wizard and his friends to the tune of “I Will Survive” proved Potted a silly delight from beginning to end.  Wicked or The Lion King this is not, but it doesn’t aspire to be.  The infectious hilarity on stage captured even the most cynical viewer’s heart.  You will willingly surrender to this appealing dynamic duo’s bewitching magic. Witty, affable and likable from beginning to end, fall under the enchanted spell of Potted Potter: The Unauthorized Harry Experience while you still can. 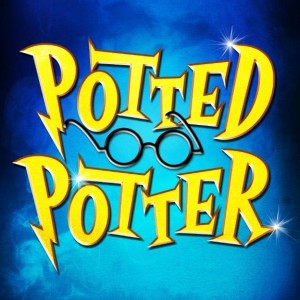 Potted Potter: The Unauthorized Harry Experience  is now playing at the Broadway Playhouse through January 10, 2016