Prayer for the French Republic or Will Hate Ever End Prayer for the French Republic or Will Hate Ever End

“Are we safe?” When will hatred end? For that matter fear? This seems to be a theme in this seasons plays and Prayer for the French Republic says this in spades. The story of hatred begins in 1944 as Irma (Nancy Robinette) and Adolphe (Kenneth Tigar) Salomon a Jewish family in France await news of their missing family. Desperate for information the elder couple ponder the question if they are safe anywhere. 70 years and five generations later, the family is still pondering the same question. Josh Harmon’s (Bad Jews, Significant Other) three hour drama, now playing at New York City Center uses Patrick Salomon (Richard Topol) as our narrator, as he leads us through to this generation of his family and why things will eventually happen. His sister Marcelle (Betsy Aidem), has just welcomed an American cousin Molly (Molly Ranson), when her husband Charles Benhamou (Jeff Seymour), comes through the door with their son Daniel (Yair Ben-Dor), who has been beaten up for a second time. Daniel, has embraced his religion and started wearing a yamaka. Fear is struck in Charles whose family emigrated from Algeria, when his country was no longer safe for Jews. France is becoming increasingly frightening to Charles, who now wants to move the family to Israel. 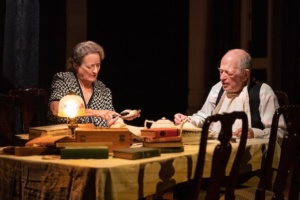 Now we meet the original Salomon’s who built and sell grand piano’s. It is one of their piano’s that haunts the stage. They have been kept alive because they were old. As they hide out in their apartment trying to survive the war, their table is overfilled with paper work. When the war ends their son Lucian (Ari Brand) and their grandson, Pierre (tenderly and hauntingly portrayed by Peyton Lusk) find croissants bind them. It is the grandson who is the generational link that ties these characters together. Back to the present, Daniel is starting to fall for Molly, Marcelle sends her bipolar daughter Elodie (a fiery and fantastic Francis Benhamou) to stop the budding romance. However Elodie is depressed and full of passionate rage that push all the families buttons. 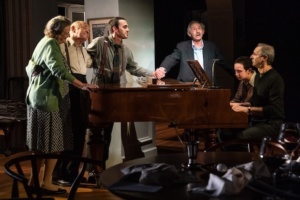 As anti-Semitic hate crimes escalate in France, Marcelle who was vehemently opposes to moving to Israel is starting to warm to the idea. As time passes we find out that Molly (Molly Ranson), is alive only because her ancestors emigrated to America.

Trump’s Presidency and the running of Marine Le Pen are blamed for the trauma this family is now going through. Molly is lectured about her being an American and not really knowing what is going on. The differences of being a Jew in Europe, as opposed to being a Jew in America are debated. This is the one place where the play gets truly heated and comes off as another play.

At Thanksgiving due to death of a women in her own apartment the Benhamou’s have decided they are moving to Israel. When they tell Patrick, he tells his sister they are not that religious, are only half Jewish and not the right part. He tells her to hide her religion as she is half Catholic anyway. He sees his family and himself as safe because he hides who he truly is.

When the Benhamou’s tell the elder Pierre (Jeff Seymour) they are moving he tells them to go. When Daniel says he now wants to stay, he tells him to also go and be safe. This confuses Patrick who breaks it off with his sister.

The cast is flawless, but this really is Marcelle’s play as she navigates how to keep herself and her family safe despite what she has to give up.

David Cromer, directs this powerful, sweeping drama with a natural feel that makes you feel apart of this. Three hours go by, as you become haunted by the continuance of hate.

The set designed by scenic designer Takeshi Kata, the costuming by Sarah Lauxand  simplistic lighting by Amith Chandrashaker, the sound by Lee Kinney and composer Daniel Kluger all add to the emotional roller coaster this play takes us on.

Patrick in the end wants the audience to understand the break-up of losing his sister and the journey his family has been on. This is a flight or fight story of survival and it will break your heart, but in the end Marcelle is a piece of him and he her.

This is a must see play that will have your heart.