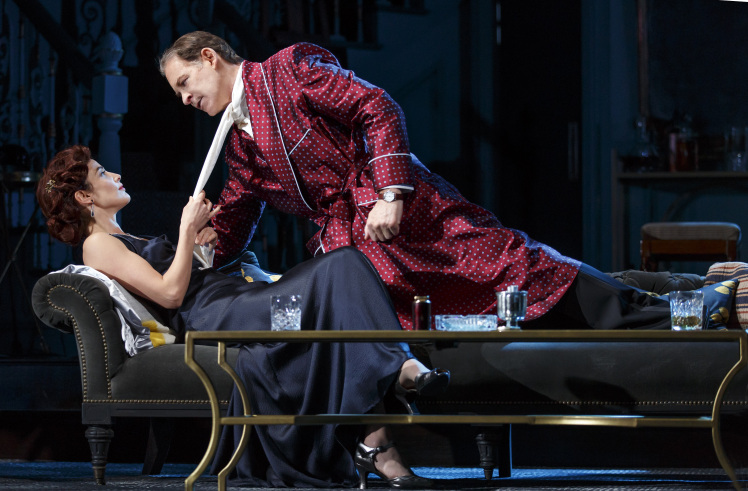 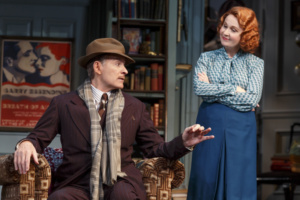 Moritz von Stuelpnagel’s revival of Noel Coward’s Present Laughter, stars the terrific Kevin Kline, the comedic Kristine Nielsen and the sturdy Kate Burton. It brings a much needed hilarity and lightness to Broadway, without prat falls or other physical forms of amusement. Here it is all in the intelletual genius of Coward’s words and finely trained actors who express their comedic chops. 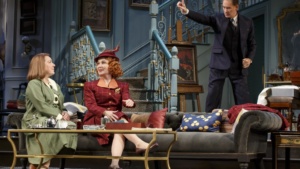 Present Laughter, is for the most part an autobiography of Coward’s alter ego. We are taken back in time to 1939 and the home of matinee idol Garry Essendine (Kline) life a week before he’s due to leave for a South Africa tour. Out of the spare bedroom comes a very young Daphne Stillington (Tedra Mullan), who is infatuated with the older Essendine and believes herself to be his next wife. She gushes and fawns over her idol as he sends her away. His staff starting with his 17-year-secretarial assistant Monica Reed (Kristine Nielsen), gruff Norwegian cleaning lady Miss Erikson (Ellen Harvey) and easy going butler Fred (Matt Bittner) are use to this occurrence. As is his estranged but not yet ex-wife Liz Essendine (Kate Burton). It turns out Essendine, can not say no. He lives his life virtually always acting, though he denies this fact. Another part of his circle is Morris Dixon (Reg Rogers), his director and producer, Henry Lyppiatt (Peter Francis James) who arrive to discuss theatrical business with Garry. Liz tells Garry that she suspects that Morris is having an affair with Henry’s glamorous wife Joanna (Cobie Smulders),, and is concerned that this might break up their theatrical family. Their discussion is interrupted by the arrival of Roland Maule (an annoying Bhavesh Patel), an aspiring young playwright whose play Garry has rashly agreed to critique. Liz leaves, and Roland rapidly becomes obsessively fascinated by Garry, who tries with all his might to get him to leave. It seems Joanna also has a thing for Garry and she ends up on the couch. 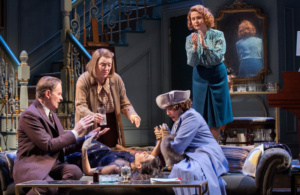 In Act II  Joanna merges from the spare room. When Liz and Monica found out they are incensed. Though she’s married to Morris she has been carrying on an affair with Henry and now she wants Garry. As Liz and Monica try to get rid of Joanna Lady Saltburn (Sandra Shipley), Daphne’s aunt, Daphne, Henry, Morris and Roland all converge. 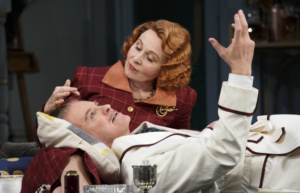 In Act III is the eve before Garry’s departure for Africa, alone in the flat, the doorbell rings and Daphne enters to say she’s bought a ticket and is sailing with him to Africa, as does Roland and Joanna. Joanna has complicated matters by writting a letter to Henry and Morris. Liz arrives to save the day and staes she too is travelling to Africa. When Henry and Morris arrive, Garry fights back by revealing the details of Morris and Joanna’s affair, and Henry’s extramarital adventures. Joanna leaves as Garry, Henry and Morris fight over the booking of an unsuitable theatre. The three are back to business as usual. Liz pours Garry a brandy and tells him she is not only going to Africa but coming back to him for good. Garry remembers Daphne and Roland are still there and tells Liz: “You’re not coming back to me… I’m coming back to you.”

This drawing room comedy briskly amuses as it plays a slow fox trot around these connecting lives.

Kline is a joy to watch, as he uses his physicality to gesture grandly and constantly move like a cat on the prowl. Those staircases by set designer David Zinn are used as fabulous props as Kline uses them to his advantage. Yet, we see his loneliness when he sits at the Grand Piano to play Beethoven. As Joanna Lyppiatt (Cobie Smulders), is a sexy calculated snake. Burton steady’s the production as the woman who understands Garry all too well. All of the supporting characters make a well rounded cast except Bhavesh Patel who seemed to be in a different play. Kristine Nielsen, is at her best here using her rubbery face and perfect line deliveries. I really wish someone would write this women a starring role.

Director Moritz von Stuelpnagel understands that for comedy to be really great we must see the frailties and he does so in an understated way.

Susan Hilferty has out done herself in the costume department. Kline’s suits, dressing gowns and  smoking jacket are done to perfection as is the striking black outfit worn by Joanna.

Suzanna BowlingNovember 29, 2022
Read More
Scroll for more
Tap
She Says: The Profane Shows Us The Guilt of a the Next Generation
Gambler’s Guild to Dying: A Scotsman Betting on Life.