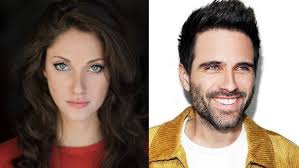 Pretty Woman: The Musical producer Paula Wagner announced Broadway triple-threat Jillian Mueller will take over the coveted role of ‘Vivian’ in the hit Broadway musical, stepping into the iconic boots of both Julia Roberts and Samantha Barks.  Jillian will star opposite Brennin Hunt who garnered rave reviews as ‘Roger’ on Fox’s “Rent: Live!”  Singer-songwriter and actor Brennin Hunt first burst onto the National stage as a contestant on “X-Factor” and is making his Broadway debut as ‘Edward.

Pretty Woman: The Musical, now in its eleventh month on Broadway, opened on August 16, 2018, and features original music and lyrics by Grammy Award winner Bryan Adams and Jim Vallance, a bookby Garry Marshall and the film’s screenwriter J.F. Lawton, and direction and choreography by two-time Tony Award winner Jerry Mitchell.  Julia Roberts attended the August 2, 2018, performance of the record-breaking Pretty Woman: The Musical, which continues to be an audience favorite and just won three Broadway.com Audience Choice Awards including “Favorite Leading Actor in a Musical” for Andy Karl, and “Favorite Featured Actress in a Musical” and “Favorite Diva Performance” for Orfeh.

“To launch our second year of Pretty Woman on Broadway we searched from New York to Hollywood to find a new ‘Vivian’ and we saw many talented young women,” said producer Paula Wagner, “Jillian is exactly what we were looking for – A new star with raw talent, vulnerability, an inner spark, star quality and a gorgeous voice that can belt out Bryan and Jim’s score eight times a week.  What makes this discovery even more exciting is that she was already part of the Pretty Woman family having been a member of our original Broadway cast – she was literally waiting in the wings.”

“The world watched Brennin put his mark on the role of Roger on “Rent Live!,” winning over viewers with his amazing voice, and what’s more impressive, he did it in a foot cast, which of course reminded me of my great friend, and our current ‘Edward’, Andy Karl.” Said director/choreographer Jerry Mitchell. “Brennin made people swoon with that brilliant performance, and he shot to the top of my list for a man to take over the role of ‘Edward.’  We are thrilled to welcome Brennin to Broadway.”

Jillian Mueller was an original cast member of Pretty Woman: The Musical﻿ and is now stepping into the role of Vivian Ward.  Jillian’s Broadway credits include Bye, Bye, Birdie and How the Grinch Stole Christmas, and has starred in the national tours of Dirty Dancing as ‘Baby’ and Flashdance as ‘Alex Owens,’ in addition to the national tours of American Idiot and Memphis. Ms. Mueller’s TV credits include TBS’ “The Last O.G.,” “Law & Order: SVU,” MTV’s “One Bad Choice,” and CBS’ “A Gifted Man.” Jillian most recently starred in a film that premiered at SXSW.

Brennin Hunt recently starred in Fox’s “Rent: Live!.”  The singer-songwriter also recently wrapped the indie feature Walking With Herb set for premiere 2020, and previously guest starred in ABC’s “Nashville” and “X Factor.” Following his music debut in 2016, Brennin was listed in Rolling Stones’ “10 Artists You Need To Know” and since then has toured across North America opening for known acts like America.

Pretty Woman: The Musical﻿ has broken the box office record a total of four times for an 8-performance week at Broadway’s Nederlander Theatre.

Atlantic Records’ Pretty Woman: The Musical (Original Broadway Cast Recording) is produced by Bryan Adams and Jim Vallance and is now available on all DSP’s and on Vinyl and CD in stores nationwide.

The First National Tour of Pretty Woman: The Musical﻿ will begin performances in October of 2020 at the Providence Performing Arts Center in Providence, RI.

Suzanna BowlingFebruary 3, 2021
Read More
Scroll for more
Tap
The Drama Desk Awards Just Got Starry as George Salazar, Be More Chill and More Sign On
As the Fridge Hums, So Does Curse of the Starving Class at Signature