I remember not so long ago, sitting in a 1990 movie theater, listening to the Natalie Cole song “Wild Women Do” blared on the soundtrack, a perfect score to punctuate the meteoric rise of then Hollywood ingénue, Julia Roberts. Her “hooker with a heart of gold” character Vivian even brought this Pretty Woman an Academy Award nomination that same year. Fast forward to 2018 and Pretty Woman is the latest big screen hit to be transformed into a full scale Broadway musical, doing its out of town run in the Windy City. At the helm, director and choreographer Jerry Mitchell, the go to guy for these film-to-stage adaptations, also making hits out of Kinky Boots and Legally Blonde the Musical. Absent are stars Richard Gere & Julia Roberts, whose chemistry was so essential in making that Touchstone Picture a global hit. In their place two bright new talents, Les Miserables film star Samantha Barks and Tony and Grammy Award-winner Steve Kazee. Both Barks and Kazee lift the material with fantastic voices which soar higher than any the material. Speaking of, the book’s written by the original film’s director, Garry Marshall with J.F. Lawton. The pop soundtrack music from the film completely jettisoned, replaced by an original score by Grammy winning rocker, Bryan Adams & Jim Vallance, in their Broadway debut. More Rock and Roll in flavor than traditional Broadway, their score is an array of maybe three or four too many power ballads. Whether a modern day world, harshly sensitized to the #metoo and #timesup  movement, has been clamoring for a new musical where the primary female hooker’s world is only improved when a white knight billionaire comes to her rescue, has yet to be determined, this Woman certainly has several surface charms. 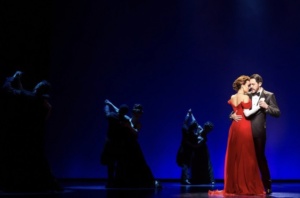 The show hinges on its two leads. Samantha Barks is all but guaranteed a Tony nomination next season for her portrayal of Vivian, her magnificent voice projected to the rafters of the Oriental Theatre. Her “I Can’t Go Back” 11th hour power ballad proving Barks has the chops to make not only the central part her own, but the musical as well. She is also a stunner with solid comic timing. Comparisons to Robert’s are inevitable, however I found her look much more in line with Angelina Jolie, especially when sporting her act two, Gregg Barnes’ designed, tailored white suit. Her silhouette straight off of Jolie’s Oscar red carpet a few years back. As the stoic billionaire Edward, Once star Steve Kazee also has a gorgeous singing voice, demonstrated during his slew of ballads as well. With that said, his character needs a bit more fleshing out before the Broadway debut. He is currently too one note to be the requisite romantic lead they very much need him to be. Lifted by the two magnificent leads, where he rescues her and then she rescues him right back, the “never give up on your dream” theme is certainly on its way. 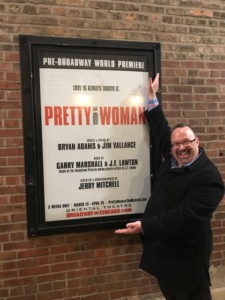 Also of note, the two primary supporting characters who steal every scene they are in. Loudmouth and streetwise best friend, Kit DeLuca (Tony Award-nominee and vocal powerhouse, Orfeh) and Mr. Thompson, the hotel manager (Eric Anderson) are simply put, magnificent. Thompson should also be guaranteed a Tony nomination for his array of surprise supporting characters, of which I will not spoil here. The sight gags though are quite charming. His quick change assistants clearly earning their paychecks during every show. Gregg Barnes’ costuming also strikes all the right notes. The polo match scene is an Easter Parade of pastel bonnets and fascinators reminiscent of the recent royal wedding. The eggshell adorned, mean spirited, Beverly Hills shopkeepers at “Nellies on Rodeo” and the iconic Opera scene red gown supplying all the visual nostalgia for any fan of the original film, now attending the live stage show. Lastly, Mitchell’s fantastic, flirty and frenetic choreography impressed in the few big splashy production numbers. Before opening on Broadway, this piece requires a few more peppered in overall. The ballad heavy act two needs a significant dose of more oomph!

Now the problems. The real disappointment is the show breaks absolutely no new ground as it has been reworked from the screen to the stage. You need to more than refer to this as a “love story” in all of the marketing to make this musical a real compelling love story. For all the talk about beefing up the Vivian role to be more of a feminist, this show suffers the same fatal flaw of the Sex and the City series. Is feminism truly defined through the superficial consumerism of an unlimited credit card balance or an endless array of fancy, designer stilettos, or in this case, thigh high boots held together with a safety pin? Also, anyone who has seen the film knows Vivian is a hooker who doesn’t kiss on the lips because that is deemed by her to be “too intimate”. That same absurdly silly line is used here too, so when the characters do finally kiss, it is not at the conclusion of a song, so it plays like a whimper, not a bang. This kiss should be climatic, and sadly, that tension is currently nonexistent during the scene. Also a surprise for this “emancipated” tale, the creative team is decidedly male, including David Rockwell’s scenic design, Gregg Barnes costuming, Josh Marquette Josh Marquette, lighting by Kenneth Posner & Philip S. Rosenberg and Jerry Mitchell serving as choreographer and director. Producer Paula Wagner is the lone hen in this pack of roosters.

Pretty Woman the movie was a popcorn nibbling, summer rom-com that proved far more popular than anyone involved could have ever imagined. In its current incarnation, it is doubtful this Woman will be a critical darling, but it has potential. Barks and Kazee are the undisputed champions of this piece, but they cannot play these parts forever. Orfeh and Anderson walk away as the MVP’s, although it will be a challenge for anyone to hum these songs an hour after leaving the theater.  Not quite the cultural touchstone the original movie proved to be, Pretty Woman the Musical includes odes to all your favorite revenge shopping moments of the film, but forgoes much else. The fantasy elements of the story have a real challenge lifting off when tethered to the ground by the realities of the misogynistic and classist story. The good news is there is still time to work on all of this before Pretty Woman the Musical hits New York and Broadway this summer.

Pretty Woman the Musical played a 5 week pre-Broadway engagement at the Oriental Theatre in Chicago.