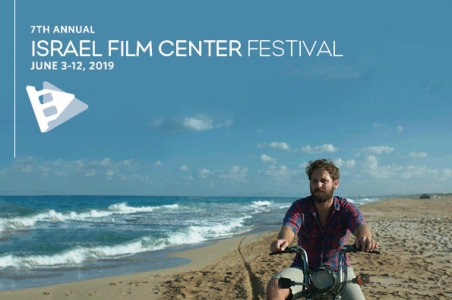 In its 7th edition, the Israel Film Center Festival includes 10 features and two TV series running from June 3rd-12th. The program spotlights Orthodox-themed films, ones which show the diversity of Israeli life which includes Arabs, youth at risk, Ethiopians, the military, the young and the elderly — a full spectrum.

Said Israel Film Center Festival director and founder Isaac Zablocki, “Beyond the clear trending of Orthodox-themed films, one can also see the diversity of life in Israel through our selections. Our film themes highlight Arabs, youth at risk, Ethiopians, military, the young, the elderly — a full spectrum of life.”

The festival’s Opening Night selection will be Joseph Madmony and Boaz Yehonatan Yacov’s thought-provoking film “Redemption” (“Geula”). The story of a devout Chassid who must return to his rockstar lifestyle in order to pay for his daughter’s medical bills, it explores the issue of how to balance religious devotion with art, family, and friendship, all while making peace with the past. The film won both the Ecumenical Jury Prize and Best Actor award (for star Moshe Folkenflik) at the 2018 Karlovy Vary Film Festival, and the Audience Award at the 2018 Jerusalem Film Festival. “Redemption” screens Monday, June 3 at 7 p.m., followed by a Q&A with director Boaz Yehonatan Yacov.

The festival honors Nesher — a leading voice in Israeli cinema for over four decades — with a retrospective on Friday, June 7, screening two films from his filmography. Israel’s all time biggest box office success, his Turn Left at The End of The World (2004) helped revolutionize Israeli cinema as a profitable industry; a newly restored Rage and Glory (1984) — about a Stern Gang cell that falls apart during an attempt to assassinate a senior British officer in pre-state Israel — also screens.

As in previous years, the festival shines a spotlight on Israeli television which has become an international phenomenon and one of Israel’s leading exports. Included will be the New York premiere of the first two episodes of “Stockholm” and the first two of “Autonomies.” Both will be part of the JCC’s annual free, all-night Tikkun Leil Shavuot event beginning Saturday, June 8th at 10 pm and ending Sunday, June 9th, at 4 am.

The Israel Film Center of the Marlene Meyerson JCC Manhattan is the leading resource for Israeli films in America, with the goal of expanding Israel’s emerging film industry and promoting Israeli culture in America. A program of the Carole Zabar Center for Film, it serves as an exhibitor, promoter, educator, funder, distributor, producer, network organizer, advisor, and festival producer, and includes a viewing library and online database of Israeli cinema and the leading Israeli film streaming site.

Together with its community, the Marlene Meyerson JCC Manhattan creates opportunities for people to connect, grow, and learn within an ever-changing Jewish landscape. Located on 76th Street and Amsterdam Avenue, the JCC is a vibrant non-profit community center on the Upper West Side. The cornerstone of progressive programming in Manhattan, the JCC serves over 55,000 people annually through 1,200 programs each season that educate, inspire, and transform participants’ minds, bodies, and spirits.

Since its inception, the JCC has been committed to serving the community by offering programs, classes, and events that reach beyond neighborhood boundaries, reaching people at all stages of their lives.

For the complete festival schedule go to: israelfilmcenter.org/festival