Pride and Prejudice What is This Thing Called Love?

Pride and Prejudice What is This Thing Called Love?

If you’ve ever seen a Kate Hamill production, you will know you are in for a wild mad-cap ride. The same is true for Hamill’s newest venture, the insanely original adaptation of Jane Austen’s Pride and Prejudice. Ms. Hamill’s other works include an adaptation of William Makepeace Thackeray’s Vanity Fair and Austin’s Sense and Sensibility. Hamill also stars in her productions, and this time she inhabits the lead, Lizzy, as her boyfriend and fellow playmate Jason O’Connell takes on Mr. Darcy. The rest of the cast, through hats and various costume pieces (thanks to costume designer Tracy Christensen), morph into the rest of the characters, sometimes with just a brief turn of the body. 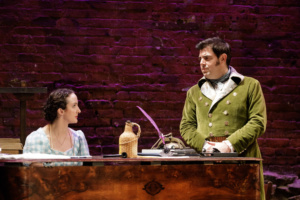 Kate Hamill and Jason O’Connell in Primary Stages’ Production of Pride and Prejudice. All photos by James Leynse.Starting with the song “The Game of Love” we know immediately how these characters feel about the subject at hand. Lizzy, with her screwed up face, lets us know she’ll have none of these games and will never date, let alone marry. The rest of her sisters have quite a different attitude. The lovely Jane (Amelia Pedlow) falls for the puppy dog Mr. Bingley (John Tufts), who also plays her homely and bitter sister Mary. Lydia, (Kimberly Chatterjee) the youngest and also the silliest, falls for a cad, Mr. Wickham (the fabulous Mark Bedard), who also plays the most annoying Mr. Collins – and nearly steals the show – as well as Ms. Bingley. When the romances go array, Mrs. Bennett (Nance Williams) has over-the-top fits, as Mr. Bennett (Chris Thorn) sits and tries to read the paper. When Lizzy meets her match in Mr. Darcy both have to admit and drop their pride and prejudices. 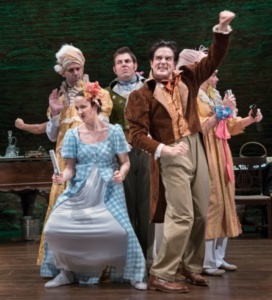 All the actors are exquisite at what they do, but I must single out Mark Bedard as Mr. Collins. His performance is a master class in acting. Even when he does something as simple as removing his epaulets to become another character, his intent goes beyond the norm. But just wait until he stutters his words, trips over himself, and has a match of wills between two chairs. There is no way you will not laugh boisterously at his antics. Bedard has the gift of mirth. This is a cast who laughs at themselves, has a rackingly good time, and lets the audience in on the joke. Jason O’Connell’s Mr. Darcy is on the other side of the spectrum. He gives the most real performance and we see his struggle of wanting to love but constrained by his nature. Amelia Pedlow as Jane just by looks and bearing seems to have stepped outside of the novel.

The whole creative team including costumes by Ms. Christensen, lighting by Eric Southern, sound design by Palmer Hefferan, set design by the wonderful John McDermott and choreography by Ellenore Scott fit the bill and set us in for the magic at hand.

I really loved Amanda Dehnert’s direction. Normally, Ms. Hamill’s shows are a little too camp for me. What Ms. Dehnert has done has kept the laughter but added in some real moments that will make you remember why you so love this novel. She makes the whole experience accessible. You still have the keystone cop moments, but also that heart wrenching will-they-or-won’t-they moment.

Hamill’s writing and acting have never been better. There is no doubt that she is one of the creative geniuses of her time and I so look forward to her next adventure.

If you need some laughter in your life, head on down to The Cherry Lane for this hysterical and imaginative production. You will be glad you did.

Pride and Prejudice: Primary Stages and the Hudson Valley Shakespeare Festival at The Cherry Lane Theatre