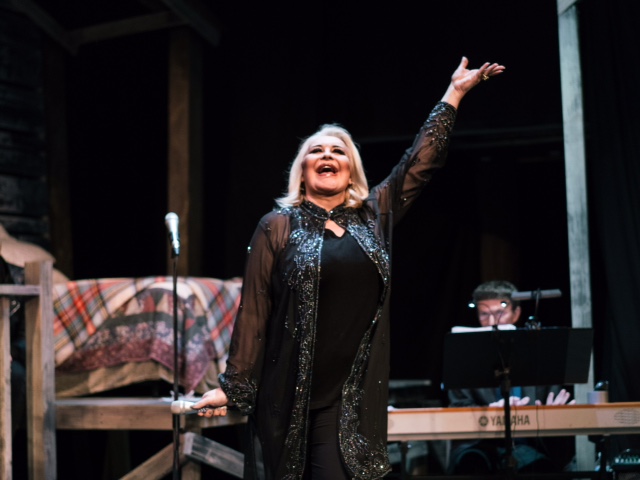 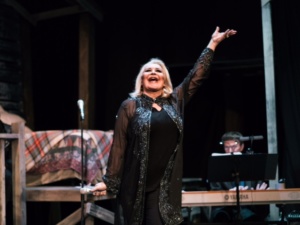 The feeling of fellowship and comradery that resonates throughout the members of the talented Chicago Theater community was delightfully on display Tuesday evening at the Pride Arts Center. Selected nominees from the 44th Annual Non-Equity Jeff Awards brought their ferocious vocal prowess out to play one more time,  just a few weeks before the actual ceremony crowns official winners in each category. Checking their egos at the door and performing in their everyday street clothes, over a dozen of Chicago’s finest demonstrated precisely what they do best. Getting the formalities out of the way, this year the Jeff Awards has a total of 127 nominations in 26 separate categories representing productions that opened between April 1, 2016, and March 31, 2017. Recognizing excellence in non-union Chicago theatre, the evening’s mix was filled with performers who have lit up stages and storefront theaters throughout the Windy City. But this night was not about categories and competition, it was about celebration through song. Pride Arts Center hosted the evening for the first, and hopefully not the last, time. This inaugural night featured music direction from Robert Ollis, a nominee himself for his work on Pride Films & Plays Priscilla: Queen of the Desert, who tickled the ivories for all of the evening’s entertainers. Speaking of Priscilla, the event’s hostess was the formidable Honey West, also a nominee for her role as “Bernadette” in that same production. Quick with a clever one-liner, West was joined by her co-stars and fellow nominees, Luke Meierdiercks and Jordan Phelps, for a medley of Hot Stuff, True Colors and MacArthur Park, all from the Pride Films and Plays hit. 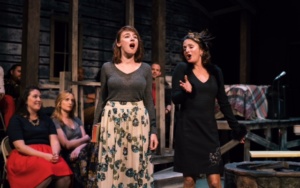 Taking the stage next, and traveling from the Australian Outback to upper crust society in Europe, Stephanie Stockstill and Jenifer Tyler regaled with selections from their twice extended production, Northanger Abbey from Lifeline Theatre. Sweet Indelicate Complexities and A Woman’s Reputation were just as charming here as they were last summer on the Roger’s Park stage. Just up the street from Lifeline Theatre is the Theo Ubique Cabaret, and up next to perform selections from the Anthony Newley-Leslie Bricusse Songbook, Best Actor in a Revue nominees Graham Thomas Heacock, blowing away the audience with his soulful This Dream and Averis Anderson’s subtle charmer, Feeling Good. Not to be outdone, Royen Kent crooned Lady Dynamite from Best New Musical nominee Haymarket: The Anarchists’ Song from Underscore Theatre Company. 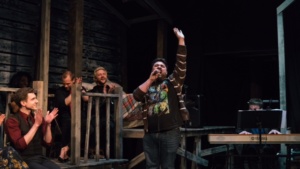 Introducing the next two contenders, Jon Martinez, a nominee himself for his choreography from Priscilla: Queen of the Desert, although this night he was playing proud director of the outrageous antics that were Tonya and Nancy: The Rock Opera, also from Underscore Theatre Company. Queen of Comedy for the night, Veronica Garza, performed her one woman duet, playing mothers to both Olympic hopefuls, Nancy Kerrigan and Tonya Harding.  This Is It, left the audience completely in stitches. Teasing her stage-daughter, “Tonya” with a “good luck following that” bow, Amanda Horvath once again laced up her metaphorical skates, took to the mic to belt Watch Your Back, a cautionary tale from trashy Tonya to the ever-present media. These two did their show, Tonya and Nancy: The Rock Opera, extremely proud. If Veronica was the evening’s Queen of Comedy, the Court Jester was certainly Refuge Theatre Project’s Nick Druzbanski, slaying his one man Turn the World Off,  tour de force performance from High Fidelity: The Musical. Never has a hooded sweatshirt been such a giggle inducing prop. Rounding out the first act, double nominee, Henry McGinnis, first performing  Look At the Sky from Boho Theatre’s production of Urinetown. Chicago had best enjoy these performances from McGinnis before the inevitable New York Broadway stage claims him for their own. 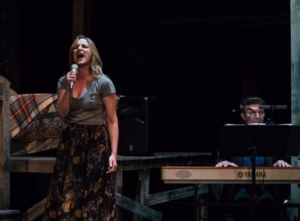 Speaking of stars, I have long been a fan and supporter of Sydney Charles. From drama to comedy, this woman can do it all. Nominated for her role as Dorothy from Kokandy Productions’ The Wiz, Charles is #blackgirlmagic personified. From Firebrand Theatre’s Cabarets to the stage at Theatre Wit, I am continually blown away when hearing Charles masterfully sing. Her rendition of Home landing her both a well deserved nomination in the Best Actress in a Principal Role – Musical category and a raucous round of applause from the audience in attendance. “It’s always the little ones that blow you away” quipped West after Charles wrapped. Her costar, Steven Perkins, performed the Tin Man’s What Would I Do If I Could Feel  before announcing he is “retired” from acting. Here is hoping he quickly reconsiders that premature decision. You may recall from a previous review, I was blown away by a little musical based on a tabloid story, Griffin Theatre Company’s Bat Boy The Musical. Sadly closed, Anne Sheridan Smith and Henry McGinniss once again played “mother and son” during the harmonious duet, A Home for You and Let Me Walk Among You. Here is hoping Bat Boy The Musical and Urinetown’s double nomination earn some warranted gold for McGinniss. However, giving him a serious run for his money in the Best Actor in a Principal Role – Musical category, Maxwell DeTogne from High Fidelity: The Musical. I also thoroughly enjoyed that musical rom-com from Refuge Theatre Project and we were all treated to one more trip to the Desert Island All Time Top 5 Breakups. 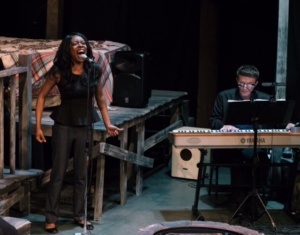 Before the evening finished, musical director, Robert Ollis spoke about what a thrill it is to be a nominee in the “vibrant theater community in Chicago.” Joining Honey West, Luke Meierdiercks and Jordan Phelps from Priscilla, the entire troupe of nominees closed with a ceremoniously appreciative anthem, We Belong, from Pat Benatar and the Pride Arts Center hit, Priscilla: Queen of the Desert. Splitting hairs for a moment, the difference between Equity and Non-Equity awards are that the Equity awards honor productions performed under union contracts, while Non-Equity awards recognize outstanding achievement in professional productions of Chicago area theatres not operating under union. With over 250 theatrical venues in the Windy City, each performer brought their signature tailored showmanship and talent,  sharing snippets of music from shows deemed “excellent” by the opening night judges of the Joseph Jefferson Committee. I would like to stress once again, this cabaret was not about competition, it was about music and the soon to be awarded Chicago based talent who performed it so well. I raise a glass to celebrate each nominee’s accomplishments and hope they are currently enjoying the recognition they so richly earned and deserved. In just a few weeks, numerous aforementioned individuals will hear their names read by a colleague or collaborator from an award show podium, but for tonight, everyone involved was a winner. 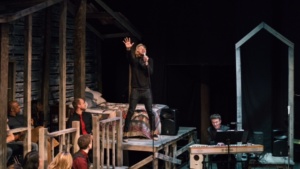 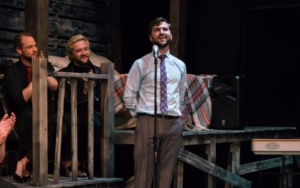