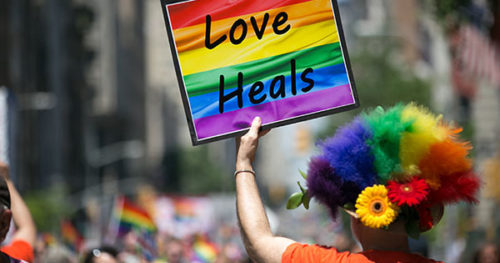 BroadwayHD is kicking off our #Pride celebration with Hello Again and favorites like Kinky Boots, Indecent, and Brokeback Mountain! On June 25th join in with the Falsettos Sing-a-Long Watch Party. This is a special free sing-a-long watch party of Live From Lincoln Center’s Falsettos in association with Jujamcyn Theatre. The Falsettos Sing-A-Long is the first of its kind done for a Broadway stage musical and will allow fans worldwide to belt out their favorite tunes along with the stars of the musical at 8pm.

Guggenheim Celebrates New York City Pride with the “Embrace” edition of the Guggenheim Circular, launching June 24, Works & Process, the performing arts series at the Guggenheim, will premiere 10 Works & Process Artists (WPA) Virtual Commissions featuring LGBTQ+ artists and present Inside the Beat with Les Ballet Afrik,a rhythmical exchange of style and conversation of cultural diversity through classes, demonstrations, and a live DJ set to set the tone.

The 10 newly commissioned video performances will highlight the creative expressions by LGBTQ+ artists. Commissions, an initiative founded at the onset of the pandemic to financially support artists and nurture their creative process during these challenging times.

Inside the Beat with Les Ballet Afrik A rhythmical exchange of style and conversation of cultural diversity through classes, demonstrations, and a live DJ set to set the tone. June 20 – 29, 6:30 pm EDTWorks & Process Instagram Live (@worksandprocess)

Vogue Ballroom Legend and Founding Father of The Royal House of Oricci, Omari Wiles, proudly presents Les Ballet Afrik dance company and Oricci family members as they highlight their individual roots and how they collectively fuse theses styles into a distinctly unique family and company way of life and expression. Lessons will take place every day at 6:30 pm on Works & Process Instagram Live (@worksandprocess).
June 20: Intro to Afrik Fusion with Omari WilesFounder and Choreographer for Les Ballet Afrik

June 22: “On the 212” – Femme and Street Jazz with Craig Washington  Washington will discuss how his street jazz style fuses with Les Ballet Afrik

June 23: Welcome to My House with Eva Bust-A-MoveBasic house-groove break down, house groove demo, and how to find your groove

June 25: Wind Up with Milerka RodriguezAfro-Caribbean-Dominican technique, focusing on hip isolations, rotations and how it relates to vogue

June 28: Yuki Sukezane and Yuhee YangPosing from a distance with a performance showing how they fuse their Asian backgrounds with Afrik Fusion

On a special Pride edition of “The Mama Rose Show” that was posted today on Youtube, host and New York City-based actor and cabaret star Stephen S. Miller (aka “Mama Rose”), in a letter to America and our government, responds to the Supreme Court of the United States’ (SCOTUS) ruling that the Civil Rights Act of 1964, which prohibits sex discrimination, now also applies to protecting LGBTQ+ workers from job discrimination. “We have had one major stepping stone in our future,” said Miller in the episode. “I am here today to make a stand and support and listen. We have to say to the government that this one step, although a very important one, there are so many more steps that we need to take.” The show continues as Mama Rose sings Dick Gallagher (music) and Mark Waldrop’s (lyrics) song “Laughing Matters” originated in the 1996 gay musical revue Howard Crabtree’s When Pigs Fly, and later recorded by Bette Midler. “Laughing Matters,” an ironic title and song that foreshadows the events of the world today, include the following poignant lyrics:

Suzanna BowlingApril 21, 2022
Read More
Scroll for more
Tap
What To Watch June 18th To Take Away The Blues
YouTube Contest, “With Justice for All”