Primary Stages’ God Said This, and That Was Just a Bit Too Much to Take In 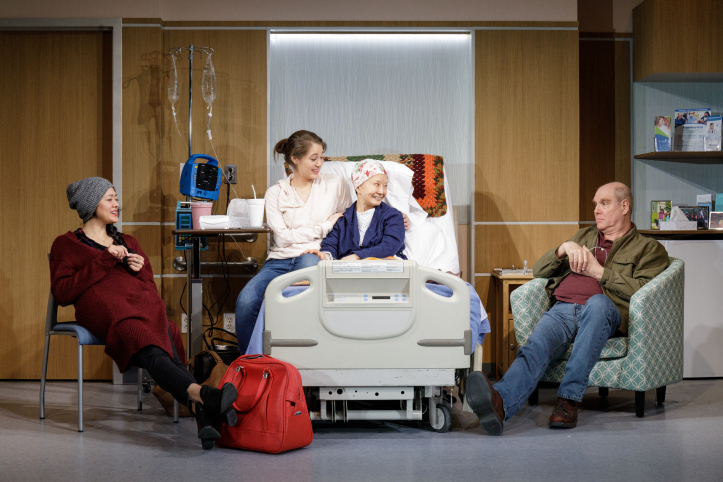 Primary Stages’ God Said This, and That Was Just a Bit Too Much to Take In

It all starts with an AA speech that veers around and hollers out all the aspects and information that one might need to know about playwright Leah Nanako Winkler’s (EST’s Kentucky) new play, God Said This. Redemption and the impossible-ness of understanding God’s plan is what is being administered here, asking the eternal question: why is it the good and kind that are rewarded with disease and pain, and meanness and abuse, even when brought forth from pain and alcoholism, is given a second chance for awakening. It’s a tough and emotionally slapping proposal, and as directed with a haphazard whiplash style by Morgan Gould (Studio Theatre DC’s I Wanna Fucking Tear You Apart), the punches come wild and free, thrown out by all missing the intended mark just as often as the play sucker punching the ones it is aiming for.  The first speaker is James, played with guts and dimension by Jay Patterson (Broadway’s K2), and he’s an alcoholic, something he reminds us often as his AA speeches are spread here and there through the piece creating a structure of awareness and introspection that anchors the play in an AA humility.  They are honest enough these characters, just like most of the play, diagnosing the discomfort and hurt that James and his family are feeling watching his wife and their mother, the strong and sweet Masako, played adorably by the radiant Ako (WTF’s Moscow x6) deal with the painful chemo/radiation treatment for her invasive cancer. It also shines an exploratory light on the difficulty he has connecting and engaging with his two diametrically opposed daughters; the fireball Hiro, played with radical tension by the talented Satomi Blair (JCTC’s Land O’Fire), and the religious rigid one, Sophia,  played with fairly obvious intentions by Emma Kikue (Triad Stage’s Vrooommm!). Blair definitely has the showier role, expanding on the wounded angry child with wild fun abandonment, while Kikue is saddled with the duller stance, but does well adding layers to the flat surface given.

There’s a lot going on in that family of four. Caricatures played for real, randomly wheeling about around the central hospital bed where the earth mother and wife sits holding the strings of connection together with a simple conviction and desire. She’s fighting carcinosarcoma, and the three around her are doing battle their own disease, mostly amongst themselves, with anger and frustration being thrown around as hard as rocks meant to inflict hurt and draw blood. It’s a tough topic to balance, refreshing in a way, as it is definitely not typical or standard practice for a disease of the week story. In many ways Winkler does a credible job bringing in doses of humor and rage, especially when she calls in the outsider, John, played forcibly by Tom Coiner (Merrimack Rep’s Silent Sky), a man filled to the brim with peace on top of raging frustrations. I’m not really sure why he’s there in this already complex family drama, other than to drive the compelling Hiro forward and to give her a board to bounce her messy shit off of. He sure is fun to have around thought, as it gives us somewhere else to go besides the hospital room. But as a parallel road trip to the overall dissection of sickness and disease, and to combat the cries to God of “Why her?“, God Said This tries to say way too much about way too many things.  I just wanted Winkler to let God have just a few less pointed things to say in order to make this piece tighter, clearer, and more emotionally real.

As Masako holds court center stage in the hospital setting, designed a bit lazily by Arnulfo Maldonado (ATC’s Fireflies), with fun and meaningful costuming by Jessica Pabst (PH’s Log Cabin), straight forward lighting by Ryan Seelig (Wooster Group’s The B-Sides), and solid sound by M.I. Dogg (Primary Stages’ Downstairs), the drip of the treatment never fully connects. We see how lovely Masako is, and their meet/cute is exactly that. She’s glorious, and I want only the best for her, but the stab of the syringe never truly registers.  Maybe I needed to look away from the needle puncturing of the skin, having just lost someone who was dear to me to Cancer, causing my heart to attempt to stay protected from fully engaging to the family’s pain. Or maybe the numerous side roads and detours Winkler felt she needs to take this family of four on lost me on the way to the hospital. All I know is I wanted Masako to survive, but I also waited impatiently for the play to end, possibly so I could get away from the discomfort of the deadly disease and/or this dysfunctional damaged family. I’ll let you decide, but for this theatre goer, I enjoyed the creations of character, but had no desire to go to the wake and give comfort to these complicated souls.