Suzanna Bowling
“Anything you can do in excess for the wrong reasons is exciting to me.”
—Carrie Fisher 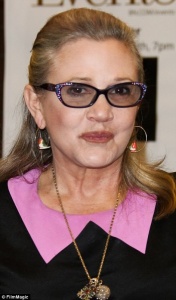 On December 23, 2016, Fisher had a massive heart attack while traveling from London to California. She was administered CPR and rushed to a hospital upon landing in Los Angeles and was reported to be in critical condition. Fisher, 60, was kept alive with CPR administered by a fellow passenger after she stopped breathing for about 10 minutes. Carrie was in the process of traveling home for Christmas having spent the last few weeks promoting her new memoirs, called The Princess Dairist, where she tells of her affair with Harrison Ford. 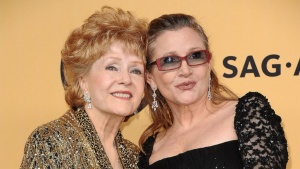 Carrie Fisher became a cultural icon after starring as Princess Leia in the Star Wars movies. Her first novel, Postcards from the Edge, was published in 1987. Carrie was born October 21, 1956, in Los Angeles, California to Hollywood golden couple Eddie Fisher and Debbie Reynolds. Her parents went on to divorce when she was two years old and her father married Elizabeth Taylor. 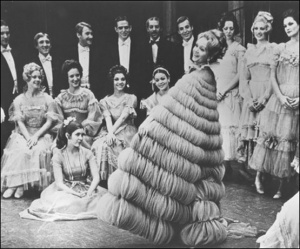 Carrie appeared alongside her mother in Las Vegas when she was 12 years old  and in 1973 she joined her mother on stage in the Broadway production of Irene. 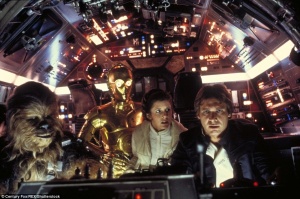 Her first film appearance was in the comedy “Shampoo” in 1975 starring Warren Beatty, Julie Christie and Goldie Hawn. In 1979 Carrie was rocketed to international stardom after landing the role of Princess Leia Organa in George Lucas’s “Star Wars Episode IV: A New Hope.” Also starring Mark Hamill, Harrison Ford and Alec Guinness, Star Wars was a critical and commercial phenomenon.  Carrie and her co-stars became overnight superstars and the subsequent merchandise saw their faces on everything from posters and plastic dolls to duvet covers and fluffy slippers. Carrie reprised her role in the equally successful sequels – “The Empire Strikes Back” in 1980 and “Return of the Jedi” in 1983. 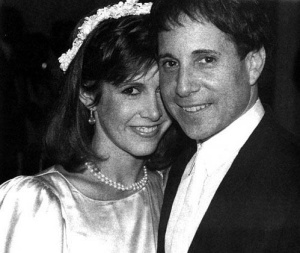 While her career was soaring, Carrie’s personal life was becoming troubled as she battled an increasing addiction to alcohol and drugs. Following a brief engagement to Dan Aykroyd in 1980, she married singer Paul Simon in 1983. However, the marriage was not to last and ended some eight months later. Fisher had a daughter Billie Catherine, from her relationship with agent Bryan Lourd.

A series of largely forgettable films, including Under the Rainbow (1981) and Hollywood Vice Squad (1986), but in 1987 wrote the book Postcards from the Edge, which she adapted into a movie starring Meryl Streep. She went on to play supporting roles in films, write books and revise Hollywood scripts. 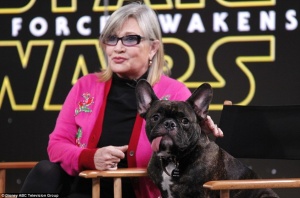 Fisher also turned in a series of solid supporting roles in films such as When Harry Met Sally (1989) and Soap Dish (1991), in which she took a comic turn as a bawdy casting director. She later landed her own interview show with Oxygen Media called Conversations From the Edge With Carrie Fisher.

A talented screenwriter, Fisher has helped revise many Hollywood scripts, including Sister Act (1992), Outbreak (1995) and The Wedding Singer (1998). She has also mined her own life experiences to create such bestselling books as Wishful Drinking (2009) and Shockaholic (2012). 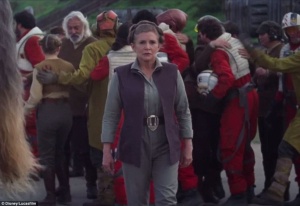 Carrie also appeared on Broadway in in 19080 in Censored Scenes From King Kong, from 1982-83 in Agnus of God and in 2009- 10 was nominated for a Drama Desk Award for her one-women show Wishful drinking. 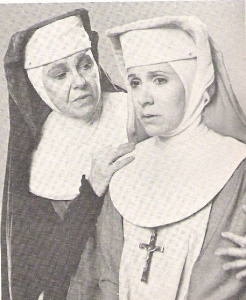 Agnus of God with Geraldine Page 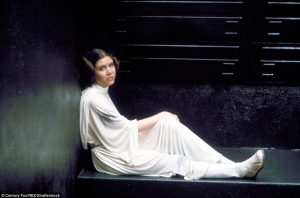 Carrie is survived by her mother, daughter and brother Todd Fisher.