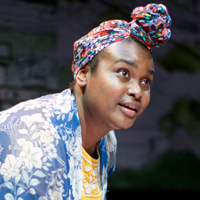 Providence of Neighboring Bodies Quirky But So Well Acted

Providence of Neighboring Bodies Quirky But So Well Acted 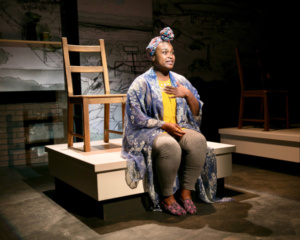 Dutch Kills Theatre (In Quietness, The Sister) has rented out Ars Nova for two shows. I attended Providence of Neighboring Bodies by Jean Ann Douglass and directed by Jess Chayes, who has just been awarded the 2017 League of Professional Theater Women Lucille Lortel Award. 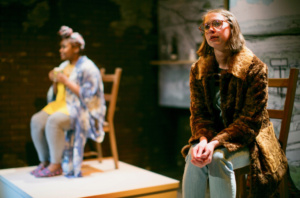 The play takes place in North Providence, Rhode Island as Dora (Lori ElizaBeth Parquet) is beyond excited at making friends with her next door neighbor  Ronnie (Amy Starts). Dora is so sure they were meant to be friends since they share joining balcony’s overlooking the parking lot, however Ronnie isn’t as enthusiastic. when Ronnie tosses over a beer can and it crashes into a parked car’s window. Dora toys to save her new friend. In the meantime Ronnie has been trying to rent out her couch Air BnB style and finally has a taker. Jane (Dinah Berkeley) arrives and she is not what anyone expected.

The night I saw Providence of Neighboring Bodies, the girl playing Ronnie had a family emergency and we had an actress who stepped in book in hand, but Ms. Starts did quite well. Ms. Berkeley was perfect and looked exactly like who she was suppose to be. Ms. Parquet is wonderful. She is the perfect blend of joyous enthusiasm and confidence in who she is. I really wanted to see what she does next.

Ms. Douglass writing is very interesting and the play peals down the layers of friendships, loneliness and prejudice. Ms. Douglass has a lot to say and it hits home in subtle through lines. She uses monologues into dialogue to create inner turmoil and it is highly effective.

The set by Carolyn Mraz, lightening by Derek Wright and the staging by Ms Chayes were perfect for the piece.

This is a company, actress and playwright to keep your eyes on. If you get a chance Providence of Neighboring Bodies just may surprise you at how good it is.

Suzanna BowlingMay 16, 2022
Read More
Scroll for more
Tap
Evening at the Talk House Is Too Much Blah Blah Blah
Two Legends Together Chita Rivera and Tommy Tune Two For The Road