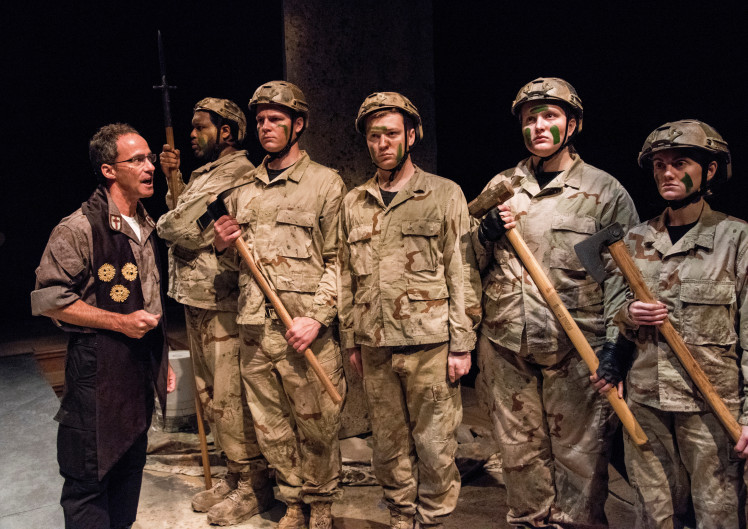 PTP/NYC’s Pity In History: Funny Fanaticism In War Against Art and Property

PTP/NYC’s Pity In History: Funny Fanaticism In War Against Art and Property 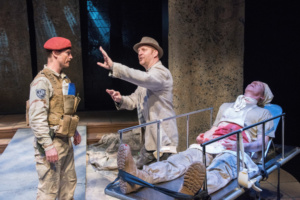 Have you ever wandered into a majestic ornate house of worship in some foreign city (I’m a bit of an atheist church-seeker on holiday) and wondered how this came to be. Where did all this money come from to build this ‘temple’ to someone’s God? And at what cost to those that struggle to survive who live in its shadow? Is this what religion is, a grand and spectacular showcasing of art and wealth to overwhelm and send the masses into a state of awe and worship? Or is this greed and hypocrisy being masked as something else? 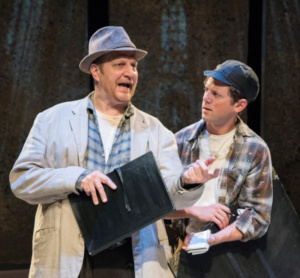 This conceptual argument on religion and idolatry is just one of the many complex topics debated in the interesting and smart drama written by the British playwright, Howard Barker (No End of Blame, Scenes from an Execution) who is also something of an iconoclast. As a destroyer of religious imagery, Barker set out with his gripping teleplay, Pity in History, (click here for the gripping first scene starring the late great Alan Rickman) to utilize a 17th Century Civil War as a theoretical backdrop to examine art, social class, war, religion, and patriotism in the age of Thatcherism in England.  The Potomac theater Project (PTP/NYC) has taken this funny and engaging BBC teleplay and updated it to the present in order to not only, kick start their 31st season at Atlantic Stage II Theater, but also dive into the dilemmas and postures of politics and religion in our current world order. As directed by Richard Romagnoli, this remarkably funny and challenging examination of competing ideologies throws a band of modern geared-up soldiers (costume design by Danielle Nieves) fighting in the name of God, guided by a high-minded chaplain (a strong Chrisopher Marshall), and places them inside a cathedral of some sort filled to the brim with art and sculpture. The smart and utilitarian design by Mark Evancho with lighting by Hallie Zieselman and sound by Cormac Bluestone works remarkably well illuminating conflict and the contradiction that exists between spiritually-influenced high art and wars that use God as their centerpiece.

Sergeant Boys (a strong Christo Grabowski) and Factor, an officer (a solid Jay Dunn) with their band of fighters (Kahari Blue, Connor Wright, Sam Tompkins Martin, Victoria Jane squish, Kaitlynd Collins) all share the idealism of their God given preference, and utilize that fanaticism to brazenly up their argument against all that they see about them.  The troop of actors carry  out their task with vigor but lack a unity in sound and strength in character, making the moments loud but clumsy in moments. Playing havoc with their feelings of superiority over their enemy and their enemy’s God, is the very symbolic Murgatroyd, a cook shot in the abdomen, possibly by one of their own, a scared and nervous Apps (Kaitlynd Collins). The cook is dying a slow death rattling the soldiers as he rails against God and all around him. Artfully cynical and sarcastic, Jonathan Tindle (HERE’s Roger&Tom) plays the dying man with ineffable humor and biting wit, especially when he is banished to the basement to die his slow death alone and in the dark by those who can’t listen anymore to his banter against God. Once banished, his impact lessens, but his bite and banter never fail. 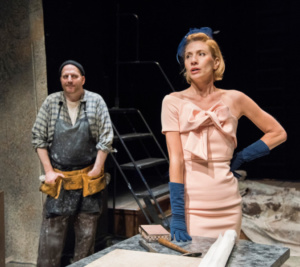 In the center of this chaos where tensions regarding art and property collide, sits the artist, Baukroger, beautifully played with humor and depth by Steven Dykes  (PTP’s Victory). He is calmly trying to continue forward in his quest to create a tomb for the wealthy husband of socialite Venables (Kathleen Wise), a widow who won’t retreat from the war against art and beauty.  Wise (PTP’s Vinegar Tom) plays the woman with the upmost of complexities, and although her intensions are clear generally, her pathway and impulses are confusing. But Baukroger, with the help of his easily influenced but ultimately loyal apprentice, Pool, portrayed by a charming and convincing Matt Ball (Irish Rep’s Defender of the Faith) is steadfast in his stance.  Untethered to the fanaticism of politics and religion, but deeply committed to his work, he has to find the patience to stand down and watch her art and his work destroyed, all in the name of one man’s God. He is a simple man, who doesn’t see himself as great, but knows that whatever is demolished in the name of God, will need to be rebuilt and replaced once the war has moved on, because “if they do not crush your fingers, you can make it all again”. 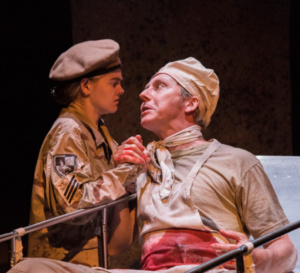 Updating this piece from the conflicts between the Republicans and the Monarchists of 17th Century England, with Barker being inspired by his revolution against Thatcherism, the piece brings images of the destruction of art, sculpture, and history in the Middle East to mind. The director, in his program notes, speaks about the conflict between art, and religion through a contemporary lens focusing on the political events in Great Britain and the United States. For me, the religious wars throughout our world are more to the point as we watch intolerance against another soul’s belief system growing at alarming rates globally. The idea that art and statues (even metaphorically speaking) inspired by religious beliefs should be destroyed in the name of God, when one’s God seems to be at war with another one’s, is as heart-breaking to witness as it is to see Baukroger’s face when he knows what is to come.  It’s a stellar piece of theatricality, as is this whole endeavor of staging Pity In History. Using humor and sincerity, Baker as seen through the sharp directorial eyes of Romagnoli, reminds us of the brutality generated by ideological postures and politics. And although their are moments of unclear intentions, mostly wrapped up in the cook’s demise, the piece has staying power. It will float through our thoughts and dive deep into our emotional consciousness. Now give the poor man his pickle. He deserves one.
So for more, go to frontmezzjunkies.com
Related ItemsHoward BarkerNewPity in HistoryPotomac Theatre ProjectPTP?NYCrichard romagnoliRoss
Off Broadway

Suzanna BowlingJanuary 18, 2021
Read More
Scroll for more
Tap
Me & Ella a Tuneful Trip of Memories
The Ziegfeld Club Is Calling All Female Composers of Musical Theatre For The Billie Burke Ziegfeld Award