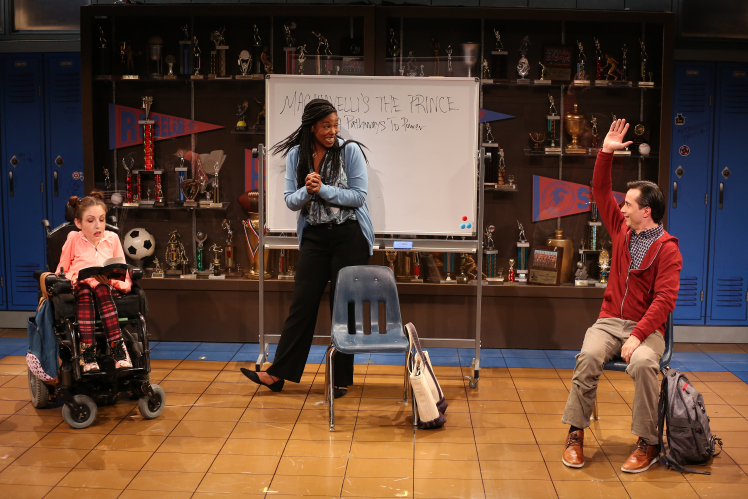 Public and Ma-Yi’s Teenage Dick is Solid, Smart, and Sassy

Public and Ma-Yi’s Teenage Dick is Solid, Smart, and Sassy

Ross
Some Shakespeare is once again getting the high school treatment over at the Public Theater with the help of the Ma-Yi Theater Company, the people who brought us last fall’s hit musical, KPOP.  Getting the “Ten Things I Hate About You” (Taming of the Shrew)  and “She’s The Man” (Twelfth Night) revitalizing modern update is the new teen dramedy, Teenage Dick, a wise and hilariously thoughtful send up of Richard III.  Fantastically written by Mike Lew (Bike America) with a full dose of sass and smarts, he states just what is on the table for him within his first page of the actual play. It reads (I added the bold type for emphasis):

This first page of the script has a lot on its mind. It’s obvious that when Lew first thought about creating his provocative and fun take on Shakespeare’s historical play from 1593, the requirements he established were born from a place of intelligent, suggesting an ideal of diversity and visibility for disabled artists and minorities that is rarely seen. Ralph B. Peña, Producing Artistic Director of the Ma-Yi Theatre Company writes quite profoundly that producing this ingenious new play was a “no-brainer” as “their struggles align closely with our fight to bring more Asian faces and voices to American Theatre“. In an attempt to make this small difference in the lives of the underrepresented artists, this production should be applauded, obviously, as the opportunity given is amazing and energizing. But as presented in Teenage Dick, these amazing actors fly high and strong on their own personal level of skill, talent, and great comic timing. As directed with a smart and sharp witty style by Moritz Von Stuelpnagel (Broadway’s Hand to God, the upcoming Bernhardt/Hamlet), Teenage Dick should be applauded solely for being purely awesome, regardless of anything else, as this is one of the bright and exciting beams of light coming out of the summer theatrical season.

Lew has rightly realigned Shakespeare’s Richard III, lightening the plot and condensing the narrative to a more plausible and manageable crew of six.  In Shakespeare’s tragedy, Richard is a greedy angry man, fighting a war to gain power on the back of Machiavellian principles.  He is seen as an “ugly hunchback” who is “deformed, unfinish’d”, and cannot “strut before a wanton ambling nymph“. The misshapen power-hungry Richard responds quite passionately to the anguish of his outcast position by stating his own personal proclamation of war: “I am determined to prove a villain / And hate the idle pleasures of these days“.  He plots to become King over his brother Clarence who stands before him in the line of succession, and to marry the Lady Anne, the widow of the Prince of Wales, a man who he admits to killing.

Fun stuff, don’t you think, especially if you imagine these characters running around the halls of a high school.  So how does Lew pull this off? Brilliantly, I might say, especially in the casting of the phenomenally engaging and funny Gregg Mozgala (NYTW’s Light Shining in Buckinghamshire), an actor who has cerebral palsy and an uncanny ability to bring substance and wit to the forefront of his characterizations.  The actor, who won a Lucille Lortel Award for MTC’s Cost of Living finds such depth and intelligence in the lead role, along with a perfectly crafted evil sensibility that matches the undercurrent of the original without pandering to stereotypes. Richard wants to change the way things seem to always go at Roseland High, challenging himself to find a way to become the next senior class president. He begins, sounding like a mash-up of Shakespeare and Mean Girls, setting the stage with a declaration of war upon his unsuspecting opposition: “Now that the winter formal gives way to glorious spring fling we find our rocks for brains hero Eddie – the quarterback – sleeping through his job as junior class president. …. He’s Phoebus Apollo whereas I am but feeble.”

The lines and dialogue are pure genius, creating an anti-hero that we can fully get behind. He wants to vault past his inglorious station, not by using pity or by campaigning. “But by systematically destroying the competition“. His plan is formulated, in pure Machiavellian style and logic, right before us, to take down the overly religious rival Clarissa, played with an unending energy by Sasha Diamond (Broadway’s Significant Other) but more importantly, his true nemesis, the horrendous bully and popular jock, Eddie, portrayed with obvious thickness by the talented Alex Breaux (NYTW’s Red Speedo).  The formulation of the plan, assisted unknowingly by his overzealous teacher Elizabeth York, played strongly by the hilarious Marinda Anderson (Public’s Miss You Like Hell), requires assistance from others, and he finds his helpers in the unsuspecting and unaware Buck, a wheelchair-user dynamo, who not so secretly adores the pompous quarterback.  Portrayed by the excellent Shannon DeVido (Off-Broadway’s The Healing), her take on this compelling creation is spot on perfection, finding humor and honesty in every gesture and motorized move. It’s a thrillingly fun ride with her through the halls of this high school, and her reactions to Richard are priceless, especially in her jab at his Shakespearian speech peculiarity. “Who talks like that?” she snaps, flinging the line at him spectacularly, playing with Lew’s not-so-subtle Bard references, making them jump out as something far more fun than if they had just been left alone. With her help, even though she doesn’t realize the full extent of the plan at the time, Richard finds one of the pathways to hold dominion over all of the school.  But he still needs just one more piece to make the puzzle fit perfectly into his devious plan to undermine the electoral chances of the others. That comes in the lovely frame of former favored and most-popular gal in the halls, Anne Margaret.  She’s Eddie’s ex-girlfriend, and as played by Tiffany Villarin (Cherry Lane’s peerless), this girl has more on her mind than maintaining her position at school. Richard attacks, quietly, manipulating Anne into engaging and ultimately trusting this conniving young man.  It’s pure fun and sweet exploitation, until it gets serious.  And it does, almost too quickly and too harshly to take in, leaving us a bit stunned at the turn.

Mozgala’s depiction of the sly Richard is delightful and cunning, even when the piece goes dark. His energy and command of the stage is impressive as he barely has a moment when he’s not center stage, surrounded by school lockers and castle fortifications, designed creatively by Wilson Chin (MTC’s Cost of Living), with playful costumes by Junghyun Georgia Lee, solid lighting by Miriam Nilofa Crowe (BAM’s Symphony for the Dance Floor), and sound by Fabian Obispo (Public’s Oedipus El Rey). The play finds its power in its connection to the sardonic and the sour, while also holding tight to the engaging realness of these teenagers.  Lady Anne’s fate is a surprise, as is the mayhem that ensues after the brilliantly choreographed moment between Richard and Anne Margaret, created skillfully by Jennifer Weber (Ars Nova/Ma-Yi’s KPOP). The destruction that comes from social media is perplexing and highly dramatic, maybe more than this high school story can hold, but the overall impact is cheerfully bitter and insightfully twisted. “A horse, a horse, my kingdom for a horse!” but in this case that horse materializes in the form of a powerful SUV. What it brings forth in the end definitely has a different edge than Shakespeare’s. “If that makes me the villain, welllll… You already knew I wasn’t the hero from the moment I came limping your way.” There is no Richmond, the hero who kills Richard in the final duel on the battlefield, subsequently succeeding him to the throne as King Henry VII. But maybe Lew is suggesting that there is quite another kind of metaphorical death that sits just as powerfully within high school. The playwright had some pretty big and inclusive ideas for this modern update of the angry Richard. Luckily, he found the perfect platform and the most excellent star to play this man, turning the thoughtful and demanding playfulness into a delightfully relevant and entertaining romp through the high school hallways of Roseland.